At least once in his lifetime, every programmer must have written some sort of image viewer. Long time ago, the challenge is to understand the magical combination of those VGA registers tweaks, the machinery behind decoding different complicated image formats, and other low-level related stuff. These days, especially using modern toolkits, an image viewer is like a tutorial project which would be completed in one or two hours. Hence, let us raise the bar a bit higher: what if the view should be able to display the images not only from local disks, but from somewhere out there? Apparently, using QNetworkAccessManager, a module available since Qt 4.4, it could be more easier.

After the image viewer is launched (it will show the picture of a place in Paris), now you can open your favorite web browser, go to web sites which have photo gallery (say Flickr or Picasa Web Albums), and then drag the image there and drop it in this viewer. Basically, the viewer gets the URL and uses the above mentioned network access manager to download the image, and then finally displays it. 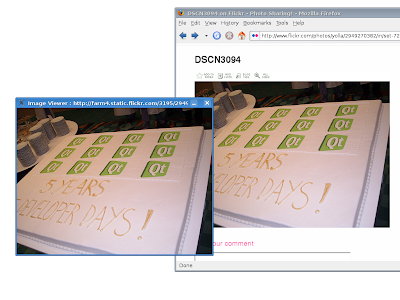