OpenStreetMap and Qt and (S60)

Like I promised few days ago, here is the demo that shows tile-based OpenStreetMap rendering on Qt/S60. If you never heard of OpenStreetMap before, it is "a collaborative project to create a free editable map of the world" (from its Wikipedia entry). You can try it at www.openstreetmap.org. It might not be as complete as other maps solutions, but surprisingly, OpenStreetMap coverage for many world big cities are detailed enough for most users.

The approach used in this example is by showing prerendered tiles stored as pixmaps, often known as Slippy Map. Of course, we also need to honor the tile usage policy. Much to my surprise, it takes only around 200 lines of code to achieve basic rendering, including tile downloads (via QNetworkAccessManager) and simple disk caching (thanks to QNetworkDiskCache). Add another 100 lines to support panning via mouse dragging and arrow keys. To have some more fun, I also brought the magnifying glass and night mode features and the total code is still less than 600 lines (which was good, as it did not cost me any sleepless night). On top of that, it also runs on Qt/S60 Tower release. Isn't Qt wonderful? 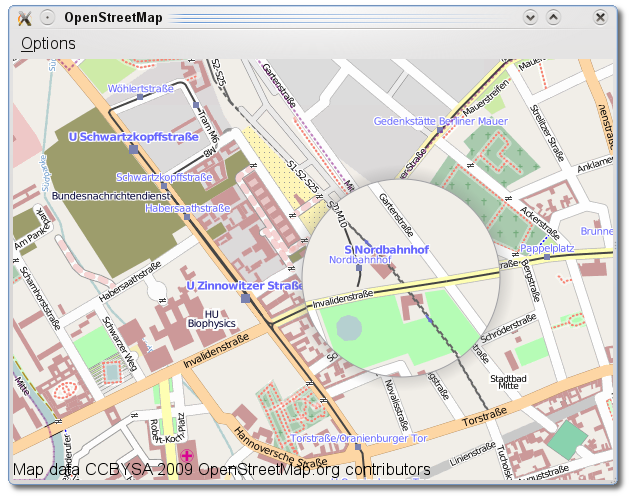 While the screenshot above serves as a solid proof, these days nothing is more fascinating than watching a videocast from our very own Mr. Portale. See below or watch directly (on YouTube):

This simple maps exampe, dubbed lightmaps (remember Quake source code, anyone?) can be found in the Graphics Dojo repository. You need Qt 4.5, either the desktop or mobile version. So far it has been tested on touch devices like Nokia N97 and Nokia 5800, but it does work also on other phones like Nokia E71.

For the sake of keeping the example simple, I did put only minimal error handling and a very simple tile cache system. This means, the first time you want to zoom with the magnifying glass (tap and hold for a while with touch device, press middle button in the D-pad for other devices), there is a potential delay until the magnified portion is rendered. Since the tile pixmaps are cached, the next attempt will likely result in a faster painting.

What about vectorial rendering of the maps? While that would be a perfect solution (even allows semi 3-D with nice transformation like in common navigation system), unfortunately I believe the amount of code will exceed the suitable size for a typical example program. Of course, this feature along with other possible improvements (custom zoom level, search function, tiles prepackaging, more optimal tile caching, and soon) are always left as exercises for the brave readers.

I hope you are inspired to map-enable your cool apps. No more excuse! :)

Monthly subscriptions are back!