By popular demand, I have refactored the magnifying glass trick previously featured in Google Maps and OpenStreetMap demos into its own, simpler example. This time we just zoom in an image so it's pretty straightforward and easier to digest. The proof is the following screenshot. 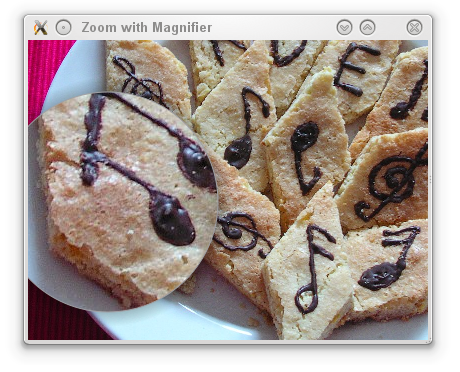 Of course, it also runs on Qt for Symbian.

The code is available from the Graphics Dojo repository, find it in the imgzoom subdirectory. It weighs at less than 250 lines of code.

On a related note, if you compile Qt 4.6 branch for Symbian, you will find out that some of my demos previously shown in this Qt Labs, among others ray casting (now should also work on touch devices), maps, flight tracking, weather info, kinetic scrolling, flipping clock, have "graduated" to become real examples, even can be accessed from the infamous Fluid Launcher. What does it mean? If hitherto you haven't tried them yet because you don't bother to mess up your system with all the build procedures, just grab the (daily) Qt 4.6 for Symbian binary package and now you can enjoy the examples. No more excuse :)