Showcasing a New Era of Automotive HMIs with a 3D UI Powered by Qt Commercial 4.8

At Qt Developer Days 2011 Munich, Digia, Qt Commercial demonstrates a new concept of a 3D automotive Human-Machine Interface (HMI) powered by the upcoming Qt Commercial 4.8. The concept will be used as a new platform of innovation that enables easy integration and showcases new technology concepts.

The interaction design of the 3D HMI is based on a concept that is easy and intuitive to use. The user is able to control the UI with swipe gestures instead of precise pointing. Because the system automatically focuses on the information most relevant to the context it is easy to master the increasing amount of information provided by the vehicle via intelligent reminders, navigation, entertainment, and traffic control systems. 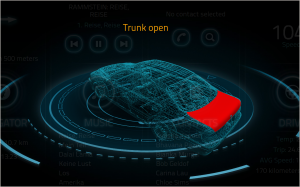 3D technologies leveraging OpenGL through Qt OpenGL C++ API give easy to understand visual guidance for the maintenance and operation of the vehicle. For example, common items such as tire-pressure level, diagnostics information and safety notifications are now visualized via the 3D model of the vehicle making it intuitive for the user to understand at a simple glance what the system is indicating. In the future, we will integrate the use of other systems such as sonar, intelligent cruise control and rearview camera capabilities.

What’s it Running On?

At Qt Developer Days 2011 Munich, Digia is demonstrating the new concept running on Linux on an embedded hardware with TI’s OMAP4 ARM- based processor running at 1 GHz. The 3D parts are HW accelerated using the built-in GPU of the processor. By leveraging the cross-platform capabilities of Qt Commercial, it is easy to run the same code on a large number of other HW platforms and operating systems.

The new concept has been created to allow multiple input mechanisms including direct touch control, trackpad and speech recognition. Digia aims to further develop the concept, which will be later made available as source code to Qt Commercial licensees.