Most people feel more comfortable using applications in their native language. To attract as many users as possible for your apps, you should localize the apps to the languages spoken by the users in the regions that you target. Qt makes this easy by providing tools for localizing C++ and Qt Quick apps into local languages.

Let's use the Quick Forecast app to illustrate the steps in localizing apps. 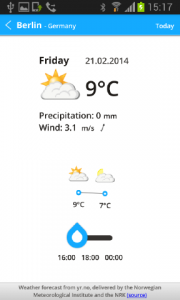 If you want to try running Quick Forecast yourself:

The steps to localize apps include creating translatable apps, preparing them for translation, using Qt Linguist to translate the apps, and creating run-time translation files for use by the released app.  This blog post covers the basics, whereas the Qt Linguist Manual describes the translation process and all the options you have in detail.

To make an app translatable, you must make some changes in the project file, source files, and the main.cpp file. In the project file, you must list the files that contain translatable strings and list the languages that they will be translated to. In the source files, you add commands to mark strings translatable and comments to help the translators understand how the strings are used in the UI. In the main.ccp file, you add code to instruct the application to load the translated strings.

The lupdate tool extracts user interface strings from your application sources. It reads the Quick Forecast project configuration file, weatherapp.pro, to identify which source files contain text to be translated. This means your source files must be listed in the SOURCES or HEADERS entry in the .pro file. If your files are not listed, the text in them will not be found.

However, the SOURCES variable is intended for C++ source files. If you list QML or JavaScript source files there, the compiler tries to build them as though they were C++ files. As a workaround, you can use a conditional statement so the lupdate tool sees the .qml files but the C++ compiler ignores them. You can use wildcards to specify the files:

The options you have are described in Qt Linguist Manual: Developers.

To tell lupdate which translation files to create and update, add the target languages to weatherapp.pro. The following code creates translation source files for German and French:

To add other languages, use the ISO 639-1 language codes. For more information about the supported languages and writing systems, see Internationalization with Qt.

For lupdate to find the strings, you need to mark all the text strings that are visible to users translatable in the source files. For QML, you use the qsTr() function, as follows:

All the options you have are described in Internationalization and Localization with Qt Quick.

To make the translators' job easier, you should identify the context in which the phrases appear. The translators will see the following comments in Qt Linguist:

Making the App Aware of the Translations

To enable the application to load the translation files according to the current locale at runtime, add the following code to the main() function in the main.cpp:

You must now put on the hat of a release manager and run the lupdate tool to generate the first set of translation source (TS) files with all the user-visible text but no translations. Switch to the folder that contains the project files and run lupdate. You need to specify the full path to the lupdate tool in the bin directory in the Qt 5 installation directory as a part of the command. For example, on Mac OS X, you might enter the following command:

Usually, you would now deliver the TS files to translators for translating the user visible strings. As you are playing all the roles this time, it is the time to change hats again.

Start Qt Linguist (located in the bin directory in the Qt installation directory) and select File > Open to open the TS file to translate. We will use QuickForecast_de.ts as an example.

Qt Linguist displays the translatable strings in the application. 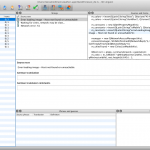 You still need to embed the QM files in the app resources. The simplest way to do so is to create a resource file called translations.qrc that lists the QM files:

Note that Qt Linguist lrelease tool creates by default the QM files in the project directory and you must move them to the translations directory for the example code to work.

For an example of using Qt Creator to create resource files, see Creating a Qt Widget Based Application.

You must also add translations.qrc as a value of the RESOURCES variable in weatherapp.pro:

There are some ways in which you can automate the generation of QM files and embedding them in the application resources. We use one such method in the Quick Forecast source files, which are available from: https://qt.gitorious.org/qt-labs/weather-app. The method is described on the Automating Generation of QM Files wiki page.

Building and Running the App

You can now test the translations by building the app and running it on a German speaking mobile device:

You can use Qt Creator to easily build apps and run them on desktops and mobile devices.

Qt Weekly is a new blog post series that aims to give your daily Qt usage a boost. Stay tuned for next week's post!