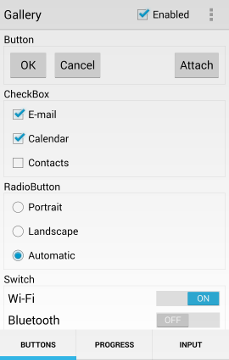 As you might have heard, the upcoming Qt 5.4 release delivers a new Android style. This blog post explains what it means in practice for different types of Qt applications.

Earlier it has been possible to get native looks for Qt Widgets applications on Android with the help of Ministro, a system wide Qt libraries installer/provider for Android. In Qt 5.4, selected parts of Ministro source code have been incorporated into the Android platform plugin of Qt. This makes it possible for Qt applications to look native without Ministro, even though applications wishing to use services provided by Ministro will continue to do so. In other words, Qt Widgets applications will look native regardless of the deployment method; system wide or bundled Qt libraries.

The big news is that Qt 5.4 ships a brand new Android style for Qt Quick Controls. A glimpse of the style in action can be seen in the attached screenshot of the Gallery example taken on a Nexus 5 running Android KitKat 4.4. By the way, the Android style requires Android 3.0 (API level 11) or later. On older devices, a generic QML-based fallback style is used instead. 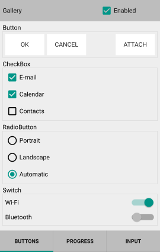 Mobile platforms keep moving at a fast pace. While we were working hard to deliver a generic native style that works on any Android version 3.0 or later, a new major version of Android was released. Android 5.0 aka Lollipop introduces a new Material design. It comes with so many changes to the underlying platform style, that we haven't had enough time to catch up with all of those.

Unfortunately, the Material theme support is not yet on an acceptable level. Qt 5.4.0 applications will therefore default to the Holo theme on Android 5.0. The most notable issues are broken disabled states and some missing tint colors, ripple effects and busy/indeterminate animations (QTBUG-42520 and QTBUG-42644).

For the curious ones who cannot wait until the remaining issues have been tackled, it is possible to set the Material theme in AndroidManifest.xml:

The same method can be used for setting the light or dark Holo theme for an application, for example. The values are "Theme.Holo.Light" and "Theme.Holo", respectively.