We are happy to announce the release of Qt Creator 3.5.0.

The most apparent new feature in this version is probably the highlighting that we added to the editors' vertical scroll bars. You can now easily see where
bookmarks, breakpoints, warnings, errors and search results are located in the open document. 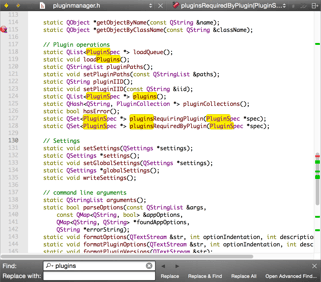 We also improved the performance of the global searches in Qt Creator. While the code model based searches like Find Usages were always multi-threaded, that wasn't the case for the purely text based searches, which is fixed now.

Qt Creator's own C++ code model received many fixes, for example for many issues with templates again. There also was much progress with the Clang based code model, which is now running in a separate process, which should make us safer from bugs in Clang itself. We also upgraded our binary packages to use Clang 3.6.

We also removed support for BlackBerry 10 development, lacking a maintainer. QNX development is not affected by this.

On Windows, we fixed an issue that could lead to Qt Creator sometimes freezing for some seconds when a user application was running. On Linux, we fixed a performance issue when Qt Creator was compiled with journald support. For Android development, we fixed issues with Android M, 64 bit, and Google AVDs.

Of course this is just a very small excerpt of the full list of changes. Please have a look at our change log for more details. Many thanks go to all the contributors that made this release happen!