Now that the alpha release for Qt 5.6 is here, it is time to take a look at some of the new features. With the increasing availability of GPUs and drivers capable of OpenGL ES 3.0 and 3.1 in the mobile and embedded world, targeting the new features these APIs provide has become more appealing to applications. While nothing stops the developer from using these APIs directly (that is, #include <GLES3/gl3.h>, call the functions directly, and be done with it), the cross-platform development story used to be less than ideal, leading to compile and run-time checks scattered across the application. Come Qt 5.6, this will finally change.

Support for creating versioned OpenGL (ES) contexts has been available in Qt 5 for some time. Code snippets like the following should therefore present no surprises:

It is worth pointing out that due to the backwards compatible nature of OpenGL ES 3 this may seem unnecessary with many drivers because requesting the default 2.0 will anyway result in a context for the highest supported OpenGL ES version. However, this behavior is not guaranteed by any specification (see for example EGL_KHR_create_context) and therefore it is best to set the desired version explicitly.

So far so good. Assuming we are running on an OpenGL ES system, we now have a context and everything ready to utilize all the goodness the API offers. Except that we have no way to easily invoke any of the 3.0 or 3.1 specific functions, unless the corresponding gl3.h or gl31.h header is included and Qt is either a -opengl es2 build or the application explicitly pulled in -lGLESv2 in its .pro file. In which case we can wave goodbye to our sources' cross-platform, cross-OpenGL-OpenGL ES nature.

For OpenGL ES 2.0 the problem has been solved for a long time now by QOpenGLFunctions. It exposes the entire OpenGL ES 2.0 API and guarantees that the functions are resolved correctly everywhere where an OpenGL context compatible with either OpenGL ES 2.0 or OpenGL 2.0 plus the FBO extension is available.

Before moving on to introducing the counterpart for OpenGL ES 3.0 and 3.1, it is important to understand why the versioned OpenGL function wrappers (for example, QOpenGLFunctions_3_2_Core) are not a solution to our problem here. The versioned wrappers are great when targeting a given version and profile of the OpenGL API. However, they lock in the application to systems that support that exact OpenGL version and profile, or a version and profile compatible with it. Building and running the same source code on an OpenGL ES system is out of question, even when the code only uses calls that are available in OpenGL ES as well. So it turns out that strict enforcement of the compatibility rules for the entire OpenGL API is not always practical.

To overcome all this, Qt 5.6 introduces QOpenGLExtraFunctions. Why "extra" functions? Because adding all this to QOpenGLFunctions would be wrong in the sense that everything in QOpenGLFunctions is guaranteed to be available (assuming the system meets Qt's minimum OpenGL requirements), while these additional functions (the ES 3.0/3.1 API) may be dysfunctional in some cases, for example when running with a real OpenGL (ES) 2.0 context.

The usage is identical to QOpenGLFunctions: either query a context-specific instance from QOpenGLContext via QOpenGLContext::extraFunctions() or subclass and use protected inheritance. How the functions get resolved internally (direct call, dynamic resolving via dlsym/GetProcAddress, or resolving via the extension mechanism, i.e. eglGetProcAddress and friends) is completely transparent to the applications. As long as the context is OpenGL ES 3 or a version of OpenGL with the function in question available as an extension, it will all just work.

As an example let's try to write an application that uses instanced drawing via glDrawArraysInstanced. We want it to run on mobile devices with OpenGL ES 3.0 and any desktop system where OpenGL 3.x (compatibility profile) is available. Needless to say, we want as little branching and variation in the code as possible.

For the impatient, the example is part of Qt and can be browsed online here.

Now let's take a look at the most important pieces of code that allow the cross-OpenGL-OpenGL ES behavior.

This looks familiar. Except that now, in addition to opting for version 3.0 with OpenGL ES, we request 3.3 compatibility when running with OpenGL. This is important because we know that instanced drawing is available there too. Therefore glDrawArraysInstanced will be available no matter what.

The fact that we are doing runtime checks instead of ifdefs is due to the dynamic OpenGL implementation loading on some platforms, for example Windows, introduced in Qt 5.4. There it is not necessarily known until runtime if the implementation provides OpenGL (opengl32.dll) or OpenGL ES (ANGLE).

Note that it may still be a good idea to check the actual version after the QOpenGLContext (or QOpenGLWidget, QQuickView, etc.) is initialized, just to be safe. QOpenGLContext::format(), once the context is sucessfully create()'ed, always contains the actual, not the requested, version and other information.

Astute readers may now point out that it should also be possible to request an OpenGL ES context unconditionally in case GLX_EXT_create_context_es2_profile or similar is supported. This would mean that instead of branching based on openGLModuleType(), one could simply set the format's renderableType to QSurfaceFormat::OpenGLES. The disadvantage is obvious: that approach just won't work on many systems. Hence we stick to compatibility profile contexts when running with OpenGL.

What's this? Our shader code is written in the modern GLSL syntax and is simple and compatible enough between GLSL and GLSL ES. However, there is a one line difference we have to take care of: the version directive. This is easy enough to fix up.

Note that with OpenGL implementations supporting GL_ARB_ES3_compatbility this is not needed as these should be able to handle 300 es shaders too. However, in order to target the widest possible range of systems, we avoid relying on that extension for now.

And here's why this is great: the actual API call is the same between OpenGL and OpenGL ES, desktop and mobile or embedded platforms. No checks, conditions, or different wrapper objects are needed.

Below a screenshot of the application running on a Linux PC and on an Android tablet with no changes to the source code. (What's better than a single Qt logo? A Qt logo composed of 1152 Qt logos of course!) 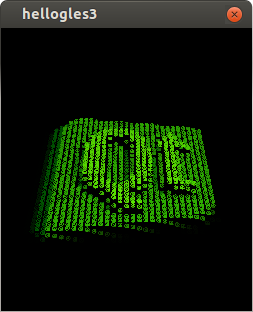 The hellogles3 example running on Linux. Make sure to check it out live in all its animated glory as the photos do no justice to it.

To summarize which API wrapper to use and when, let's go through the possible options:

Before going back to coding, an additional issue needs explaining: what about the GL_* constants and typedefs? Where do the OpenGL ES 3.x specific ones come from if the application does not explicitly include GLES3/gl3.h or gl31.h?

As a a general rule Qt applications do not include OpenGL headers themselves. qopengl.h, which is included by the QOpenGL class headers, takes care of this.

So in many cases it will all just magically work. There is a problematic scenario, in particular on mobile, though: if only gl2.h was available when building Qt, then applications will not get gl3.h or gl31.h included automatically even if the SDK against which applications are built has those. This can be a problem on Android for example, when Qt is built against an older NDK that does not come with ES 3 headers. For the time being this can be worked around in the applications by explicitly including gl3.h or gl31.h guarded by an ifdef for Q_OS_ANDROID.

That is all for now. For those wishing to hear more about the exciting news in Qt's graphics world, Qt World Summit is the place to be. See you there in October!