Check out the following video to see the latest version of the Qt Virtual Keyboard in action: 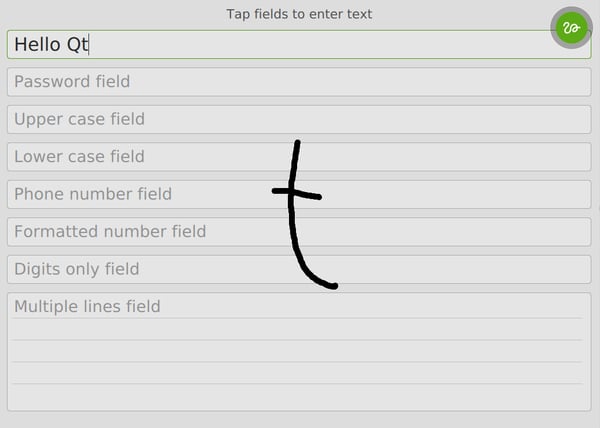 We are using Lipi toolkit as an open source alternative handwriting recognition engine. Based on the technology preview, we found out that it did not perform well enough on low-end hardware. One obvious reason for this is that the Lipi toolkit was not optimized to run on embedded devices. We conducted some analysis and the performance is now improved by code-level optimization. With that, we have improved the performance by a neat 10-40% in recognition and data model loading!

The Qt Virtual Keyboard runs the HWR tasks in a separate background thread. This allows the UI thread to continue its operation while the HWR tasks are running. But the recognition results could be produced even faster by starting the recognition already while waiting for the timeout of the user input.

Nuance T9 Write is a commercial HWR engine, which can be enabled at compile time, if the user has a suitable license from Nuance. It is much faster than the Lipi toolkit on embedded hardware. Nuance T9 Write engine is integrated to Qt Virtual Keyboard as an alternative recognition engine for HWR mode. The initial Nuance T9 Write integration supports Latin languages, and is implemented in such a way that it is easy to support also the non-Latin languages in future releases. The integration can also be used with the on-top writing mode. Current support contains x86 and ARM targets.

Added word reselect feature for Hunspell input method. The word reselect allows the user to activate predictions / spell corrections for an existing word by touching the word in the input field. Before it was not possible to reselect a word.

Support for runtime language switching from the application

The type of available input methods is configured at compile time.

Handwriting, the essential input method for a successful User Experience