We are happy to announce the release of Qt Creator 4.0.0. Starting with this release, we are making the Clang static analyzer integration, extended QML profiler features and auto test integration (experimental) available under open source. The previously commercial-only connection editor and path editor of Qt Quick Designer were already open sourced with Qt Creator 3.6.0. Qt Creator is now available under commercial license and GPLv3 (with exceptions). The exceptions ensure that there are no license restrictions on generated code, and that bridging to 3rd party code is still possible. You can read more about this change in the blog post announcing it. 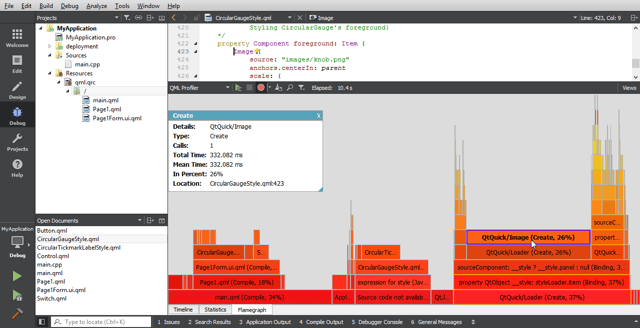 Users of CMake will find that we improved the workflow for CMake-based projects. CMake is now triggered automatically when necessary, and kit settings like the used Qt version or tool chain are automatically configured. Projects mode now features a UI to change the CMake configuration for a build directory. You can also change the CMake configuration that is common to all projects that use the same kit. Qt Creator will no longer create CMake build directories before the project is built. This makes for a much tidier work environment, especially when users only want to study source code using the CMake build system.

The Clang code model is now automatically used if the (experimental) plugin is turned on. We added customizable configurations for warnings, which you can also specify per project.

On the debugging side we fixed multiple issues that appeared with the new LLDB included in Xcode 7.3 on OS X. You'll also find more pretty printers for standard types, as well as many bug fixes.

If you wonder where Analyze mode has gone: It was merged with Debug mode. In the new, unified Debug mode you now find the Debugger, Clang Static Analyzer, Memcheck, Callgrind and QML Profiler tools. The QML Profiler adds a new visualization of statistics: The Flamegraph. In this view, the horizontal bars show the amount of time all invocations of a function took, and vertical nesting on top shows which functions were called by which other ones, making for a very concise overview.

Qt Creator now also has a new, flat theme, which is based on the concept that Diana presented a year ago. It is default for everyone who hasn't ever changed the theme in Qt Creator. The old theme is also still available as "Classic" in Tools > Options > Environment > Interface.