We are happy to announce the release of Qt Creator 4.1.0 Beta1. 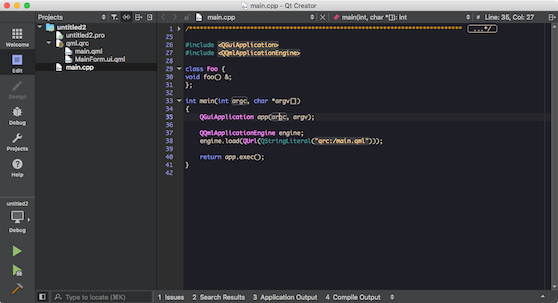 What could be said to be the most visible new feature, if you turn it on, is that we added the Flat Dark and Flat Light themes. These are the continuation of the effort to implement the concept design by Diana, and complement the Flat theme, which is a light theme with dark tool bars that was introduced with Qt Creator 4.0. You can change the theme in the Environment > Interface > Theme settings and try them.

A feature that should be mostly invisible, is that Qt Creator now automatically releases resources of documents that are not modified and have not been in your focus for a longer time (meaning: that moved a certain way down in your document history). We actually have a related feature since a long time already: When we restore a session, only the visible documents are loaded into editors, even though the others appear in the Open Documents pane and other document choosers. Opening them will also restore editor state, like scroll and cursor positions. Documents can now fall back into that state even after they were loaded. This avoids Qt Creator accumulating system resources, without the need for the user to manually close documents. You can configure this behavior in the Environment > System settings.

The text editors have received another long wished for improvement. You can now separately define if brackets or quotes are automatically added while typing. There are also separate settings if typing the character manually will then replace the automatically inserted character, and if deleting the originally typed character will remove the automatically inserted counterpart. Additionally the latter two features should behave more natural, because they are only active as long as the text cursor does not move away from the location where the counterpart character was added. Find the new options in the Text Editor > Completion settings.

We have updated our binary packages to use Clang 3.8, which fixes many issues with parsing MSVC 2015 standard headers with the Clang code model. We also separated the color scheme setting for function declarations and usages, and added a new one for global variables.

If you are working with Qt Quick, you might be happy to hear that we greatly improved the overall performance of Qt Quick designer, by optimizing the process of updating the QML document when changes happen. You can now also choose the Qt Quick Controls 2 style that your items should be rendered in.

We also improved the the performance of the QML Profiler in the presence of many events.

Other Additions and Improvements

We further improved the CMake project support that was overhauled in Qt Creator 4.0. You now have the option to turn off automatic running of CMake per configured tool (Build & Run > CMake). It is now also no longer run automatically if Qt Creator is not the active application. We also improved the parsing of CMake errors, and fixed an issue with the ordering of include paths that are passed to the code model.

Because of the efforts of Filippo Cucchetto we now also have experimental support for the Nim programming language. (Turn the plugin on in Help > About Plugins, or Qt Creator > About Plugins on macOS.) It includes syntax highlighting, indentation, coding style settings, and simple project management supporting building, running and debugging applications. Many thanks to him for this contribution!

There have been many other changes. Please refer to our change log for a more complete overview.