Qt 5.9 LTS improves Qt Quick and QML performance significantly, especially with Linux on ARM. We have worked hard to improve the performance in multiple areas: within the QML engine, Qt Quick graphics, QML Compiler and in the Qt Quick Controls, to name some examples. Performance has improved significantly across all areas, with some items being several times faster than with our previous long-term supported release Qt 5.6 LTS.

We are regularly running several different kinds of performance tests to see how the various optimizations work across different platforms. Some of these results are visible at testsresults.qt.io, while some tests have not been automated yet. Whenever possible, we are aiming to optimize the performance of all supported operating systems and CPU architectures. For readability and because Linux on ARM has been an area of particular focus with Qt 5.9 LTS, it is the one discussed in this post. Typically, the other platforms have received roughly similar improvements.

Startup time of a Qt Quick application is often critical in the embedded space. This is true for small single-process embedded systems, as well as for more complex multi-process devices. We have offered a commercial-only tool called the Qt Quick Compiler since Qt 5.3 to improve the startup time by leveraging the C++ compiler to compile QML into a normal C++ binary. Between Qt 5.6 LTS and Qt 5.9 LTS, the performance of the QML engine has improved with each new Qt release, resulting in improved application startup time. Qt 5.8 introduced QML caching, which makes second and subsequent runs of the applications to be faster. Qt 5.9 also offers a possibility to pre-populate the cache to reach improved performance already with the first run. With the Qt Quick Compiler, the first run is also already fast.

Each application has unique characteristics so the exact benefit in startup time for using Qt 5.9 LTS and/or the Qt Quick Compiler will vary. Typically, the more QML used, the bigger the improvement is. In Qt 5.9 LTS we offer two alternative options: the commercial-only Qt Quick Compiler and a new tool to populate the cache ahead-of-time, which is available for both open-source and commercial users. The performance and reduced startup time are in practice the same with both approaches in Qt 5.9 LTS.

Qt 5.9 LTS introduces a new feature to cache OpenGL shaders to disk after the first run, as explained in the blog post introducing the shader cache. If your Qt Quick application is using OpenGL shaders, which is quite often the case, it will achieve a significant improvement in startup time compared to earlier versions of Qt. When comparing the performance of Qt 5.6 LTS to Qt 5.9 LTS using the same Qt Quick application with 10 shaders, we can see a significant improvement in the initialization time of the shaders. Some of the performance improvement observed in the measurement is due to the overall improvements in the graphics performance, but most of the improvement can be attributed to the new shader cache feature.

Qt 5.9 LTS is a whopping 7x faster than Qt 5.6 LTS on startup with the same exact Qt Quick application running the same hardware. Just like the previous measurements described in the blog post, this test has also been conducted using NXP i.MX6 running Linux. The performance improvement is dependent on the hardware and especially the GPU plays a major role. Based on our measurements there are significant improvements with every piece of hardware we have tested – including ones that implement cache feature already in the OpenGL driver.

In Qt 5.8 we introduced a new configuration system and made other improvements to reduce the binary size of the Qt framework libraries used for different applications. This was developed as part of the Qt Lite project, which focused specifically on reducing the application size. With Qt 5.9 LTS we have further polished and tuned the available configurations so that more and more different kinds of applications can reach their minimal Qt configuration. Reducing the size of a Qt 5.6 LTS application is possible mainly by just using the modules needed by the application and statically linking the binary. Because of dependencies within the Qt framework, the linker is not able to reach as small binary size as it is possible with Qt 5.9 LTS using the new configuration tool.

The examples above are just some of the highlights from many improvements we have done to the performance of Qt Quick in Qt 5.9 LTS. We have tuned multiple individual areas and optimized the execution paths within the Qt framework. It is important to note that we have also worked hard not to regress in any areas. To avoid regressions, we are regularly running a comprehensive Qt Quick benchmark suite called Qmlbench. With the Qmlbench tool we can see the performance of the most commonly used Qt Quick functionality as well as the functionality that is used less frequently. For more details, please review the thorough explanation of how we are using Qmlbench to avoid regressions. 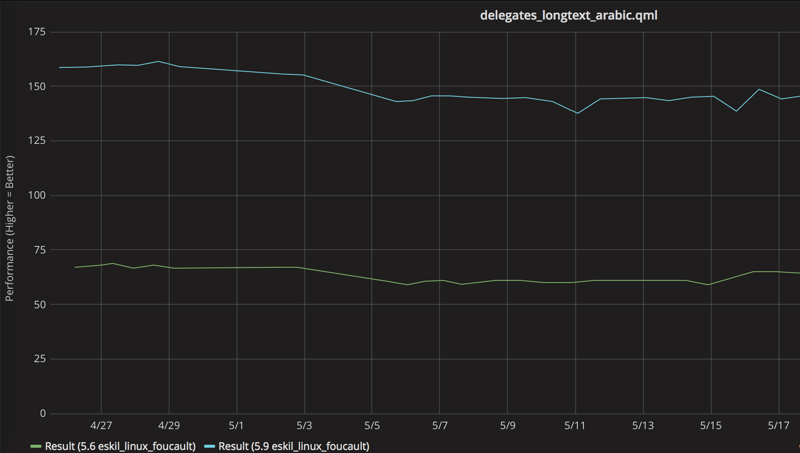 When comparing Qt 5.6 LTS and Qt 5.9 LTS in the same environment with the comprehensive Qmlbench measurements, we can see  that some areas improved up to 130% as shown in the graph above. Especially layout and complex text performance has improved drastically. The average improvement of Qt 5.9 LTS compared to Qt 5.6 LTS in all Qmlbench tests is 14% (measured on Linux). Despite which functionality is used, the improvement in performance of a Qt Quick application running Qt 5.9 LTS compared to Qt 5.6 LTS is clear and tangible for most applications.

Interested in taking a closer look? Qt 5.9.0 has been released today. You can get it with your online installer, from the Qt Account or from the Qt Downloads page (for open-source users).