As you may remember we announced in February that we are working on a new 3D design tool called Qt 3D Studio, which is based on a major contribution from NVIDIA. Now we are happy to announce that the code has been pushed into the Qt Project repositories and binary snapshots are available through the Qt online installer.

What is Qt 3D Studio? 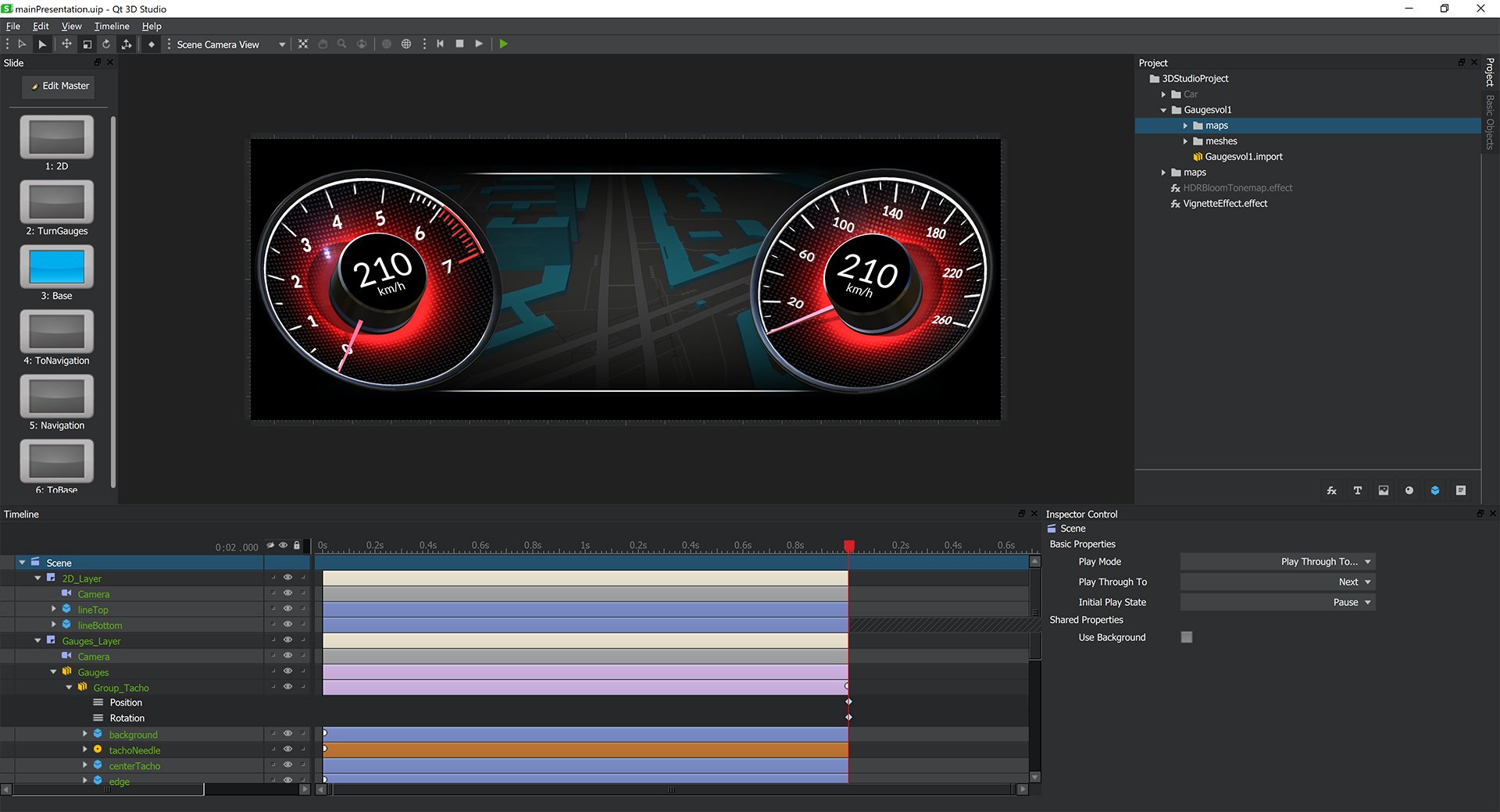 What has been done in the past 7 months?

Quite some time has passed since the contribution from NVIDIA was received and some may wonder what have we been up to. As the original application was implemented mostly with Windows only MFC we wanted to port it to Qt first before opening the repositories. We have also been cleaning out many of the originally used 3rd party libraries as Qt provides the needed functionality already.

Here are a few items we been working with: 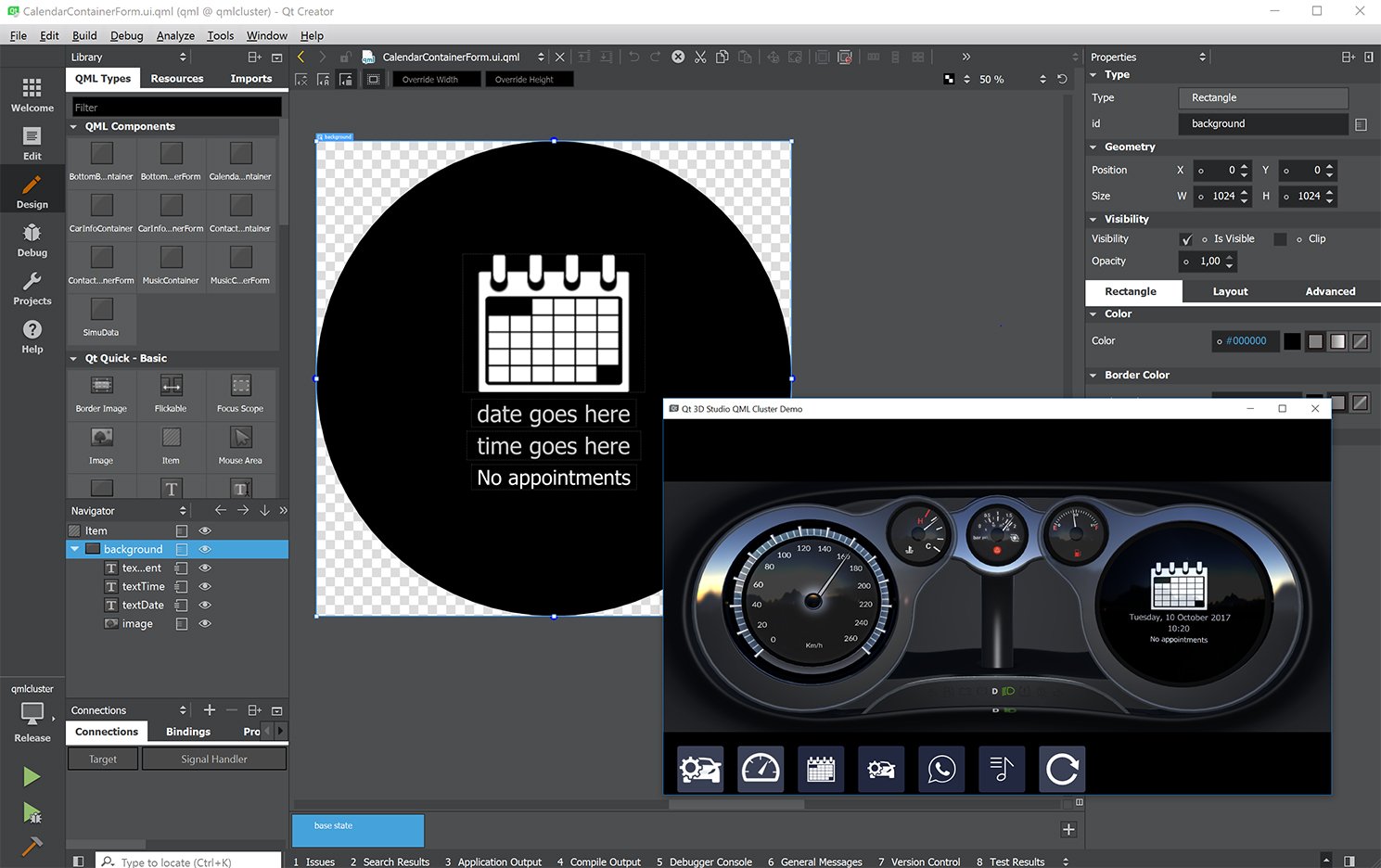 In this example the 3D scene contains gauges that have changing content. Gauges have been implemented with 3D Studio which enables use of real time shading and lighting effects. Qt Quick user interfaces (e.g. calendar, music player contacts) are rendered as textures into gauges. Qt Quick application also manages the 3D user interface states changes through the Qt Quick API. 2D parts of the user interface have been designed with Qt Quick Designer.

We are working hard to get the first official release of the new Qt 3D Studio ready by end of November. Multiple pre-release snapshots will be made available and we are interested in receiving bug reports from the pre-releases and perhaps even some code contributions. After the 1.0 release we are planning the make patch releases as needed, and possibly also 1.x feature releases. In May 2018 we are planning to release 2.0 version bringing a new runtime on top of Qt 3D. Applications created with 1.0 are fully compatible with 2.0, just the runtime is changed to allow better portability and other benefits provided by Qt 3D.

We have been running an early access program for key customers and selected partners. Working closely with some of the customers has provided us with a valuable feedback on the features and tool usability. We  have also conducted a series of usability tests for finding common problems when users start using the tool for the first time. We have been able to include fixes for some of these findings already into the forthcoming 1.0 release.

First official release is scheduled for the end of November. The whole Qt 3D Studio user interface has been ported to Qt which makes this the first cross-platform release i.e. Windows, Mac and Linux are supported. We have also introduced a remote deployment feature to Qt 3D Studio Viewer which enables automatically seeing design changes live in the target device or for example an Android tablet.

2.0 Release scheduled in May 2018 will introduce a bigger architectural change where the NVIDIA rendering engine will be replaced with a new rendering engine built on top of Qt 3D. From user perspective this change should not introduce any discontinuity i.e. all projects implemented with Qt 3D Studio 1.0 are working with Studio 2.0 as is. After these changes we have the full ability to implement new features and improvements both on UI level and 3D rendering.