Together with engineers from KDAB and the Qt community, we are continuing to improve performance and stability of Qt3D. Back in November, I wrote about how we have reduced CPU usage in Qt3D. In this post I would like to share some improvements we have made to reduce memory consumption.

Qt 3D has a flexible architecture that separates the frontend, which runs on the GUI thread, from the backend, which consists of aspects responsible for rendering, input handling, and animation. The aspects are run on a separate thread and can start jobs that are run on a thread pool. This allows Qt 3D to make use of needed CPU resources in parallel, but it also means we need to keep data duplication to a minimum. By reducing the amount of duplicated data and improving the allocation strategy for backend objects, the memory usage has been significantly reduced.

Even small projects benefit from these improvements, such as the Simple C++ example, which uses no textures or other assets: 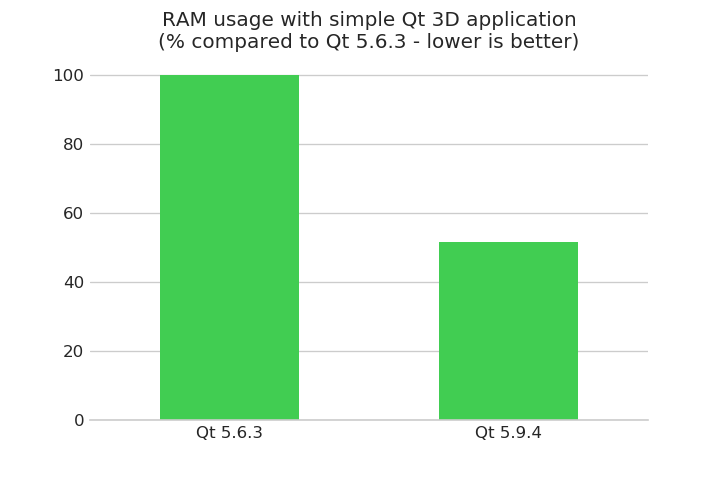 The same can be seen in more complex applications, such as this internal demo application for an automobile instrument cluster. It is using Qt Quick and Qt 3D to render the dashboard of an electric car. The demo has a number of different views for navigation, media, and a consumption overview. It also renders a live 3D model of the car with multiple textures:

We are working hard to improve performance and stability further in upcoming releases. In Qt 5.10.1 we have improved on-demand rendering performance, while in Qt 5.11 we streamline the order in which rendering jobs are executed. This ensures stability and allows for more performance improvements in the future. In later releases, we will increase data caching between frames to reduce the amount of work even further.