Now that Qt 5.11 is released, it is finally time to upgrade the last Qt 1.0 applications out there... No, not really. ;-) I want to take a look at how well we have kept compatibility in Qt over the years since the first official release.

Qt guarantees source and binary compatibility between minor releases, and we take that seriously. Making sure that you don't have to rewrite (or even recompile) your application when you upgrade to a newer version of Qt is important to us. However, there are times when we need to make bigger changes in order to keep Qt up to date. This is done in major releases. Since the release of Qt 1.0 in 1996 (almost twenty-two years ago), we have broken source compatibility four times: in 2.0, 3.0, 4.0 (some of you may remember that as a painful transition), and 5.0.

We do try to keep breakages to a minimum, even in the major releases, but the changes do add up. This raises the question: How hard would it be to port a Qt application from Qt 1.0 to 5.11?

To find an answer to this question, I took the tutorial example from the Qt 1.0 release, and tried to compile it against Qt 5. Since the Qt archives only go back to version 1.41, I actually had to retrieve it from ancient history which has been preserved through four different source code control systems ...but I digress. Its name is t14 because it is the 14th and final chapter of the tutorial.

Here are the steps I needed to make to get it to build and run.

Now we have a fully functional port of the tutorial example, and here is a screenshot:

Oops... Some of the text is clipped. It turns out that the example used hardcoded sizes and positions for most of the elements, and font sizes have changed a bit since 1996. The solution is to use QLayout, which was not available in Qt 1.0 (the first version was added in Qt 1.1, and it was completely rewritten for 2.0).

With this change, everything looks as it should: 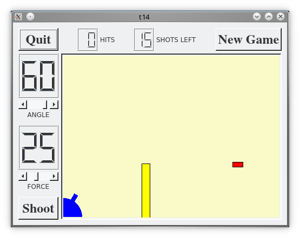 So, what did we learn? It did not take that much effort to port tutorial 14 from Qt 1.0 to Qt 5.11. It probably took me longer to write this blog post. Most of the 1.0 API still lives on in recognizable form. The incompatible changes have improved the usability, readability and safety of Qt code.

This was just a small example, of course. Porting a full-sized application across multiple major versions would probably be more difficult. Fortunately, we have a vibrant Qt ecosystem with several companies offering consultancy services .