What's new with the Wayland platform plugin in Qt 5.11?

Support for compose keys has been missing for a long time and has finally been added. That means you can now enter characters that require a sequence of keys, such as:

Starting with Qt 5.11 and Qt Creator 4.7, binaries in the official installers now also include Qt Wayland (previously you would have to build it yourself).

So the official build of Qt Creator itself now runs on Wayland, as well as the applications you build with the official Qt packages.

UPDATE: It's still unclear whether QtWayland will be in the official release of Qt Creator 4.7.0. Due to a mistake, Qt Wayland was made the default platform plugin on gnome-shell sessions in Qt 5.11. The combination of gnome-shell and Qt Wayland still results in too many bugs, and hence Qt Wayland was removed from the Qt Creator pre-release builds altogether, at least until Qt Wayland is made opt-in again. 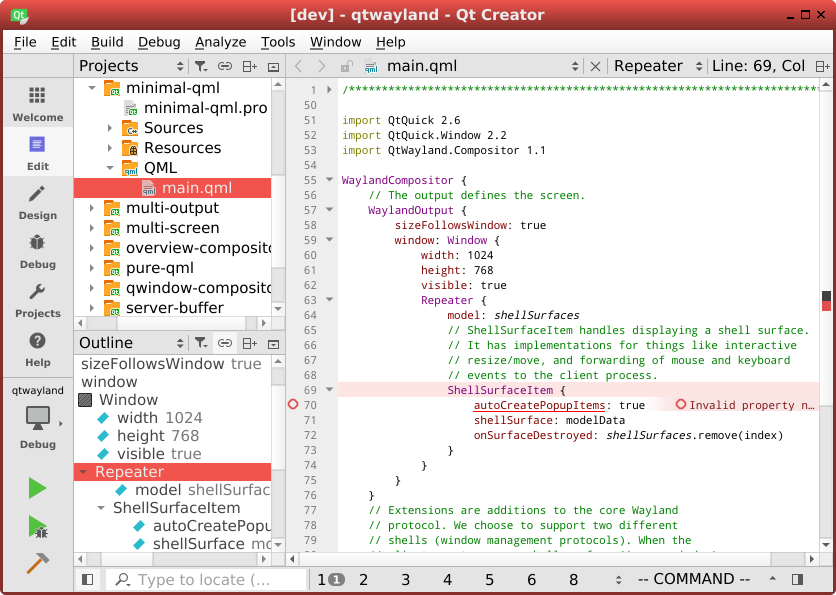 There are nightlies for QtCreator 4.7 available if you want to try it out before the official release.

Fallback to X11 if Wayland is not available

The common way of selecting a Qt platform plugin, has been to set the environment variable QT_QPA_PLATFORM=wayland. This has been a problem on Linux desktops, because some applications—for instance the official QtCreator package—use a bundled version of Qt that doesn't include Wayland, and will fail to launch with the following message:

This application failed to start because it could not find or load the Qt platform plugin "wayland" in "".

Reinstalling the application may fix this problem.

In Qt 5.11 we added support for fallback platform plugins, this means you can now set QT_QPA_PLATFORM="wayland;xcb", which makes Qt use the xcb (X11) plugin if Wayland is not available.

If you have a multi-monitor setup with both high-dpi and low-dpi screens, you'll be happy to hear that windows now switch to the appropriate scale when moved from one screen to another. No more tiny or blurry windows :)

QA-wise Qt Wayland has seen significant improvements lately. We now run a subset of the QtBase unit tests on every patch set submitted, which means we will catch more bugs earlier. However, this is a topic suitable for a separate blog post.

News from the development branch

There has also been many recent changes that didn't make it into the 5.11 release. State changes, such as resizing or maximizing have seen a lot of work. We now finally support maximizing and full screen on xdg-shell-v6. We have also added a new shell integration for xdg-shell stable.

If you want to test the new features and fixes in Qt Wayland, but don't want to wait for a release, or if you don't want to upgrade or compile all of Qt, I have set up an unofficial qtwayland-backports repository.

It contains branches with new versions of Qt Wayland that compile against older versions of Qt. I.e. if you use Qt 5.10.x, you can still test recent changes in the Qt Wayland dev branch using the dev-for-5.10 branch.

Arch Linux users can install the AUR package, qt5-wayland-dev-backport-git, as a drop-in replacement for qt5-wayland. Again, note that these backports are unofficial and there are no guarantees that I will keep updating them.