We released Qt 3D Studio 2.2 last week with a lot of cool features, explained in the release blog post. With this blog, the focus is on a couple of items provided by Qt 3D Studio 2.2 that significantly improve the performance and memory consumption. First, we'll look into leveraging texture compression to reduce RAM consumption and to improve the startup time. Later in the blog post, we'll dig into the new, still experimental, renderer provided by Qt 3D Studio 2.2. The new renderer, as well as the upcoming new animation system, is specifically developed to reduce the CPU load of Qt 3D Studio applications.

The graph below visualizes the impact of compressed textures for the RAM consumption. 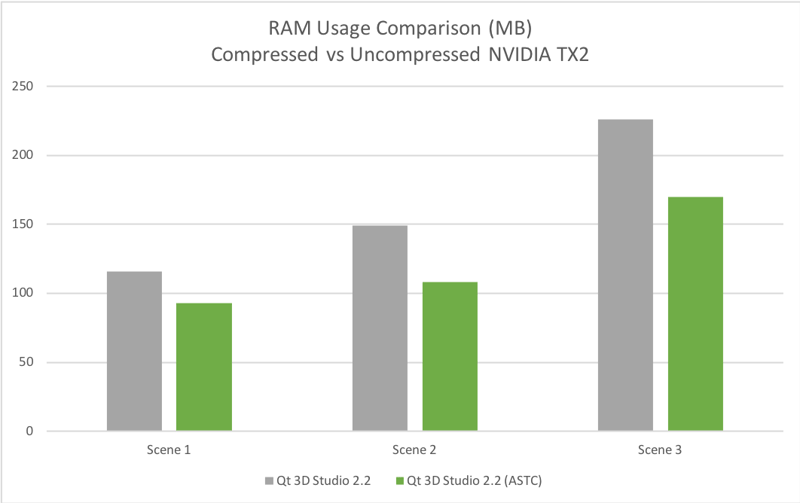 With ASTC texture compression (we have set it with 4x4 block size and linear rgb format) the memory consumption is reduced by 23MB (20%)  in the simplest Scene 1 test case, by 41 MB (28%) in the Scene 2 and by 56 MB (25%)  in the Scene 3 test (the most complex one of the three). On average, the tests using texture compression yield a 24% reduction in RAM consumption, which is quite a nice saving of that scarce RAM.

The graph below visualizes the impact of compressed textures for the startup time of the application. 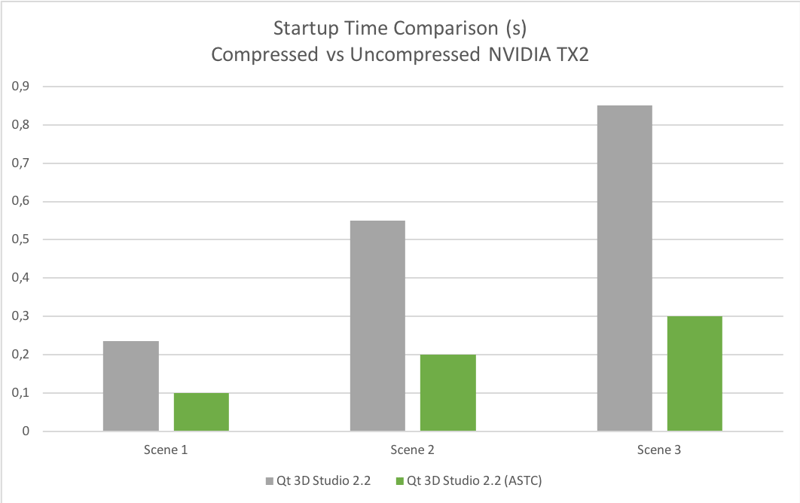 Note that all these can be directly achieved using the latest Qt 3D Studio 2.2 release and using the supported texture compression for the graphics assets.

To see the impact of the new renderer and the animation system on the CPU usage, we tested it on NVIDIA Jetson TX2 (64bit ARM embedded processor) and Intel i7-6700 equipped with NVIDIA Quadro P2000 graphics (i.e. a regular desktop PC), both running Linux as the operating system. Same test scenes as with the texture compression benchmark were used, but with no compression applied (as the texture compression is handled with the GPU, it's not so relevant for the CPU benchmarking).

The CPU load is reduced on average by 45% with the NVIDIA TX2. The reduction varies a bit between the scenes, but is roughly on the same level (38-49% improvements in the different test cases).

Running the same comparison on an Intel i7 desktop PC, the CPU load reduction is 63% on average (59-67% improvements in the different test cases).

As seen from the results, the new Dragon renderer provides important optimization for the CPU utilization. The new renderer improves the CPU usage especially in scenes where there are many objects, but only a few of them animated between frames. It detects changes in different objects and ensures that interdependent jobs only process necessary intermediate values. The new renderer alone will not improve scenes where all objects are continuously animated, but it can significantly cut down the CPU usage in certain scenes.

The animation system has also been overhauled to minimize the processing performed for animated values. Previously, animations would be offloaded to a backend job, but this turned out to degrade performance due to additional copying and processing in the offloading step. By coupling the animation system more tightly to the renderer, we have managed to bring down the CPU usage in highly animated scenes as well. The tighter coupling has also made the data flow simpler, which makes the code easier to reason about and maintain.

Getting started with Qt 3D Studio 2.2