Speed of the 3D rendering is essential for a 3D engine, in addition to efficient use of system resources. The upcoming new Qt 3D Studio 2.4 release brings a significant boost to rendering performance, as well as provides further savings on CPU and RAM utilization. With our example high-end embedded 3D application the rendering speed is improved whopping 565%, while the RAM use and CPU load are down 20% and 51% respectively.

The entry-level embedded device used in the measurement is Renesas R-Car D3, which has the Imagination PowerVR GE8300 entry-class GPU (https://www.imgtec.com/powervr-gpu/ge8300/) and one ARM Cortex A53 CPU core. Operating system is Linux.

The example application used is the low-end cluster, available at https://git.qt.io/public-demos/qt3dstudio/tree/master/LowEndCluster. The low-end cluster example is well optimized, as described in a detailed blog post about optimizing 3D applications.

The example application used is the Kria cluster, available at https://git.qt.io/public-demos/qt3dstudio/tree/master/kria-cluster-3d-demo. The Kria cluster example is made intentionally heavy with large and not fully optimized textures, high resolution etc.

In the high-end example all the gauges and other elements are real-time 3D, rendered with the Qt 3D Studio runtime. There are very few Qt Quick parts and these are brought into the 3D user interface using texture sharing via QML streams.

The biggest improvement with the new Qt 3D Studio 2.4 release is to the rendering performance - getting the same application to render more Frames Per Second (FPS) on the same hardware. As always with Qt we aim to run steady 60 FPS, but on embedded devices pure performance is not enough. When there are items like heat management and tackling different usage scenarios it typically pays off not to run on the very edge of the SoC's graphics capabilities. In the case of an application such as an instrument cluster, the performance needs to be smooth in all operation conditions, including under maximum load of the system. For measurement purposes with the high-end example we have disabled vsync, allowing the system to draw as many frames it can. In a typical real-life application there always is the vsync set, so anything that we can go over 60 FPS means saved processing resources. 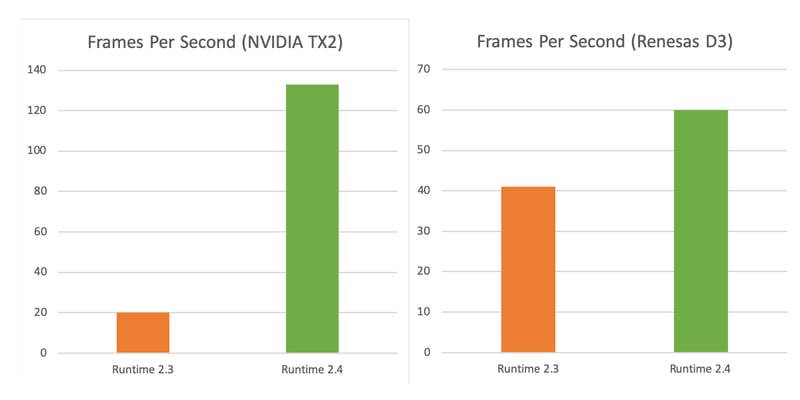 High end example: With the new Qt 3D Studio 2.4 we see a a whopping 565% improvement in the rendering performance. With Qt 3D Studio 2.3 the application was running only at 20 FPS, but the new Qt 3D Studio 2.4 allows the application to run 133 FPS. This is measured turning off vsync, just to measure the capability of the new runtime. In practice running 60 FPS is enough, and the additional capacity of the processor can be leveraged to have a larger screen (or another screen) or more complex application - or simply by not using the maximal capacity of the SoC to save on power.

Low-end example: The improvement is 46% because the maximum FPS is capped to 60 FPS by Qt Quick. With Qt 3D Studio 2.3 the application achieved 41 FPS, and with the new 2.4 runtime it reaches 60 FPS easily. Just like with the more powerful high-end hardware the excess capacity of the SoC can be used for running a more complex 3D user interface, or simply left unused.

The overall CPU load of an application is a sum of multiple things, one of them being the load caused by the 3D engine. In embedded applications it is important that using 3D in the application does not cause excessive load for the CPU. If the application exceeds the available CPU, it will not be able to render at target FPS and stuttering or other artefacts may appear on the screen. 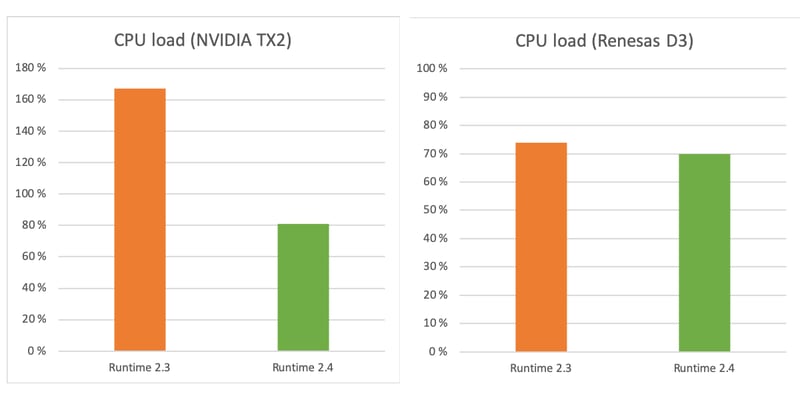 Low-end example: We see only a modest 5% improvement in the CPU load, mainly due to the application being mostly Qt Quick. But this is with FPS going from 41 FPS up to 60 FPS at the same time. It should also be noted that the CPU of R-Car D3 is not very powerful, so the increased FPS of the overall application has its effect to the overall CPU load.

For any graphics and especially 3D it is the assets that typically takes most of the RAM. There are ways to optimize, most notably avoiding unnecessary level of detail and leveraging texture compression. For the purposes of this blog post, we do not leverage any specific optimization methods. The measurements are done with exactly the same application, no other changes than using a different version of the Qt 3D Studio runtime.

Low-end Example: In the simpler example the reduction of RAM use is 9MB when using the new 2.4 runtime. Percentage-wise this is is a 15% reduction to the overall RAM usage of the application.

How was this achieved?

The improvements are really big especially on embedded, so one may wonder what was changed in the new version? What we did is to use the same runtime architecture as with Qt 3D Studio 1.x releases instead of running on top of Qt 3D. The core logic of the 3D engine is still the same as before, but it is running directly on top of OpenGL instead of using Qt 3D. This provides significantly improved performance especially on embedded devices, but also on more powerful desktop systems. By running Studio's 3D engine directly on top of OpenGL we avoid overhead in rendering and simplify the architecture. The simpler architecture translates to less internal signalling, less objects in memory and reduced synchronization needs between multiple rendering threads. All this has allowed us to make further optimizations over the Qt 3D Studio 1.x - and of course to bring the new features developed in the Qt 3D Studio 2.x releases on top of the OpenGL based runtime.

The change in 3D runtime does not require any changes for most projects. Just change the import statement (import QtStudio3D.OpenGL 2.4 instead of import QtStudio3D 2.3) and then recompilation with new Qt 3D Studio 2.4 is enough. As API and the parts of the 3D engine relevant for the application are the same as earlier, all the same materials, shaders etc work just like before. In the rare cases where some changes are needed e.g. for some custom material, these are rather small.

If you have not yet tried out the Qt 3D Studio 2.4 pre-releases, you should take that for a spin. It is available with the online installer under the preview node. Currently we have the third Beta release out and soon provide the Release Candidate. Final release is targeted to be out before end of June. Qt 3D Studio is available under both the commercial and open-source licenses.