Today, we have released Qt 5.13 and I’m really proud of all the work that everyone has put into it. As always, our releases come with new features, updates, bug fixes, and improvements. For Qt 5.13, we have also been focused on our tooling that makes designing, developing and deploying software with Qt more efficient for designers and developers alike. Let’s take a look at some of the highlights of Qt 5.13 as well as some of the updates on the tooling side.

I will also be holding a webinar summarizing all the news around Qt 5.13 together with our Head of R&D Tuukka Turunen on July 2. Please sign up and ask us your questions. 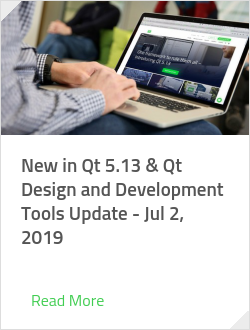 We have also collected a range of examples for Qt for WebAssembly. Check out them out here.

The Qt QML module provides a framework for developing fluid user interfaces in the QML language. We have improved the support for enums declared in C++, JavaScript “null” as binding value is now optimized at compile time, and QML now generates function tables on 64bit windows, which makes it possible to unwind the stack through JITed functions.

The standard library for writing QML applications and our UI controls for creating user interfaces have also received some updates. We have added support to TableView for hiding rows and columns and for Qt Quick Controls 2 we have added SplitView, a control that lays out items horizontally or vertically with a draggable splitter between each item. We have also added a cache property to icon.

Qt Network provides a set of APIs for programming applications that use TCP/IP and we have added Secure Channel support for SSL socket and OCSP stapling support. With Qt 5.13 are now using OpenSSL 1.1 to support SSL connections on Linux and Android.

Provides a rich set of QML types and C++ classes to handle multimedia content. We have also added gapless playback in QML VideoOutput using flushMode property, support of GStreamer for Windows/macOS and HTTP headers and audio roles for Android.

The client side of a client - KNXnet/IP server connection. This connection can be used to send messages to the KNX bus and to control the functionalities of the KNX devices typically used in building automation. With Qt 5.13, the module has received a secure client API.

The next generation of Industry 4.0 applications based on a Client / Server architecture has received some updates. Mainly, the C++ API is now fully supported and we added tech previews of a QML API and a secure client C++ API.

Qt CoAP (Constrained Application Protocol) is a client-side implementation of the M2M protocol for use with constrained nodes and networks for the internet of things. With Qt 5.13, the module has received support for Datagram TLS (DTLS) over UDP.

Qt Creator IDE has received some updates, which include an improved UI for diagnostics from the Clang analyzer tools, a QML parser update, support for ECMAScript 7 and a new performance profiling plugin for software running on Linux. You can read more about the updates to Qt Creator in the dedicated release post.

The latest edition of the Qt UI design and development tool now lets you seamlessly import your designs from Sketch (in addition to Photoshop) and turn them into QML code. Adding support for Sketch has been a sought-after request and is a popular tool for designers so this is really taking Design Studio to the next level, enabling a much smoother designer-developer workflow. In addition, support for more complex gradients from Qt Quick Shapes have been added, and various improvements and fixes have been made. We have also released a Qt Design Studio Community Edition. You can read more about it in the release blog post.

Qt for Python has received a large number of bug fixes and improvements since its first officially supported version that came with Qt 5.12.

TÜV NORD certifies that you can use Qt to build functionally safe embedded systems. The QSR 1.1 is certified based on the new edition of ISO 26262:2018 series of standards and includes Qt Safe Renderer Code, Designer and Build Tooling, ac safety manual, certification artifacts, and global Qt technical support. Our recent update allows you to render UI elements dynamically.

Engineers and UI designers can now easily embed Adobe After Effect animations directly into Qt Quick applications using the Bodymovin export format and the new Qt Lottie renderer for it. For more details have a look at the blog post about it QtLottie.

Thanks to the Qt Community

Qt 5.13 adds new functionality and improvements. Some of them would not have been possible without the help of the great community who contributes to Qt with new functionalities, documentation, examples, as well as bug fixes and reports. There are too many people to mention, but I’d like to especially thank basysKom and Witekio for their work on Qt OPC UA and QtCoAP, respectively.