This article has been co-authored by Volker Hilsheimer and Pedro Bessa.

This year, KDE organised its annual community conference, Akademy 2022, in Barcelona.
Akademy is the annual world summit of KDE, one of the largest Free Software communities in the world. It is a free, non-commercial event organized by the KDE Community. 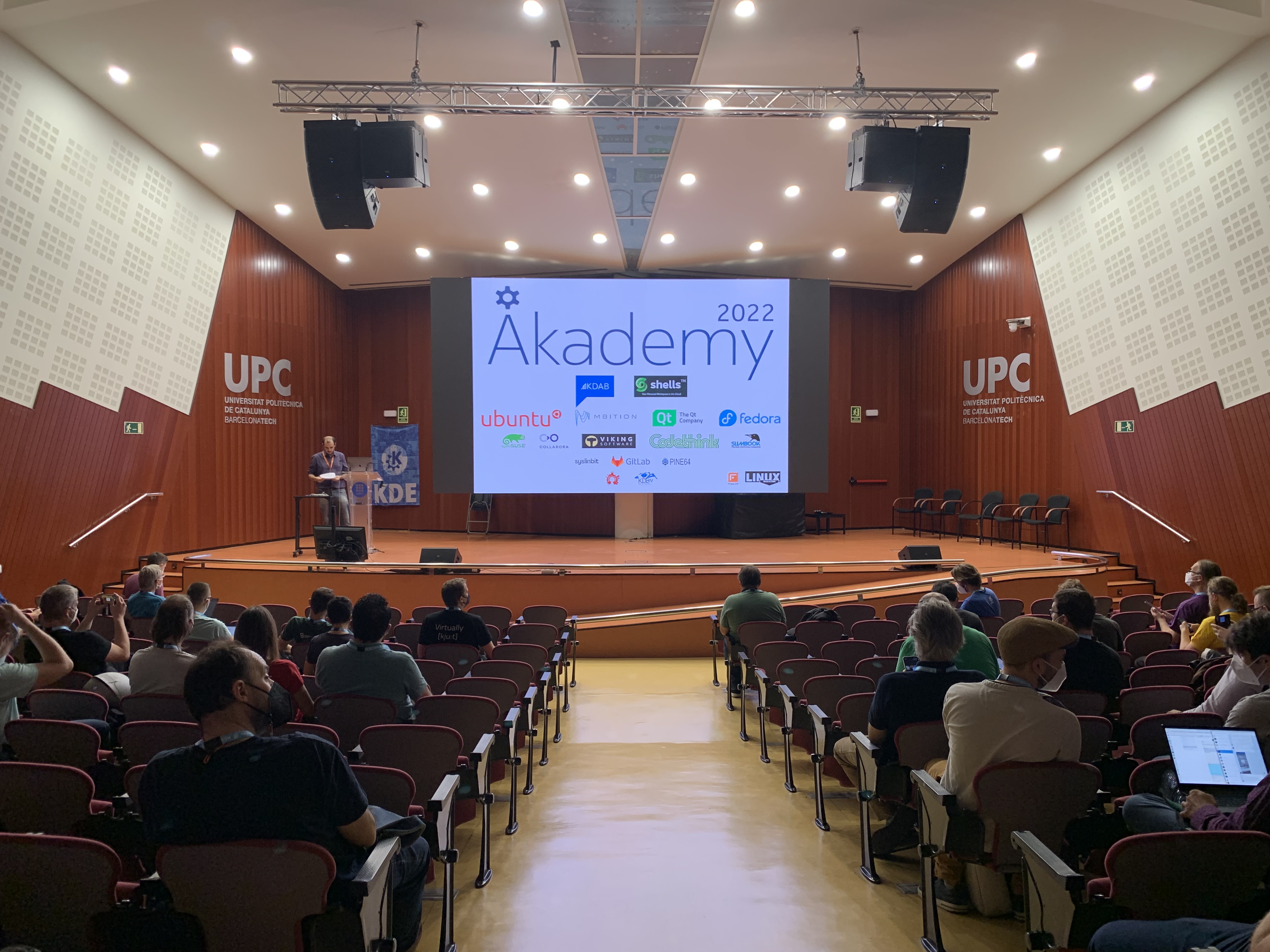 Volker Hilsheimer , Shyamnath Premnadh, Allan Jensen and I were lucky enough to attend it and meet KDE folks, among them, many Qt users.

Plasma, is a desktop environment for Linux, based on Qt. As such, it is one of the largest and most complex projects, Open Source or otherwise, using Qt. Many people that work today in The Qt Company found their way to Qt through KDE, and many contributions to Qt continue to come from the KDE community. The project was kicked off on October 14th 1996 by Matthias Ettrich with the famous "Programmers wanted!" email. Matthias went on to join Trolltech in Oslo, and was the equivalent of CTO or Chief Architect of Qt until Lars took over during the Nokia days.

Find Out More About KDE

Many of those who currently contribute to KDE are also professional Qt users, often at key customers of The Qt Company. As an example, Eike Hein is Treasurer on the KDE board, and is Chief Architect in Daimler's Mbition team, which at Akademy included Kai Uwe Broulik and Victoria Fierce. 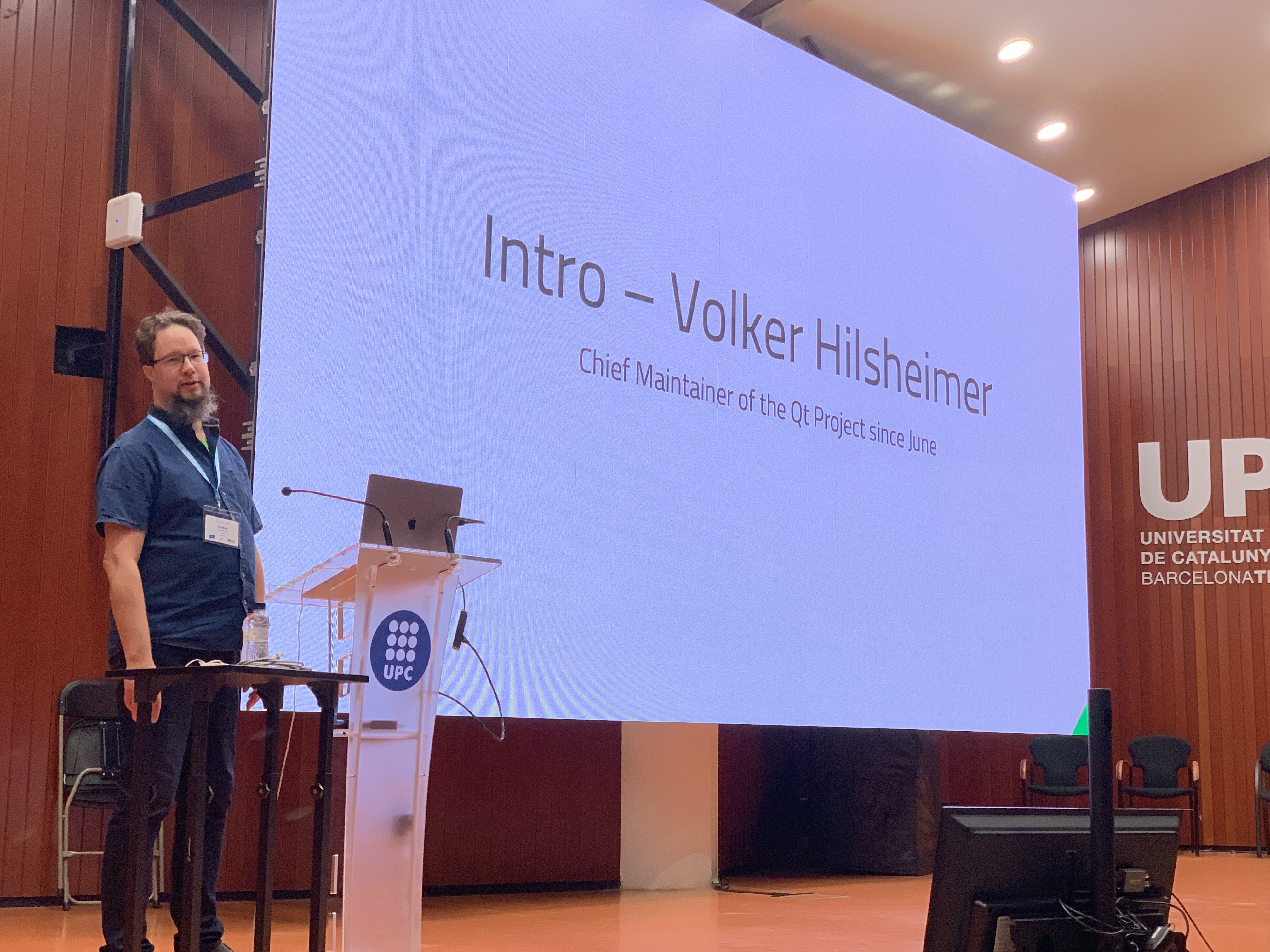 Our Keynote, "Building the future of Qt - together",  delivered by Volker and I, was well received, and we were glad to have people coming to talk to us afterwards. Our Catalan weekend continued with a number of interesting talks and presentations, and with fun socialising in Barcelona.
Meanwhile, Shyam delved into his specialty and held a Talk on "How C++ and Python can thrive together".
On the following day, we scheduled a BoF Session as a follow-up to our Keynote.

BoF Session: Follow-up on the Keynote - "Building Qt Together"

We had the room full lot of people in the room, so we asked what they specifically want to talk about. That produced a mix of topics, so we focused on two topics that seemed relevant for most: LTS, and Qt quality/stability:

We agreed that with Qt 6, the setup with commercial-only LTS branches as it is today is not a big problem, as the steady stream of feature releases is usable by Open Source projects without any porting effort. Bug-fixing patches from upstream branches usually apply cleanly as well, so the KDE folks see no need to maintain a patch collection. We also discussed about our commitment to maintaining and strengthening our Community, as well as the fact that The Qt Company having good business means we are able to continue to develop and support Qt as independent technology, which is good for everyone.

Analysing, debugging, and fixing bugs is a great way to get familiar with any large and complex code base. There are plenty of bugs in Qt's bug tracker, and we talked about how the Qt Company prioritises fixing bugs that impact customers during regular "bug fixing weeks". In those weeks, almost all of Qt R&D puts feature development on hold and focuses exclusively on fixing bugs and generally cleaning up the bug tracker in JIRA.

We discussed different ideas on how we could make it easier for anyway to work on the bug backlog, and perhaps to participate in such "bug fixing weeks" as an open event. For instance, labelling certain JIRA tickets as "easy for new-comers", and making it easier to get in touch with experienced contributors to  discuss certain issues and fixing approaches.

The reception was friendly, people were very happy that Volker and I were there, joined also by Allan as a long-standing KDE contributor, and Shyamnath who held a talk about C++ and Python. In hindsight, we should have more people at Akademy, later in the week there was less talking and more coding, and following up on some of the discussions directly then and there, with the right people from our side in the room, would have been very efficient.

There is a lot of interest in having physical Qt events again. Partners wanted to know when Qt World Summit is a real event again, and many contributors are looking forward to an in-person Qt Contributor Summit.
(Btw, our QtCS2022 recordings are up on Youtube.)

The hybrid setup worked well for the talks over the weekend, where the room support person also had the responsibility to represent online participants and make sure that their questions and comments were heard.

"And last but not least - Barcelona in early October gets a 👍 from me!" - Volker

Next year's Akademy will be in Thessaloniki; the dates are not yet set, but it might get hot!
See you in Greece, KDE folks!