We as Product Managers always have had three dimensions to play with when steering a software development project: Scope, Time, and Quality. The number of developers is most of the time fixed for multiple reasons. The amount of quality issues customers are willing to tolerate is limited.

That leaves us typically with two dimensions to manage the expectations of management and customers: Scope and Time. But there is another way to increase R&D velocity without cutting down the Minimum Viable Product to a bare minimum.

How to speed up the velocity of your R&D?

You might be wondering if you already squeezed everything out of your product creation workflow. I might have a suggestion for you if you are looking beyond agile methodologies, automated unit testing, and continuous deployment to optimize R&D efficiency:

Switch to an Integrated Software Development Platform which breaks up organizational silos.

Switch your UI framework to a Cross-Platform framework that brings Designers, Technical Artists, Software Developers, and Testers together as one team. Bringing these people together as one team working on one codebase removes waste in every single development iteration and improves, therefore, your time to market.

Let me give you an example.

In my previous job, I used to be the Product Manager of a B2B cloud solution. Every time we added a major feature, the UI Designers – having interpreted my ugly hand-drawn sketch of what customers wanted – came up first with a wireframe and then in another iteration with the visual design. Once a handful of strategic customers gave their input to the first visual design, the UI Designer reiterated the design and then gave their work product to the software developer. The work product of the UI Designer was a PDF file or a PNG image. The Front-End Developer had to start from scratch to implement a functional UI.

Once the Front-End Developer had built the first functional UI, it did resemble somehow the visual design of the UI Designer, but it was still rather rough because “the CSS styling can be done towards the end” I was told more than once. With the functional UI, we went then back to the customers and asked for their feedback which led to another iteration of UI design and UI implementation, both with zero synergies.

A lot of waste was produced because the Front-End Developer did have to start always from zero code to create the new version of the UI. With every iteration, the UI Designer created “impressions” of the visual design but nothing tangible, at least from the point of view of the Front-End or UI Developer. Designers and Developers worked in their own silos and I as a Product Manager tried to “glue” things together. Not to mention that the UI Designer was a freelancer and with every iteration she created more billable hours for herself, but that is another story…

I wish there would have been a better way to work. I know now that there is, at least when one builds the application with C++ or Python (I was working with Angular in the front-end and Java in the back-end).

How Qt removes barriers between Visual Designers and Front-End Developers?

An Integrated Software Development Platform like Qt removes the barriers between Visual Designers and Front-End or UI Developers. While UI Designers can stick to their preferred UI Design tool such as Figma or Adobe XD, Integrated Software Development Platforms allow Front-End Developers to import the UI designs and create automatically working code.

Tools like the Qt Design Studio allow Front-end Developers to import UI assets and compose a functional User Interface. Instead of starting from no code, Qt Design Studio creates usable assets during the import and even readable software code.

The functional UI code can then be immediately modified in the Qt Design Studio itself, always with a visual editor and a live preview of what the UI will look like. And breaking up silos doesn’t stop here. Back-end developers can take the code created from the Qt Design Studio directly into the Qt Creator, an Integrated Development Environment (IDE), and build the application logic. Everybody is working on the same code. Every iteration - after getting feedback from customers - gets done faster. Improving the time to market but also customer-centricity. 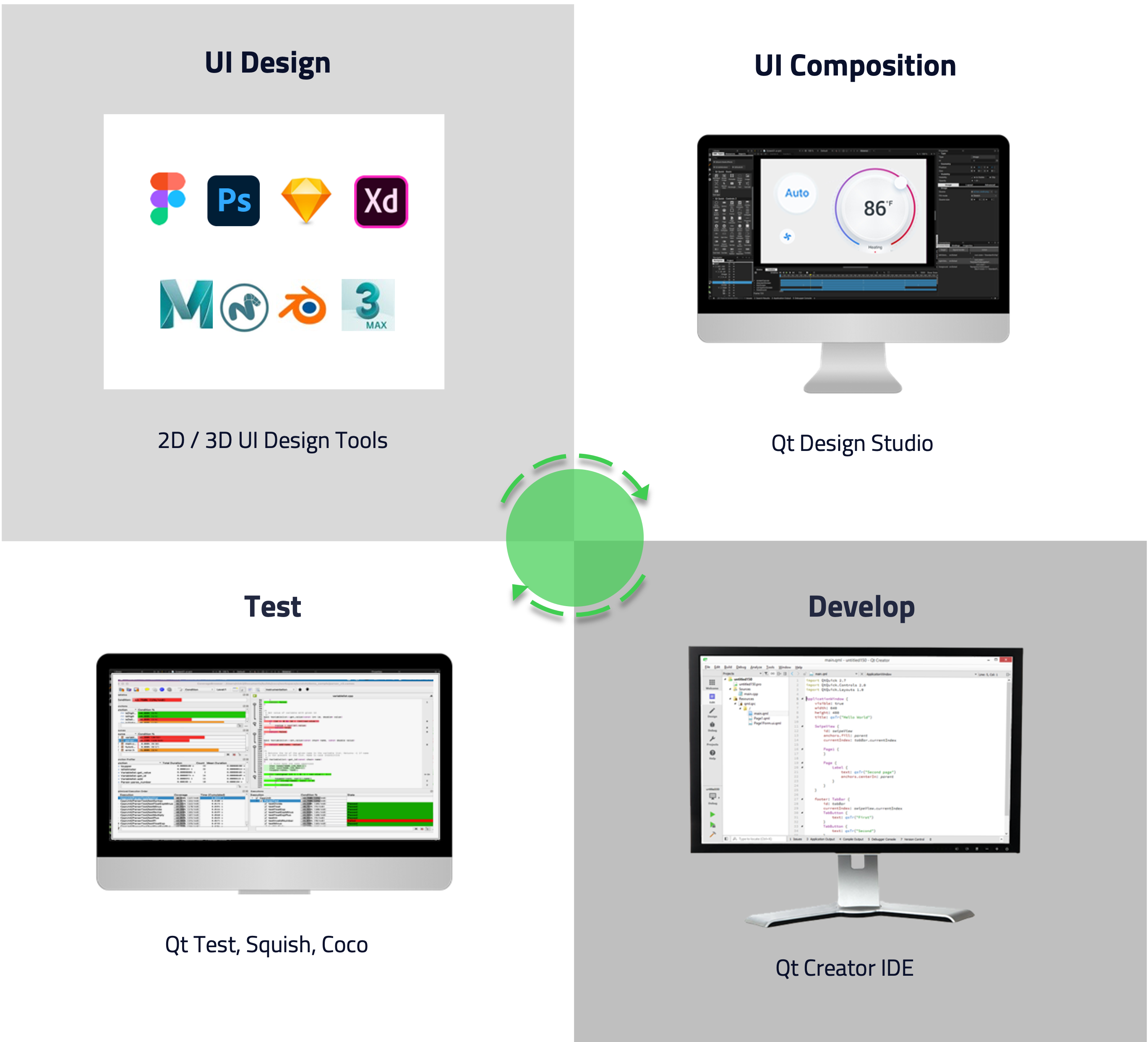 Product creation productivity is not only positively impacted by making UI Designers and UI Developers as well as UI Developers and Back-End Developers work closer together. Readily available software components for the UI and the application logic accelerate the creation of the first prototype. Ready reference build images for different operating systems speed up the build process. Automating functional UI testing removes delays in every development iteration. But describing all these benefits in detail goes beyond the scope of this blog post.

Using an integrated toolchain speeds up your product creation. But don’t take my word for it. Working for Qt, I am biased. Rather consider the words of our customers.

“If I was to create a complex UI in C++ and OpenGL it would take me a week, I can produce the same thing in a few hours without much or any performance loss.” You can check out more about Vochlea’s lightning-fast application here.

How can Qt accelerate your application development? Contact us to set up a call and discuss more.