Creating an effect with QQEM

Todays blog post gives a bit more information about how to effectively use the Qt Quick Effect Maker (see the QQEM introduction blog post). We will first create an example effect using several Qt Graphical Effects and then re-create this same effect using a single QQEM multi-effect. This will be done with the node editor, so no experience of writing a shader code is required.

It is Monday morning. You are early in work as usual, drinking your morning coffee and checking tasks when email from The Designer arrives. 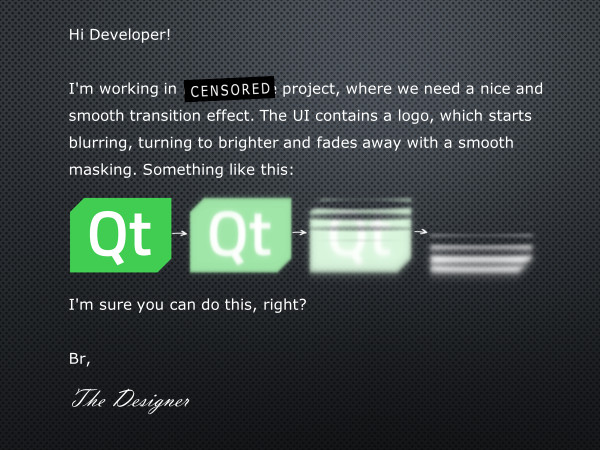 Seems easy to do with Qt Quick. You take a sip of coffee, roll up the sleeves and start coding. Luckily Qt Quick contains Graphical Effects which can be used for this. After coding a while, you end up with a functional effect and a tester application which looks like this:

The relevant source code for the effect is:

So basically, you combine 3 graphical effects after each other: FastBlur, BrightnessContrast and ThresholdMask with a custom masking image. Being satisfied with this, you provide the effect and a small tester application to The Designer with a note "Did you mean something like this?" and continue being awesome for the rest of the day.

Next morning, a new email arrives. This time from The Project Manager. 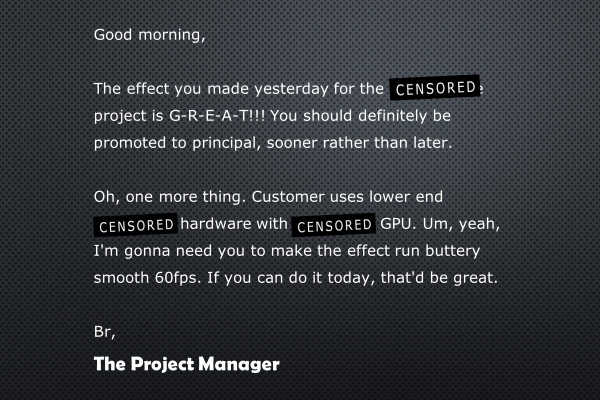 OK, so nobody had mentioned to you that the customer runs this on an embedded device. And the effect you made yesterday was anyway just an initial version to get feedback. But that's OK. You know exactly what to do next: Implement the same effect as a single multieffect using the new Qt Quick Effect Maker.

Here's a video showing how to create the above effect with the Qt Quick Effect Maker using just nodes and properties.

As you can see, creating, testing, and exporting the effect with QQEM took only about 3 minutes. The source code to use the exported effect component in your application looks like this:

So instead of 3 separate effect components there is only one, with properties to control blur, brightness and masking.

Now let's test the performance of the original Graphical Effects version vs. custom QQEM multi-effect. Testing is done on a beefy Samsung Galaxy Tab S8 with Adreno 730 GPU, increasing the amount of effect items animating on screen and measuring how that affects the framerate. Note that Tab S8 has higher frequency 120Hz screen. 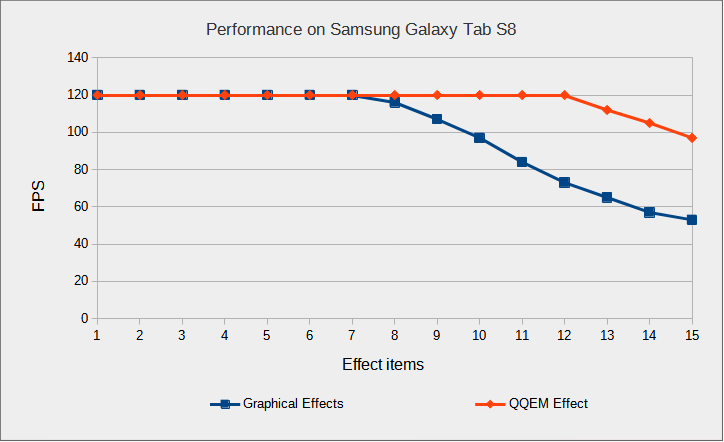 What we can see is that the initial effect using multiple Qt Graphical Effects maintains 120fps up to 7 effect items, while the QQEM multi-effect reaches solid 120fps still with 12 effect items: Combining effects into a single shader effect brings a notable performance gain.

You provide this custom effect to The Project Manager, it runs at solid 60fps on the customer target hardware and everyone is happy.

Let's conclude why you may want to create custom effects using QQEM:


The source codes of the example application with both versions of the effect are available in here. Convinced? See the instructions from the end of QQEM Introduction blog post and start making your own custom effects!