While Qt 5.15 LTS release is just out, we have also been working for some time now towards the next major version of Qt. Today, we are releasing a snapshot of Qt 6.0 for the first time. While we are still very early in the release process, and far from having the feature freeze, the first snapshot is offering binaries for a limited set of platforms and focused on the essential Qt modules. Given that we are approximately six months from the planned release date for Qt 6.0, we cannot guarantee all parts of the pre-release snapshot will work as intended.

In the first snapshot, we are providing binaries for desktop platforms only. The mobile platforms and embedded Linux are being worked on; therefore, to test those you need to build from source. Qt 6.0 requires C++17 support from the compiler and we are in general focusing on fairly recently released compilers. If you want to use an older compiler, Qt 5.15 is the way to go.

While we are missing the full content and many feature updates, providing snapshots as early as possible offers multiple benefits. First, it guarantees that the release process and infrastructure is functional. More importantly, it eases testing and evaluating the current state by you, the developers. There are still rough edges when building Qt 6 manually, having pre-built packages to verify a project against is beneficial.

To cater to the early adopters and those interested in giving feedback to development of Qt, we will continue to provide regular pre-release snapshots of Qt 6.0 – like the one released today. These will be available in the online installer under the “Preview” package category. Typically, no separate announcements are made, as these are intended to be available around every two weeks after the feature freeze (and less frequently before that).

Pre-release snapshots are found in the Preview package category of the Qt installer: 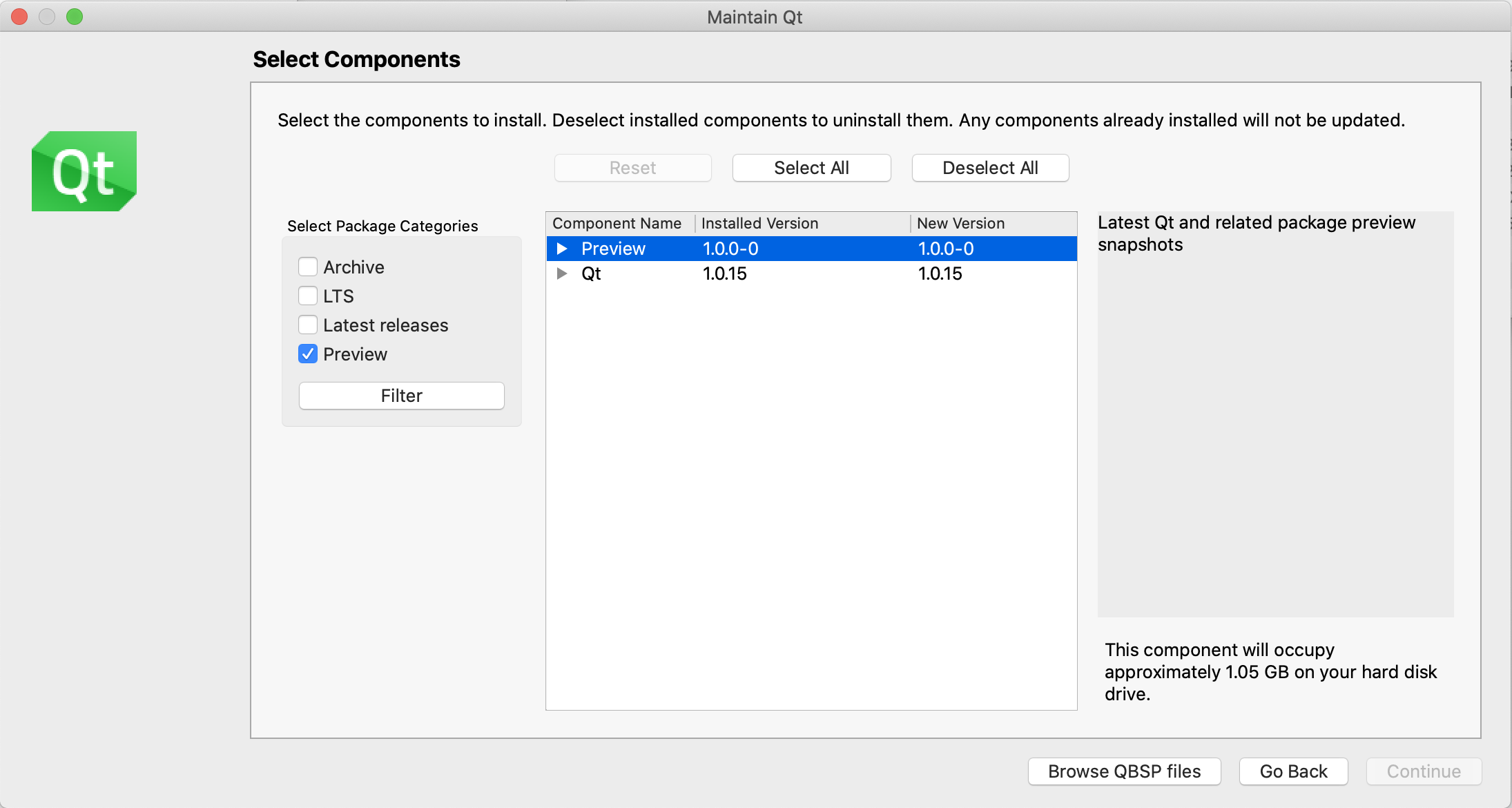 We are working towards releasing Qt 6.0 in December, with multiple important milestones along the way. By end of June, we are aiming to have the larger structural changes completed (such as the switch to a new build system, and the new graphics architecture).  Also, the target platforms will be set up in the CI system. More interesting milestone from a user viewpoint is coming in the beginning of October when we aim to have the first Beta release available.

Currently, the Qt 6.0 development timeline is planned to be the following:

These planned target dates may change along the way. If there are changes made to the plan, we’ll update those in the Qt Wiki at https://wiki.qt.io/Qt_6.0_Release.

If you are interested in following Qt development more closely, or would like to consider contributing to Qt, please subscribe to the Qt Project Development mailing list at https://lists.qt-project.org. We are always happy to see new contributors. If you feel up to it, please check https://www.qt.io/contribute-to-qt to get started. Contributing code is just one of the multiple ways you can help shape up the next major version of Qt. Providing feedback and helping others are both very beneficial and highly appreciated.

Update 25th June: We have the second snapshot out. It also contains examples. Unfortunately it is quite broken for macOS due to https://bugreports.qt.io/browse/QTBUG-85240. Fix is expected in the next snapshot.