I'm super excited to finally talk about the project I have been working with during the past months: Qt Quick Effect Maker (QQEM). This blog post is an introduction into this new tool and more related posts are coming in the near future. So what is it? QQEM is a custom-made tool designed for a single purpose:

As a picture is worth a thousand words and video is worth a lot more, here's a short introduction video:

Qt Quick Effect Maker is a hybrid editor, offering both a node editor and a code editor. This was the approach we selected early on as we wanted a tool that is both productive and easy to use, but also allows freely writing and tweaking the shader code. There are many "shader graph" node editors which allow making effects with just nodes. The no-code approach of these tools can be tempting as they allow doing complex effects without writing any shader code. But there are also drawbacks, like not being able to freely adjust and optimize the shaders and needing to learn the set of nodes which create the visual programming language. This can result into 80-20 rule, where the first 80% is easy but the last 20% seem impossible to achieve. For these reasons we proceeded with the hybrid approach and a simplified node editor. QQEM nodes are individual effect components, which are linked one after another, so they only have a single in and out connections. The shader source code of all the nodes, both custom nodes and built-in nodes, can be freely modified. The nodes are then combined, and Qt shader tools generates optimized binary shaders for all the RHI backends (OpenGL, Vulkan, Metal, Direct3D). 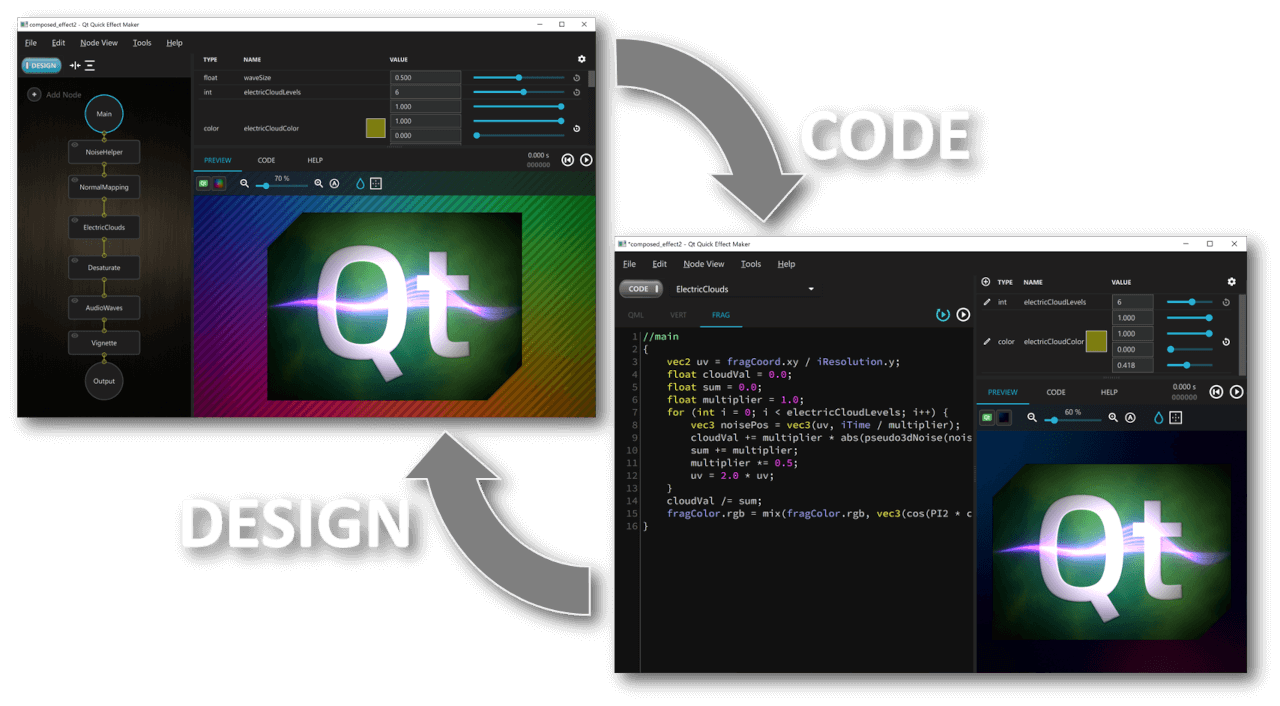 The main target users for QQEM are developers and technical artists who understand some GLSL code. But even if you don't, it can still be used to combine built-in effect nodes and modifying their properties. Switching between DESIGN (nodes editor) mode and CODE (source editor) mode while developing the effects is highly encouraged, no matter if you are more of a developer or a designer.

Here is a summary of the most notable QQEM features:

There would be a much more to talk about, but let's keep this blog post brief and to the point.

Current Status and What's Next?

QQEM requires Qt 6.4 (or the dev branch) so install that first. Then you can build the latest QQEM directly from the source repository. This is still very much work in progress and there are no prebuilt binaries yet available, but we wanted to release QQEM source codes available now to start getting more users and feedback. So far we have used it internally in some customer projects and example projects, and the response has been very positive.

Another thing we are currently working on is Qt Design Studio integration for the QQEM. This will allow opening QQEM projects directly from QDS, modify them in QQEM and get the exported components back into QDS project. This should be available in QDS builds by the end of the year.

So please give QQEM a go and feel free to make tickets (component: "Quick: Effect Maker") of all the found issues and feature requests. More blog posts to come later, so stay tuned!

Creating an effect with QQEM