Thursday May 06, 2021 by Christian Kandeler | Comments

As announced earlier, we have released Qt Creator 4.15 this week. Let us now take a closer look at some of the improvements to our C++ support that this version brings.

Since Qt Creator 4.14, the results of the "Find References to Symbol" action are colored differently depending on whether the respective reference is a read or a write access, or something else. Now it is also possible to filter the results according to the access type. 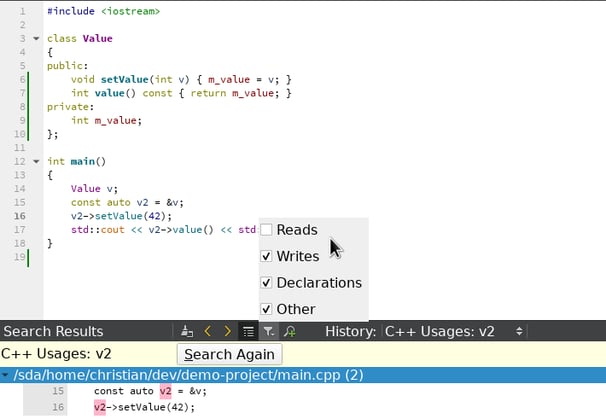 As you might know, we employ libclang for document-level features such as highlighting and completion, while the global view of a project is still provided by our trusty old built-in code model. We are currently experimenting with using clangd for this job. With a Qt Creator built from our master branch, you can already enable clangd support in the C++ code model settings, which currently means that the results of "Find References" will be provided via clangd. This functionality is still quite rough around the edges, but if you have problems with global symbol search in your projects, it might already be worth checking out.