Qt for MCUs 1.2 is now available for download in the Qt installer.

A bit more than a month has passed since the release of Qt for MCUs 1.1 and it's already time for a fresh batch of new features, ready to be flashed on your microcontroller. Starting from 1.2, we will be releasing smaller but more frequent feature updates so that your GUI framework keeps getting more powerful (but stays tiny).

Qt Quick Ultralite is designed to be a subset of the complete Qt Quick framework, its QML APIs aim to be directly compatible with its larger sibling even though the implementation is entirely different. Some key differences did however exist in Qt for MCUs 1.0 and 1.1. This release addresses the main ones, making it much easier to reuse QML code across all the platforms that Qt supports, from microcontrollers to mobile devices, to Desktop. If you are an experienced QML developer, that also means being able to jump into a Qt for MCUs project with minimal adaptation.

The main differences addressed are the removal of "#pragma main" and Qul.image(), and the ability to use relative paths for the source property of Images instead of always having to use the "qrc:" URI scheme.

We are also bringing some of the new QML features introduced in Qt 5.15: required properties for delegates and inline components. You can read more about these features in this previous blog post.

The complete list of changes and fixed bugs can be found here.

Last but not least, we have shaved some bytes off the Qt Quick Ultralite engine and it is now lighter than ever. You can find below a chart comparing the RAM footprint between Qt for MCUs 1.1 and 1.2 for three of our demos on STM32F769i-discovery. Note that these numbers only include the footprint of the Qt runtime but not of the assets, such as images and fonts. 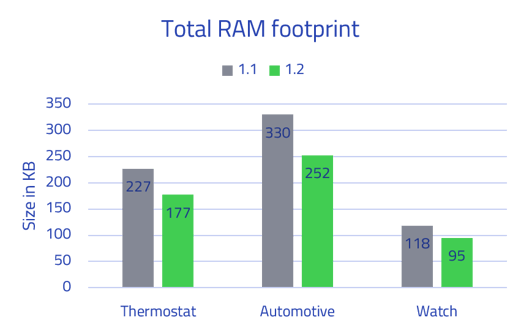 That is on average a reduction of ~22% in RAM consumption.

How to get it

As usual, use the Qt installer or the maintenance tool to download the latest version of Qt for MCUs.  If you do not already have a license, you can request a free evaluation here.

Note that for convenience, you can now download a compatible version of the GNU ARM GCC compiler straight from the Qt installer.

If you are using Qt Creator, make sure to update it to the latest version (4.12.2) which was also released today. It contains fixes to correctly handle some changes in Qt for MCUs 1.2.

If all you are interested in is trying a demo on your board, you can find ready-to-be-flashed images in the following pages: NXP, ST, and Renesas.

To help you get in-depth knowledge about Qt for MCUs, we will start offering online training from the end of June. Sign up for in-depth training on June 24, 2020. The sessions, which will span over half a day and will be given by Qt for MCUs experts, will give you a head start in developing your own Qt application for microcontrollers. Stay tuned for more information.