QQuickWidget is a QWidget subclass, originally introduced in Qt 5.3. It is the bridge between traditional widgets and the world of QML and Qt Quick. In this post we are going to take a look at its evolution and the latest improvements in the upcoming Qt 6.4 release, because there are some quite significant changes happening under the hood.

The contents of a widget-based window and a window showing a Qt Quick scene are rendered in a quite different way: the latter relies on 3D graphics APIs (*), such as OpenGL, Vulkan, Metal, or Direct 3D, whereas a widget-based user interface is rendered using QPainter and then blitted to the native window by windowing system specific means, for example, either BitBlt or UpdateLayeredWindowIndirect in the case of Windows. A QQuickWindow, or its convenience subclass QQuickView, are not directly usable in the QWidget hierarchy of a top-level widget window. (after all, QQuickWindow itself is a true QWindow, nothing to do with the world of QWidgets)

(*) For completeness it needs to be mentioned that Qt Quick does have a feature-limited software backend that renders what it can from the scene graph using QPainter, but that alone does not make it usable within a QWidget hierarchy.

How does one combine the two worlds then?

And why would one want to do so?

A good example is one of Qt's tools: Qt Design Studio. While it may at first appear to be an application created fully with the traditional widgets, it is in fact a combination of widgets of Qt Quick, using the best suited technology for each of its views and panels.

This Qt Creator window with the Design view open for a Qt Quick 3D example is in fact composed of four Qt Quick scenes and a single widget hierarchy, with the top-level window being a QWidget. For example, the properties panel on the right, the component grid on the left, or the state view on the bottom are all implemented with QML and Qt Quick.

Before QQuickWidget, the solution to add Qt Quick content into a QWidget-based user interface was to use QWidget::createWindowContainer(), which is still a valid option today in some cases, but it comes with some potential limitations since there is no magic here: the QQuickWindow continues to be a proper native window in this case, Qt relies on the windowing system to ensure the window with Qt Quick content is positioned appropriately by making it a child window.

This is demonstrated by the embeddedinwidgets example that comes with Qt. From the windowing system's perspective this is not one but two windows. For simple cases, such as here, where we effectively just want the "foreign" Qt Quick content to occupy a rectangular area in the middle of our user interface, not having to worry about stacking, clipping, resizing, reparenting, or more complicated widgetish behavior, this works well. 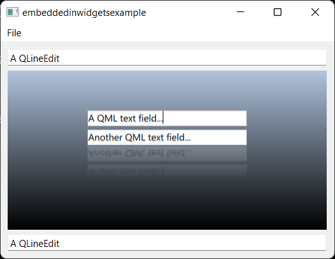 The story changed slightly with Qt 5.3. That release introduced QQuickWidget, backed by a fairly sizable and somewhat complex infrastructure internally. The complications stem from the fact that while a QQuickWidget (or a QOpenGLWidget, for that matter, which is built on the same infrastructure) is a true QWidget on the surface, the underlying rendering system (Qt Quick) knows nothing about widgets, backing stores, and such, and wants to produce frames using OpenGL, targeting a WGL/GLX/EGL/etc. surface. What happens under the hood is that the presence of such special, texture-based widgets trigger switching the corresponding top-level window over to being OpenGL-based, with a mini-compositor drawing quads textured with the content from the QQuick/OpenGLWidget children within that top-level combined with the QPainter-rendered widgets (i.e. the rest of the top-level window content) which now needs to be uploaded into a texture as well.

The full solution consists of the following components:

In practice things are a bit more convoluted, for example QQuickWidget has to have support for the software backend of Qt Quick as well, which then requires it to be able to operate also like a traditional widget (with regards to paint events and alike), but let's set these complications aside for now and focus on the OpenGL side of things.

The QQuickWidget API is modeled after QQuickView. This makes it fairly intuitive, one can for instance do something like this: 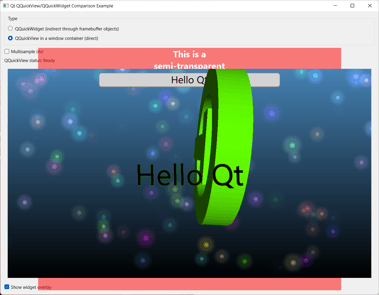 For the 6.0 release Qt Quick and Qt Quick 3D got ported to use the new 3D API abstraction layer (QRhi), instead of working directly with OpenGL. This now means that launching a Qt Quick application on Windows renders using Direct 3D 11, whereas compiling and running the same application on macOS renders with Metal, unless the application explicitly requests using some other 3D API.

This left QQuickWidget and the supporting infrastructure out in the cold to a large degree. With the backing infrastructure being stuck with OpenGL and OpenGL texture objects, in Qt 6.0 and the first few releases afterwards QQuickWidget was only usable if the application's requested graphics API was OpenGL. Thus developers had two choices:

(**) For the curious, this being a static function is mandated by certain legacy from Qt 5.0 and even pre-5.0 times, and while not entirely ideal, it is not likely to change in the near future. It is not ideal that the API to use can only be specified on a global level, affecting all QQuickWindow/View/Widgets created afterwards, without the ability to switch to something else later on, but as parts of the backing internal infrastructure are either application global (render loops) or thread local at best (animation driver), switching over to finer granularity for these things is not entirely trivial. It is recognized however that this will need to change at some point, to allow control on a per-window basis.

Comparing the documentation for 6.3 and 6.4 reveals that QQuickWidget finally drops the OpenGL requirement.

Therefore, applications using QQuickWidget no longer have to do something like QQuickWindow::setGraphicsApi(QSGRendererInterface::OpenGL); in their main(). (unless of course if they themselves do rendering directly with OpenGL)

The rules for choosing the 3D API match QQuickWindow and QQuickView. If the platform default is not deemed suitable, the application can still call setGraphicsApi() or set the appropriate environment variables.

This puts three Qt Quick scenes, some with some true 3D content, into a QTabWidget. This is not very special on its own. What makes this test application more interesting is that it interactively asks for the 3D graphics API to use on startup and then calls QQuickWindow::setGraphicsApi() with the selection. This sort of user-controlled API selection is not something most real world application should do, but is useful for demonstration purposes. 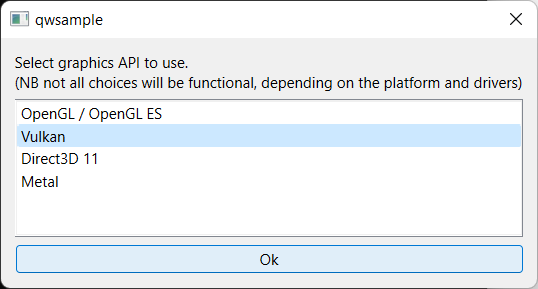 The Qt Quick scenes show the active API queried via GraphicsInfo in the top right corner. Additionally, one could launch with the environment variable QSG_INFO=1 to verify what is happening. Or take a frame capture with a tool like RenderDoc.

Some notes on the implementation as of Qt 6.4

For applications that employ multiple QQuickWidget instances, or perhaps a QOpenGLWidget or two within one top-level widget window, there is one important limit to keep in mind: all the widgets within the same window must use the same rendering API.

This is relevant in particular when one is using QOpenGLWidget: putting a QOpenGLWidget into a window mandates that any QQuickWidget in the same window is also rendering using OpenGL. When there is disagreement between the widgets, bad things will happen. (in less bombastic terms, the widget(s) losing the fight will not render their content)

In general, QOpenGLWidget is expected to function like before, and there are no changes in the public API. Even though internally certain things function quite differently than before, from the applications' perspective there should be no visible changes.

To make all this possible, the backing infrastructure had to undergo a number of changes:

It should be noted that in the uncommon case of an application wanting to use QQuickWidget in combination with the software (QPainter-based) rendering path of Qt Quick, this is fully supported still.

All this means that applications such as Qt Design Studio can now function using each platform's default, best-supported rendering API, even when QQuickWidget is in use. Using a custom build of Qt Creator and the designer components against a build of Qt with some of the upcoming 6.4 work integrated, we can see all this in action also in a real world application as well.

Taking RenderDoc capture on Windows gives us the following frame capture, showing the mini-compositor in action. The main window is now apparently rendering using Direct 3D 11, and the presence of 4 QQuickWidgets triggers the following steps in the main render pass:

(note the highlighted command in the left panel; the texture sampled in the last draw call is the traditional QPainter-rendered widget content) 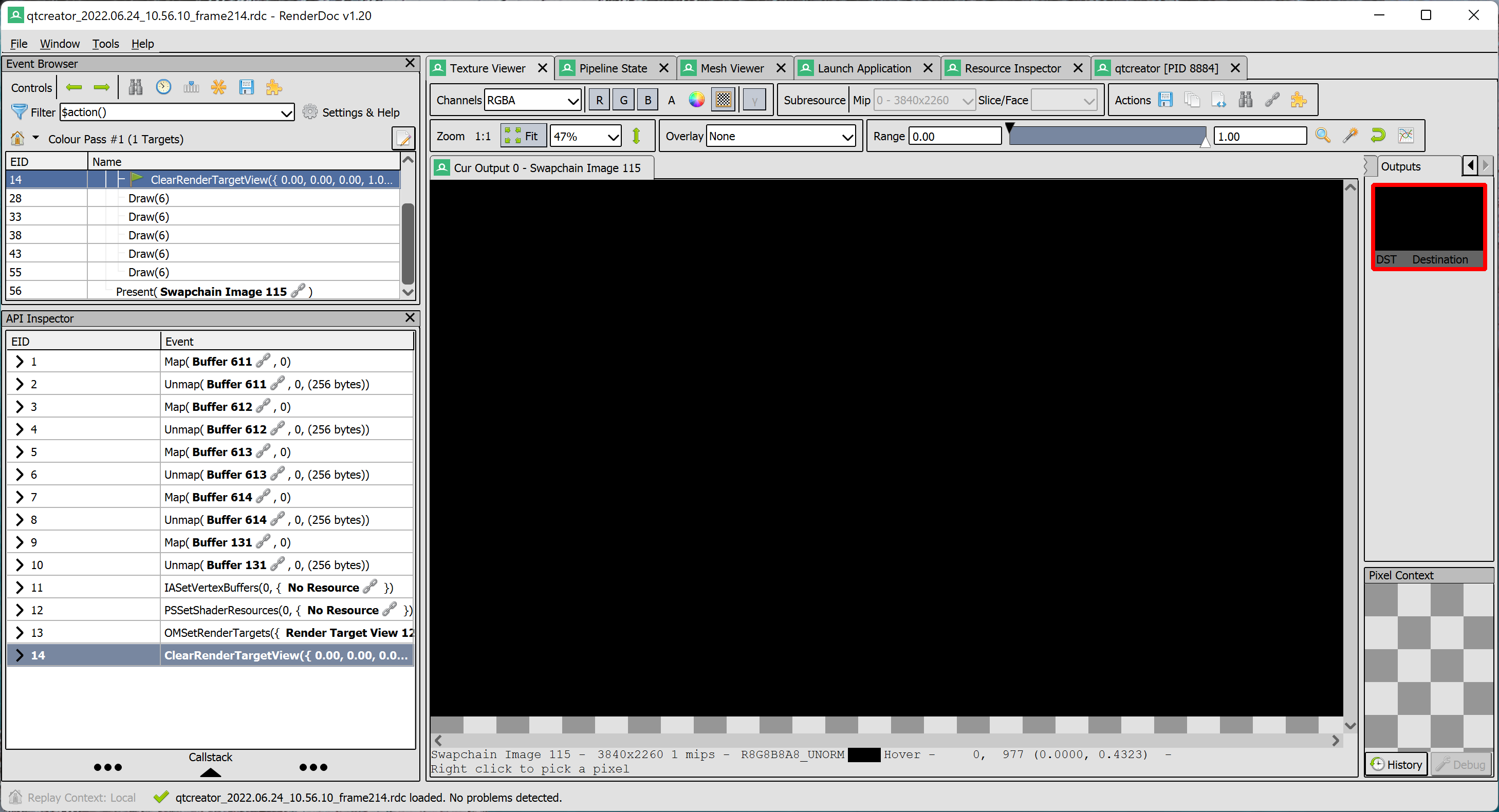 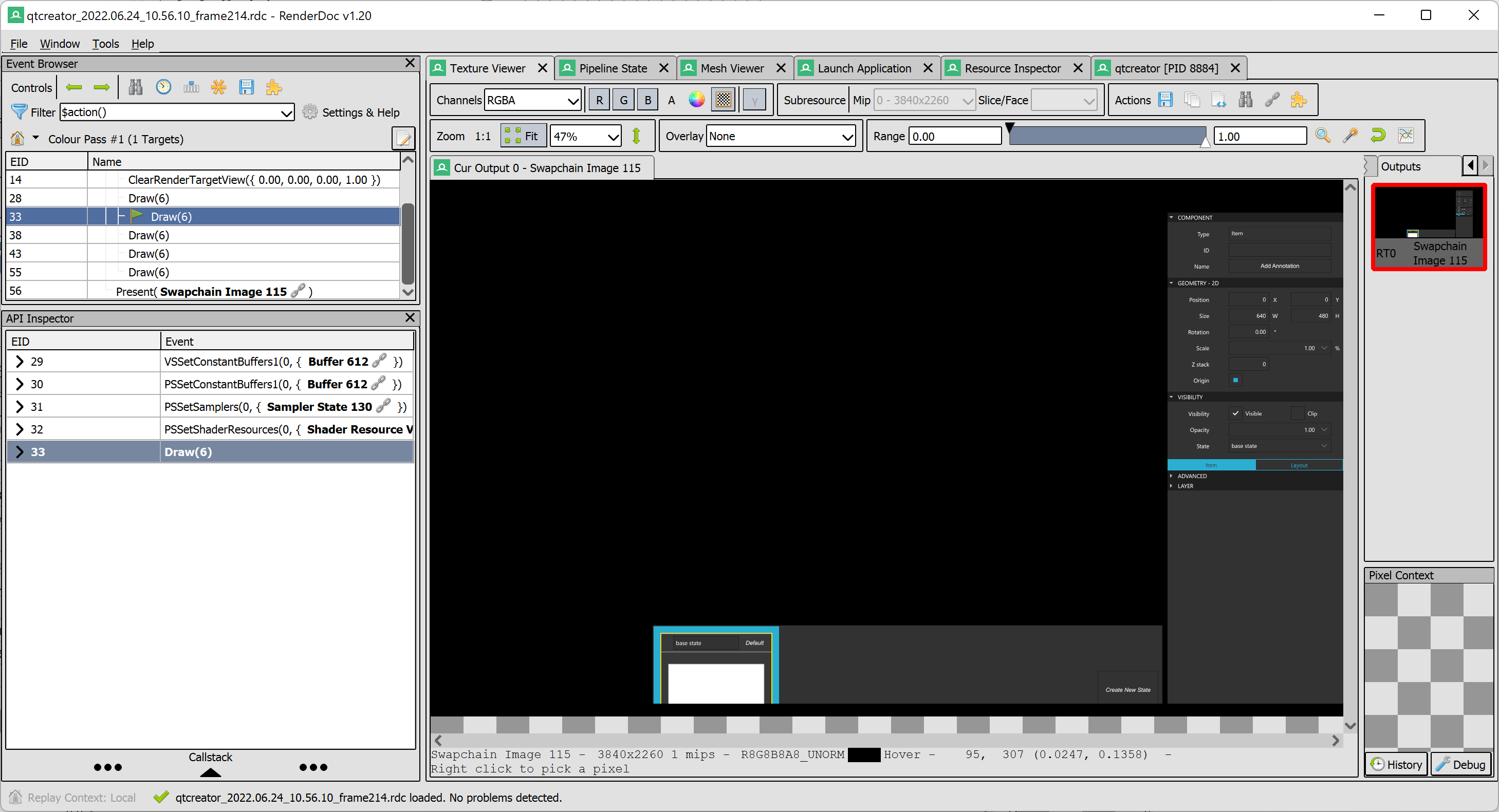 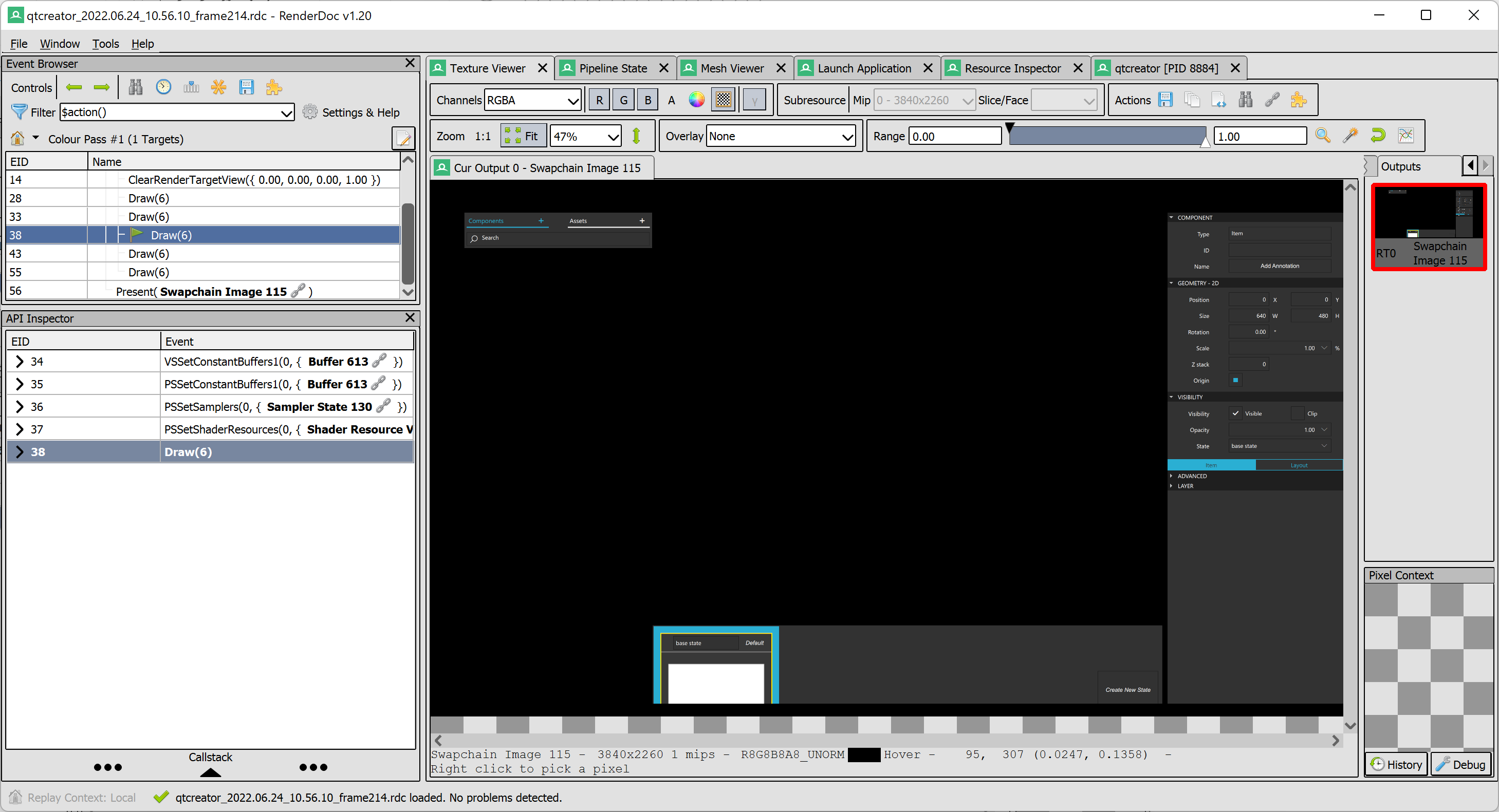 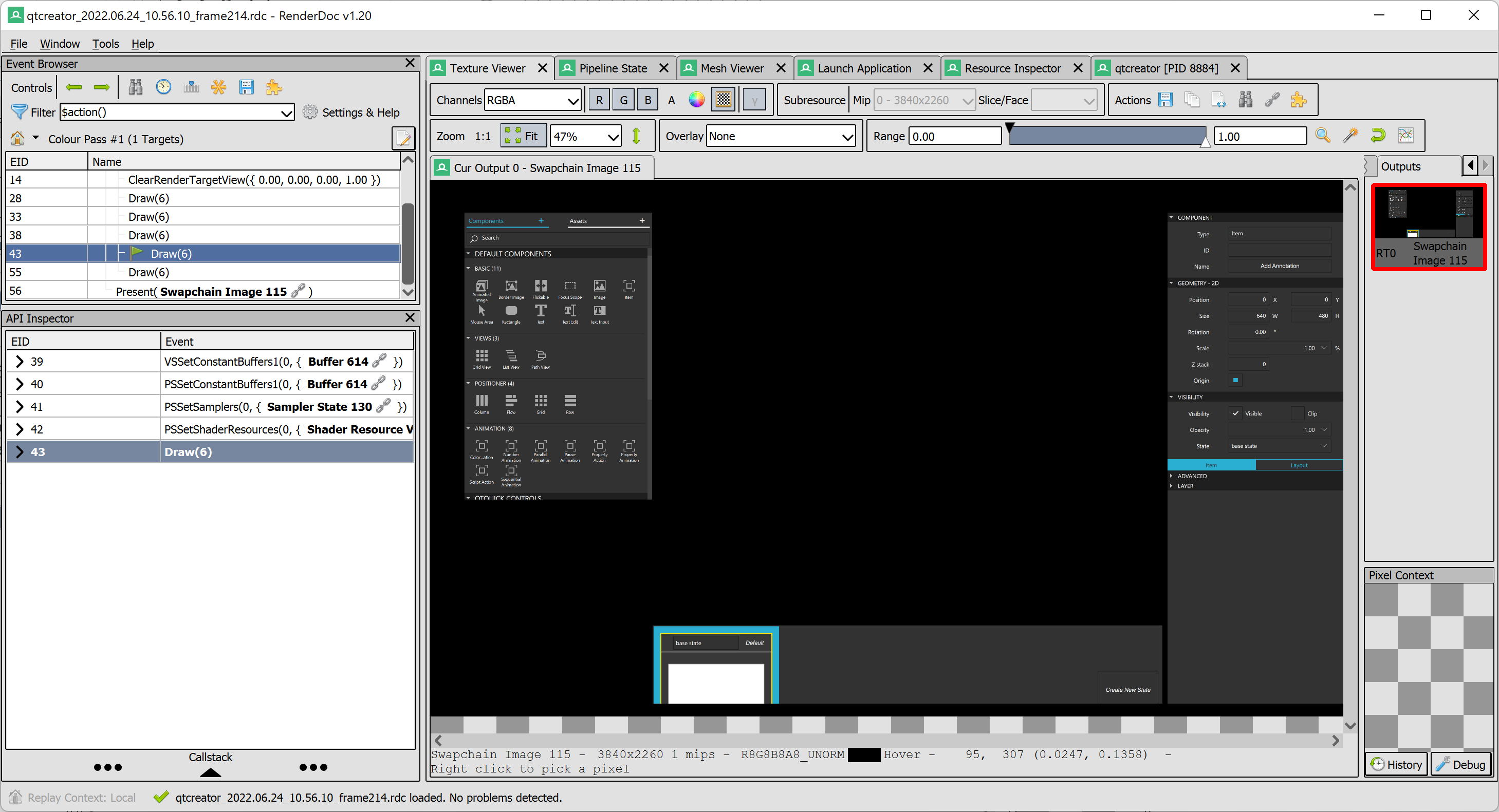 And there we have it, the expected final image in the window, no longer forced to use OpenGL. This can be particularly important on platforms where OpenGL is not desired (e.g. because it has been deprecated), meaning the 2D and 3D design views can now work with the platform's primary graphics API. In addition, not being tied to OpenGL may become useful later on, for example in case Qt Quick 3D takes on features that work best with more modern graphics APIs, because using the same underlying rendering in both the design views and at run time is certainly a better choice then.