The Curious Case of the Responsible Process 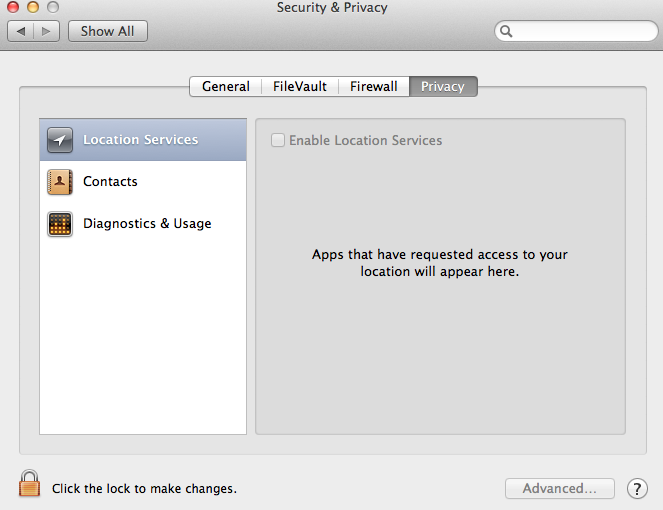 The feature allowed granular access control to features such as contacts or location, and would ask the user to confirm attempts by the application to access them before granting access.

Most of you probably got to know this part of the OS when macOS Mojave (10.14) and Catalina (10.15) greatly expanded the number of privacy settings, resulting in a few rounds of whack-a-mole after upgrading.

If using the System Preferences UI is not your cup of tea you can use the tccutil binary to manage the permissions, limited to revoking them, either wholesale or per application bundle ID:

To peek behind the curtains one can observe the stream of log messages produced by the com.apple.TCC subsystem:

Unfortunately there's no uniform API to interact with the TCC subsystem, to request or manage permissions, so as a simple test-case let's try to access the files for the user's calendars:

With the corresponding CMakeLists.txt file:

Building and then running this application from Finder should pop up the following dialog: 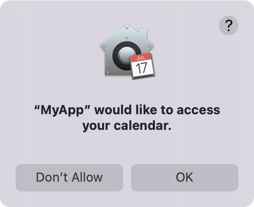 And after choosing any of the options the result will be visible in the System Preferences:

We can reset the choice to make another attempt, by issuing:

Now, you might be tempted to launch the application from the terminal, to see the printf output:

If you do, you'll end up with this dialog instead: 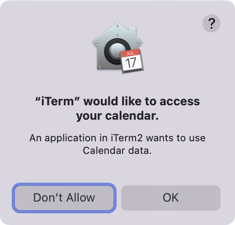 What just happened? Why is iTerm now requesting access?

As it turns out, permissions are inherited by child processes. And when a process is about to access some protected resource, the TCC subsystem figure's out which process is the responsible one, and uses that as basis for requesting and persisting the result.

We can observe this by looking at the log stream, but an easier way is to consult launchctl:

In this case we've launched MyApp directly from within iTerm2, and hence TCC decides that iTerm2 is responsible for MyApp. Whereas if we opened MyApp from Finder or via open, TCC would attribute the calendar access to MyApp:

In the case of an application embedding and launching helper executables this behavior of course makes sense, but it can be a bit surprising in cases such as launching apps from the terminal.

The rabbit hole that started it all

What led me down this path was an observation that Qt Creator was gaining more and more permission-related usage descriptions in its own Info.plist file (a way that applications can give more context to users about why the given permissions are needed, which in some cases is a requirement to gain that permission). I was surprised by this, as I wasn't expecting Qt Creator to need access to my contacts, calendars, or photos.

This didn't sit right with me, so I started poking at how things worked in Xcode. It turned out that Xcode did not have this issue, nor did launching the application from within lldb:

Somehow lldb was circumventing the logic that was deciding which process was the responsible one.

Luckily LLDB is part of the open source LLVM project, so I was able to track it down to this change, with the magic formula:

By setting a special flag on the spawn-attributes before spawning, the resulting process would break free from its parent process and become responsible for its own permissions. A quick search for the function name showed that LLDB wasn't the only one using this trick.

A quick prototype later I had a tool that would let Qt Creator disclaim any responsibilities for the user applications it launches, allowing us to remove all of the permission usage-descriptions from Qt Creator:

This feature will be released in the upcoming Qt Creator 7 release. As noted in the change log it may result in some applications needing adjustments:

Let us know if this causes any unexpected issues.

Testing other IDEs, I was seeing similar issues as Qt Creator had, so this seems like a common issue for this use-case:

I'm still not sure how Xcode does things when running an application without debugging it (i.e. not going via LLDB). From looking at the process tree, the launched process is not a child of  LLDB's debugserver, like it is when debugging, but instead is a direct child of launchd. I can achieve the same with skipping the POSIX_SPAWN_SETEXEC flag, but I'm not sure if that's really what's going on.

One other option would be to use open to launch the application, as that parents it under launchd, but this only works for application bundles and not for standalone executables.

Introduction to the QML CMake API