The Future of Headless Embedded Devices

The trend of hybrid and headless embedded devices disrupts many industries. According to a recent market study commissioned by the Qt Company, the future product design of embedded devices is heavily polarized depending on the industry. In some industries, 85% of respondents imagine that embedded devices will not have in-built screens anymore within five years. In other sectors, only 10% of respondents expect devices with in-built screens to disappear even within ten years. This blog post gives an update on opportunities and threats for a shift towards remote-controlled devices in different industries.

For many years the trend for displays of embedded devices has been shifting toward more smartphone-like experiences on more powerful displays, lately also increasingly touch displays. If I look at my geothermal heat pump at home now, a Bosch Compress 7000i, then I must admit that its display feels more potent than the one of my first smartphone, a Nokia N70. 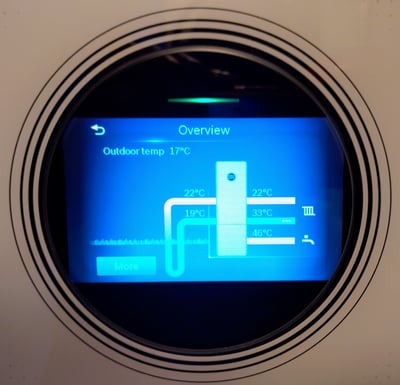 But the trend toward more advanced touch displays comes with challenges. Even if screens have become cheaper over time, the cost of displays contributes significantly to the bill of materials. Not to mention the component shortage embedded device manufacturers have been fighting since 2021.

In recent years, we at the Qt Company have seen an increasing demand for new use cases on how to monitor and control embedded devices in specific industries. Accordingly, we see a growing demand for technologies supporting so-called headless devices, i.e. devices which do not have an in-built display, but are controlled and/or monitored from remote displays such as tablets and smartphones. Already in 2018, we at Qt provided the first technology previews for supporting such remote UIs. But only in recent months, the trend for headless devices is materializing in more and more development projects.

Considering the home automation use case of my geothermal heat pump, considering that there are four laptops, three tablets, and four smartphones running in our household, I wonder whether such a fancy display is really required to check the statistics of the heat pump and initiate the vacation mode once a month. What technologies would we need to implement a heat pump without an in-built display? Let's look at what Qt got to offer…

Virtual Network Computing (VNC) is a client/server architecture allowing one computing device to control another over a protocol called Remote Frame Buffer (RFB). To implement such a setup, for example, for a Qt application, one needs a Qt VNC Server component running on the embedded device and a VNC Viewer application running on the remote UI device.

The main goal of WebAssembly (also abbreviated as WASM) is to enable high-performance applications on web pages. It can also be used to port native applications such as Qt / C++ applications to run on a standard smartphone, tablet, and desktop computer. Therefore, Qt for WebAssembly is an excellent solution for embedded device manufacturers that have already implemented a native Qt application and want to reuse the code for headless embedded devices. This technology is also a good choice for embedded device manufacturers who wish to maintain one code base for headless embedded devices and devices with an in-built display. WebAssembly can enables richer user experiences because tablets and mobile device are often more powerful and better displays than industrial devices constraint bill of material and other constraints.

Let’s examine what embedded device makers say about the future of headless devices. In the above mentioned study, many of the ongoing trends in the embedded industry were discovered. The analysis takes a deep dive into the following key sectors: industrial automation, home appliances, and medical devices, in particular, the In-Vitro Diagnostics device business.

The feedback of embedded device manufacturers and experts on the future of headless devices couldn't have been more polarized.

In the home automation industry, 85% of respondents agree that "within five years, fewer home applications will have built-in, but rather they will leverage the user's mobile device and/or connect to voice assistants."

In the industrial automation industry, the picture is more of a mixed bag: More than half of the respondents agreed that "within ten years, machines and field level devices will not have attached screens themselves, but rather they will connect to networked monitors or handheld devices. One of the industrial automation manufacturers summarized the upcoming trend of hybrid embedded devices nicely in one sentence: “I think there will still be attached screens, but definitely I think that remote screen would be automatically included as part of the product for remote access."

Finally, in the In-Vitro Diagnostics (IVD) device industry, the future of headless embedded devices is perceived somewhat differently. Only some 10% of respondents agree that “within 10 years, IVD devices designed for us by professionals in hospitals and healthcare facilities will not have screens built into the devices but rather they will connect to a mobile phone or tablet and be controlled via that device."

Furthermore, Mason Adair summarizes the IVD trend on headless devices as ”whether IVD devices will still have attached screens in a decade was a highly polarizing question and one that varied between devices for use by patients versus those used by practitioners. Its the general belief that POCT (Point Of Care Testing) devices will retain attached displays (60% agreeing) while the situation for home test devices is hard to discern as 36.7% strongly agree and 23% strongly disagree home use IVDs lose displays.”  This key takeaway of the medical device industry may be typical for headless embedded devices' future. The future might depend on the particular use case.

There will be more headless embedded devices in the coming years. In fact, some industries will see many more headless embedded devices. Headless devices with remote access over the user's mobile device might become the dominant implementation design in industries such as the home automation business. We may see fewer fridges, ovens, and washing machines with large displays in the future, but rather widespread WIFI connectivity.

I do believe that we will see a lot of hybrid implementations in the next five years. Many embedded devices will have an in-built display that is just good enough to do the job, but it will also have means for a "headless" mode when the device is controlled and monitored from a mobile device. Another question is whether these hybrid applications are here to stay in the future in all industries. Is an additional mobile device the most cost-effective solution, primarily used only for this dedicated purpose in areas such as pharmaceutical or clean-room environments? Hybrid cars, for example, used to be a trendy thing. But carrying around always two motors (one combustion and one electric) is not exactly the lightest implementation.

Finally, based on our recent market study, there are industries such as Point of Care Testing devices, which are in no hurry to replace the screens of diagnostic devices with those of smartphones and tablets of healthcare practitioners or patients. The lower investment rate now by embedded device manufacturers in this industry will mean that any shift to headless embedded devices will be slower than in any other sector, if the transition happens at all.

If they haven't done so already, Embedded device manufacturers should now investigate strategies to implement hybrid embedded devices that support remote displays. Remote displays or companion apps will allow additional features than on the target device. Now is a good time to sponsor proof of concept implementations using different technology approaches. Upcoming technology and software framework decisions should include the dimension of remote UI technologies to benefit from the forthcoming trend of headless embedded devices.

If you are interested in the details of the market trend study, then please stay tuned. We will be publishing the complete final report in the coming weeks.

If you are interested to know more about Qt for WebAssembly, then you can check out the latest in the blog post here.

If you are interested to know more about the Qt VNC Server software, then you can check out details in the blog post here.

What can the automotive industry learn from video games?