What is new in the Qt Marketplace - Autumn 2020 Update

We have added three new libraries into Qt Marketplace this week: TreeView and Calendar for Qt Quick, and Qt Quick MultiEffect.

TreeView is a QML type to display data from any QAbstractItemModel. It extends TableView with expandable and collapsable nodes, which can be used in either a list or table mode. The former lets the user navigate up and down like in the list, but the left and right arrow keys will expand or collapse the nodes. The latter mode lets the user navigate between the columns as well using the left and right arrow keys.

Several convenience methods are available to map the model index with the item index in the view. Custom delegates can be created, but it is possible to customize the view delegate with several style hints. Row background and foreground colors, alternate background colors, text font, and collapsed/expanded icons can be easily changed without writing a new delegate. 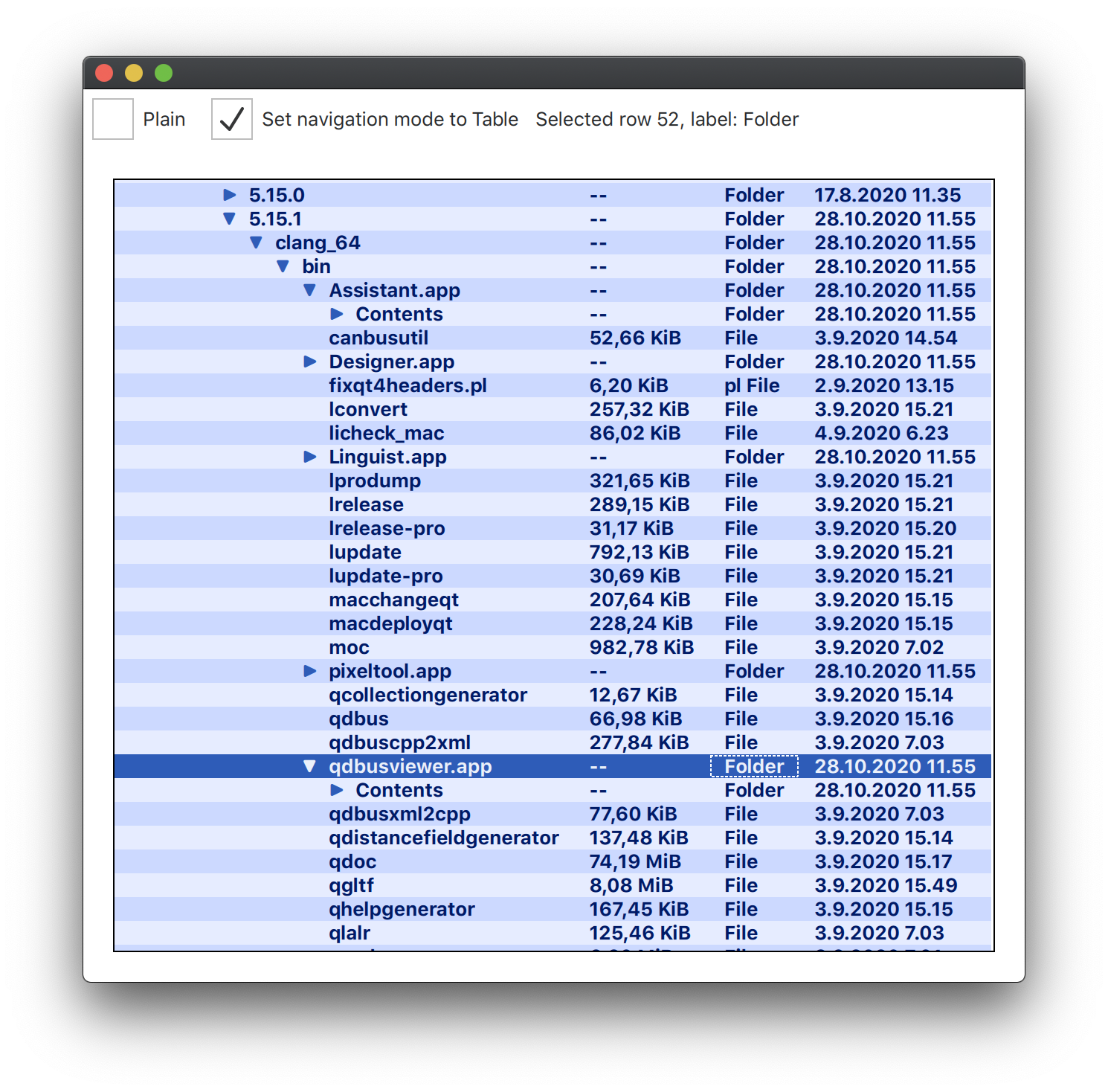 The Calendar provides a collection of modular building blocks for creating calendars in Qt Quick. It is based on the model/view framework, where the MonthGrid is the basic view, which can show rows of week numbers and day names.

By splitting the more traditional calendar control into several types, it's possible to easily create a custom calendar by assembling the desired controls using e.g., GridLayout or any other positioning system.
Combined with the Popup type from Qt Quick Controls, it's also possible to create popup calendar controls. 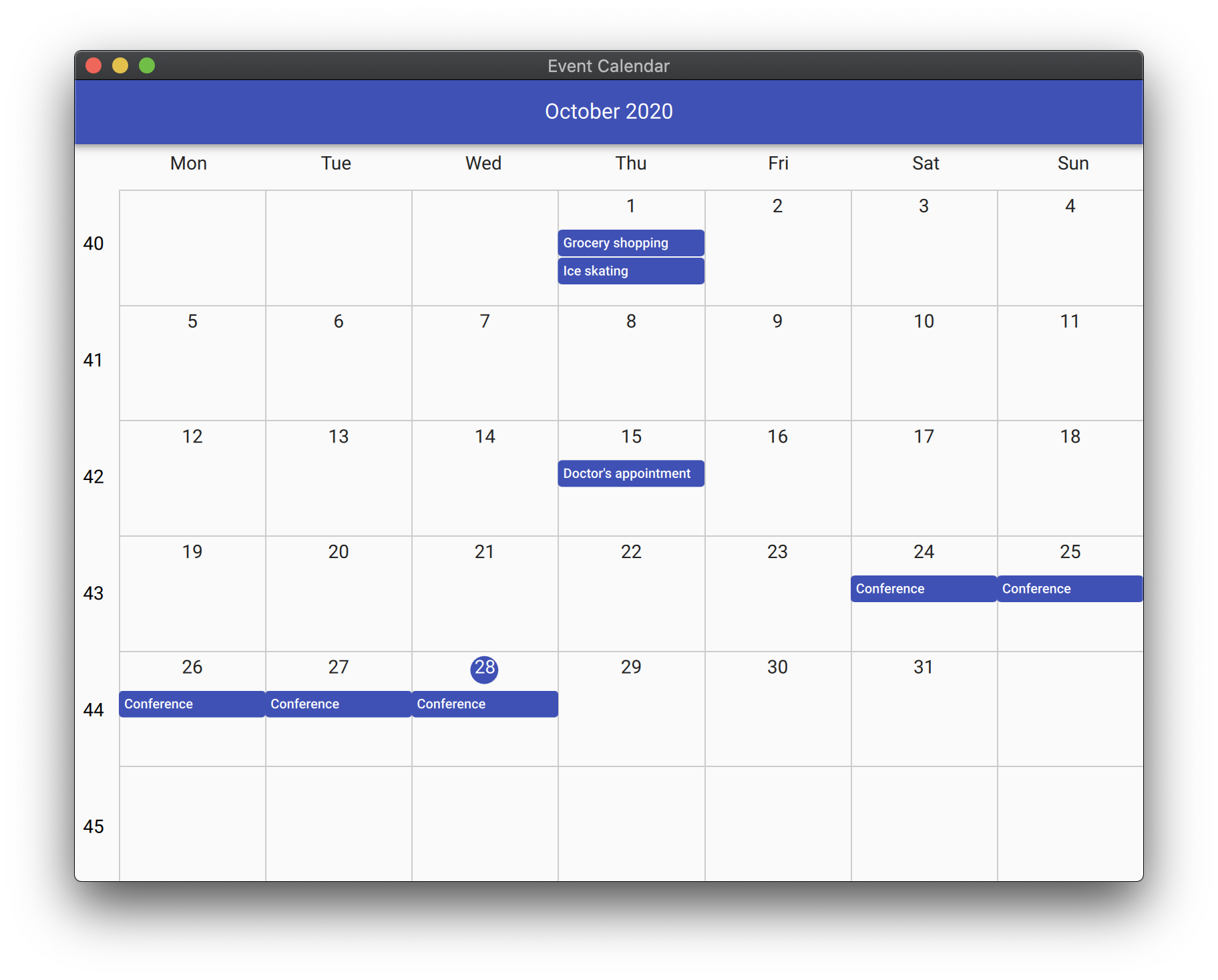 Qt Quick MultiEffect combines a subset of Qt Graphical Effects into a single item and shader effect. This shader is dynamically created based on which features/effects the user enables to make it always as optimal as possible. Qt Quick MultiEffect is notably more performant than using multiple Qt Graphical Effects when the amount of effects increases.

We like to thank everybody who has contributed to the libraries.

All three products are available under the GNU General Public v3 (GPLv3) license and the Qt Marketplace license. Anyone can play and test the libraries for free under the GPLv3. It's even possible to create products, as long as GPLv3 obligations are followed.

While some of the Marketplace modules are already part of commercial Qt licenses, we have tried to make it understandable as possible for each user, if the additional purchase in the Marketplace is even necessary for each purpose. In the Qt module product description, we show under which License the user will purchase the particular module in the Marketplace, if this module is included in Qt commercial, and if it is also available under open-source licenses. 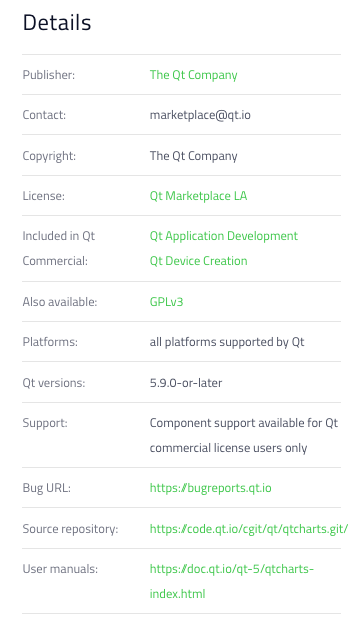 Product Description Details in the Qt Marketplace for Qt Charts

As an example, the purchase of Qt Charts in the Marketplace allows the user to combine this library with other modules within an LGPL project. On the other hand, commercial Qt users don't need to purchase this particular library because it is already part of the Qt for Application Development and Qt for Device Creation license.

How to get the libraries?

Navigate to Qt Marketplace and purchase the new libraries. We distribute the libraries in source code only, as they do not follow the Qt release cycle and we would not provide tested binaries for each Qt version.

The documentation of each library is included in the source package, but our plan is to make it available in Qt documentation as well. After a library has been purchased, a download link with the build instructions will be provided to the user.

As the libraries are created for Qt 5, we currently have the build files available for qmake. To build the libraries, use the following commands.

Obviously, you may use Qt Creator as well to build. Add the switch install into the project build settings.

Besides these three libraries, we have added continuously several other modules to the Marketplace over the last months:

These modules serve several purposes and are targeting to various Qt users. Even their dependencies with the commercial Qt licenses and their installations are different. For a better overview, we have summarized all Qt components regarding their availability in the following table:

In the Marketplace, you can also sign up for online training sessions for several Qt related topics to learn about the latest technologies. It is worth having a look!