The Qt Commercial Charts 1.0.0 Final release is now available. Read on for more details on what is in the 1.0.0 release and a draft roadmap for the future development based on the inquiries and feedback we have received from the Technology Preview and Beta releases.

There is a big demand for visually pleasing charts in modern user interfaces. We have designed Qt Commercial Charts to meet the needs for creating interactive chart based user interfaces – in addition to showing static data in a chart component.  To address these needs we have made the components versatile and extendable.

Developing a single chart type for a single use case with Qt is relatively easy. Qt offers good drawing and data model API’s. However such custom components might be difficult to expand to support several use cases and of course they increase the maintenance burden for application developers. Developing an extendable charting library requires several man months of implementation work and finding the correct chart presentation always requires a lot of implementation before seeing results in action.

When we started thinking about the Qt Commercial charts functionality we set the initial goals to: 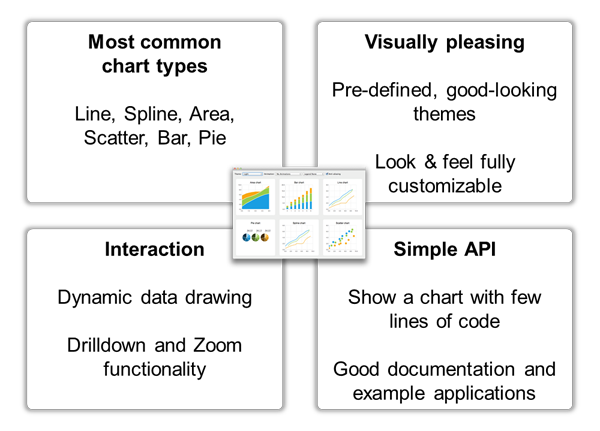 Based on the feedback we have received from the earlier releases it seems that we have succeeded in creating a valuable add-on for the Qt Commercial users. Of course we are not able to fulfill all the chart needs, but the 1.0.0 release is a solid base for future development. Naturally, with the full source code provided and flexible Qt Commercial licensing the Qt Commercial Charts can be also used as a good starting point for building highly customized charting components.

For future development we have planned two releases for the second half of the 2012 and the preliminary content for those releases is:

Get the Charts now

Qt Commercial Charts 1.0.0 release is now available in the Customer Portal. It is released as a source package. We will provide binary packaging in conjunction with the upcoming releases.

As always with Qt Commercial, the charts are fully covered by our standard support. If you have any issues using them, just contact our support team through the Customer Portal.

Not a Qt Commercial Customer Yet?