I am just back from FOSDEM 2013, the Free and Open source Software Developer's Europe Meeting in Brussels, Belgium, 'The best Free Software and Open Source events in Europe', at least according to its organizers. With an amazing 486 presentations covering almost every topic currently hot in the free and open source world cramped into just two days and around 7000 visitors this year, that claim may very well be the truth.

Of course the very best event is not complete without Qt! Qt related presentations ranged from Razor-qt and KDE's plasma active project as well as QML development on Sailfish to an update on the Qt project as well as highly technical topics like C++11 and its use in Qt. For the first time ever the Qt project also had a more permanent presence at the conference: The Qt Project booth. Conveniently located right between the Gnome and the KDE desktops we were able to demonstrate Qt on Android an iOS devices, Qt on wayland as well as Qt Creator. Staffed by (in alphabetical order) Digia (Andy, Frederik and me), Intel (Thiago) and woboq (Olivier) employees as well as volunteers from the KDE community (John and others that helped out occasionally) this booth also showed the strong community that has formed around Qt  since the project was originally set up in 2011.

The booth was a convenient place for people to find us, ask questions or just chat about Qt and was well visited during the whole weekend. 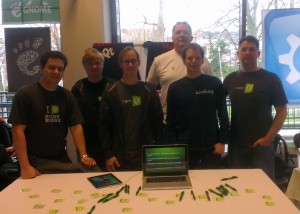 A big thank you goes out to the FOSDEM organizers and volunteers that made this event possible and allowed us to participate in it. It was great fun meeting so many new people and I am looking forward to FOSDEM 2014 already!