Tasuku Suzuki, who has been working hard with the Japanese Qt community has earned the Qt Champion title.

Suzuki-san got his first introduction to Qt when as a student back in 2002 he needed to make a UI for a scientific simulator he had written as part of his studies. He tried out several different toolkits and found Qt best suited for his needs.

After that Suzuki-san got more involved in Qt, when  he joined Trolltech in 2006, as a local technical sales support person for Japan. Suzuki-san and his colleagues did a lot of work to get Qt more known locally in Japan. They at some point translated the whole Qt website to Japanese, to make it more accessible. He was also heavily involved in making the Japanese Qt Developer Conferences happen in 2009 - 2011. 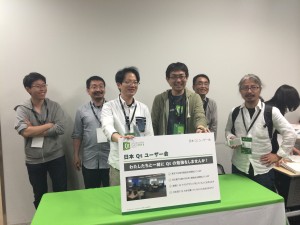 More recently Suzuki-san has been heavily involved in the Qt Meetups in Japan. The meetups originate from 2010, when @vivisuke started having Qt meetups in his home city. The meetup activity spread inside Japan and soon there were quite a lot of separate meetups in different cities. In 2012 these meetups joined to form the Japan Qt Users' Group. Around this time Suzuki-san was already active in the Tokyo meetup and the community agreed that he could take over organising the Tokyo meetups.

The format of the meetups in Japan varies, but Suzuki-san has changed the format from a presentation style event to a more active coding event. Everyone can come to the meetup and code, study and ask questions on Qt. These meetups have been happening continuously every month since January 2013, and have attracted new developers to Qt too.

One of the fun details in the meetups is the Qt Sweets Division with @hermit4, whose mission is to provide snacks for the meetups. The results are pretty impressive (cake, choclate and cake 2).

Suzuki-san codes himself too, he has worked on different things, including Japanese text input for Qt based platforms.

Another interesting project Suzuki-san is working on, is silk- Simple and flexible web framework. Silk is a Qt project that makes it possible to write server-side code with QML and JavaScript. It comes with everything needed to get running fast with Qt on the server.

Suzuki-san has also contributed code to Qt for several years, and has several contributions to his name.

A package of goodies is on it's way to Japan, and a one year Qt Professional license has been given to Suzuki-san. I would like to congratulate Suzuki-san on his new title as Qt Champion!

Monthly subscriptions are back!