Multi-process embedded systems with Qt for Device Creation and Wayland

With the Qt 5.4 update for Qt for Device Creation it is now possible - on certain embedded systems - to run Qt applications on top of a Wayland compositor by relying only on the provided reference images without any additional modifications. While the stable and supported approach remains eglfs, the lightweight platform plugin that allows running fullscreen Qt applications on top of EGL and fbdev with the best possible performance, those who do not require any of the enhanced tooling but need to have multiple GUI applications running on the same screen can start experimenting with a Wayland-based system already today.

In this post we will take a look how this can be done on i.MX6 based systems, like for example the Sabre SD and BD-SL-i.MX6 boards.

The wayland platform plugin provided by the Qt Wayland module is now an official part of Qt 5.4.0. Whenever the necessary dependencies, like the wayland client libraries and the wayland-scanner utility, are available in the sysroot, the platform plugin will be built together with the rest of Qt. In the toolchains and the ready-to-be-flashed reference images for Sabre Lite and Sabre SD everything is in place already. They contain Wayland and Weston 1.4.0, based on Yocto's recipes (daisy release).

We will use Weston as our compositor. This provides a desktop-like experience out of the box. Those looking for a more customized experience should look no further than the Qt Compositor libaries of the Qt Wayland module which provide the building blocks for easily creating custom compositors with Qt and QML. These components are still under development so stay tuned for more news regarding them in the future. 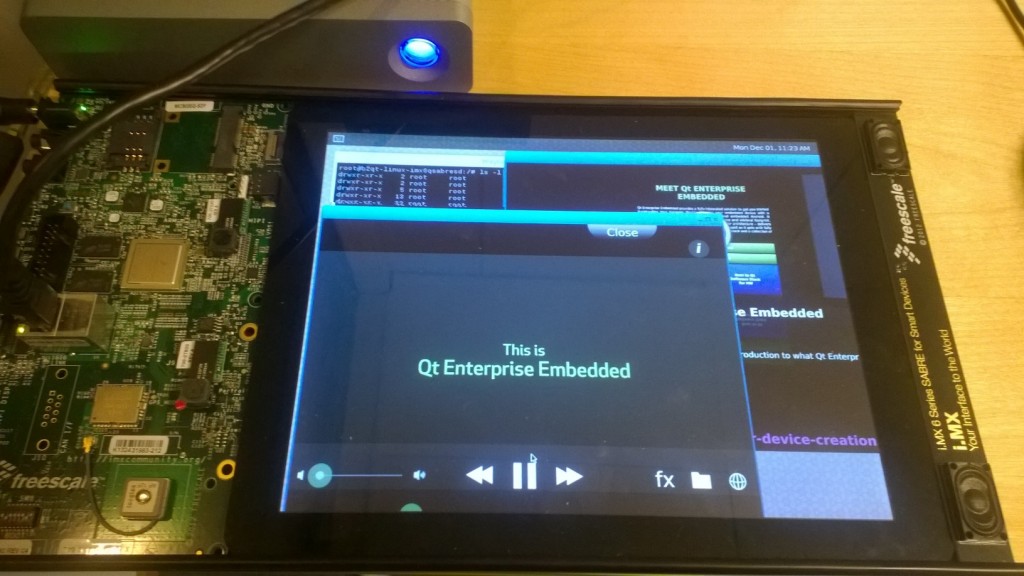 Now let's see what it takes to run a compositor and our Qt applications on top of it on an actual device. It is important to note that there is no tooling support for such a setup at the moment. This means that deploying and debugging from Qt Creator will likely not function as expected. Some functionality, like touch input and the Qt Virtual Keyboard, will function in a limited manner. For example, the virtual keyboard will appear on a per-application, per-window basis instead of being global to the entire screen. Support for such features will be improved in future releases. For the time being performance and stability may also not be on par with the standard single-process offering. On the positive side, advanced features like accelerated video playback and Qt WebEngine are already functional.

and that's it, we have successfully converted our device from a single GUI app per screen model to a desktop-like, multi-process environment. To see it all in action, check out the following video: