In C++, we are accustomed to have the operator+to perform string concatenation, regardless of whether we are using the standard library (aka STL) or Qt. This allows us to write things like the following snippet:

This can be implemented in a much more efficient way by creating a string instance that preallocates the memory needed for storing the final result, and then consecutively calling the QString::appendmember function to append each of the strings we want to concatenate one by one:

Alternatively, we could use QString::resizeinstead of QString::reserve and then use std::copy(or std::memcpy) to copy the data into it (we will see how to use std::copy for string concatenation later). This would likely improve the performance a bit (depends on the compiler optimizations) because QString::append needs to check whether the string’s capacity is large enough to contain the resulting string. The std::copyalgorithm does not have this unnecessary extra check which can give it a slight edge.

Both of these approaches are significantly more efficient than using the operator+, but it would be annoying to have to write code like this every time we want to concatenate a few strings.

Now, before we continue to how Qt solves this problem now, and a possible way to improve this in Qt 6 with the nice features we got in C++17, we need to cover one of the most important and most powerful algorithms from the standard library – the std::accumulate algorithm.

Imagine we gave a sequence (for example aQVector) of strings that we want to concatenate instead of having them in separate variables.

The algorithm does what you’d expect in this example – it starts with an empty QString and adds each of the strings from the vector to it, thus creating a concatenated string.

This would be as inefficient as our original example of using the operator+ for concatenation since std::accumulate uses the operator+ internally by default.

In order to optimize this implementation like in the previous section, we can just use std::accumulate just to calculate the size of the resulting string instead of doing the whole concatenation with it:

This time, the std::accumulate starts with the initial value 0and for each string sin the vector of strings, it adds the length of sto that initial value, finally returning the sum of lengths of all strings in the vector.

This is what std::accumulate means to most people – summation of some kind. But this is a rather simplistic way of looking at it.

In the first example, we did sumall the strings in the vector. But the second example is a bit different. We are not actually summing the elements of the vector. The vector contains QStrings and we are adding ints.

As seen in the previous code snippet, the accumulator does not even need to be of the same type as the values in the vector. We had a vector of strings while the accumulator was an integer.

We can leverage this to do something more fun.

The aforementioned std::copy algorithm takes a sequence of items that need to be copied (as a pair of input iterators) and the destination (as an output iterator) where the items should be copied to. It returns the iterator pointing to the element after the last copied item in the destination collection.

This means that if we copy the data of one source string into the destination string using std::copy, we’re going to get the iterator pointing to the exact location where we should copy the second string’s data to.

So, we have a function that takes a string (as a pair of iterators) and one output iterator, and gives us a new output iterator. This kinda looks like something we can use as the operation for std::accumulate to implement efficient string concatenation with:

The first invocation of std::copy will copy the first string to the destination defined by result.begin(). It will return the iterator in the resultstring just after the last copied character, and that is where the second string from the vector will be copied to. The third string will be copied after that, and so on. 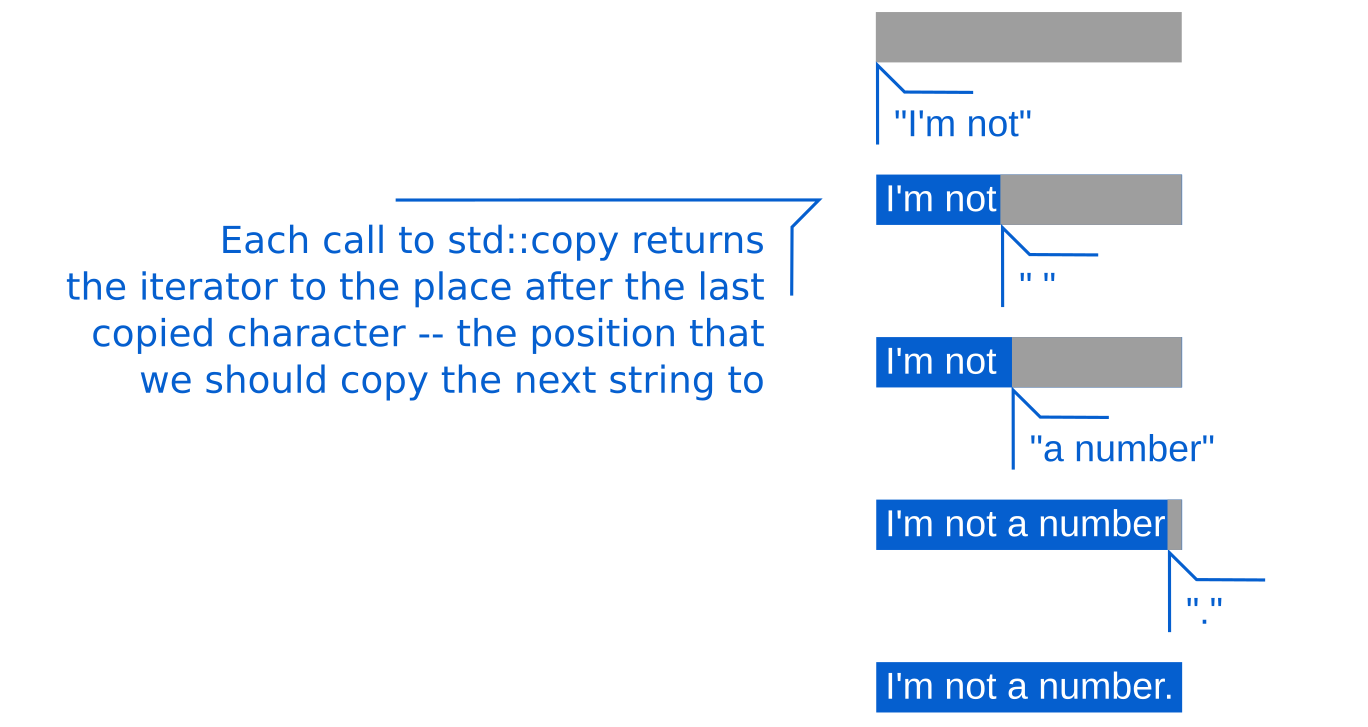 In the end, we get a concatenated string.

We can now get back to the efficient string concatenation using operator+ in Qt.

We’ve seen that the problem with string concatenation stems from the fact that C++ evaluates the previous expression in steps – by calling the operator+several times where each call returns a new instance of QString.

While we can not change the way C++ evaluates this, we can use a technique called expression templatesto delay the actual resulting string calculation until the whole expression is defined. This can be done by changing the return type of operator+ not to be a QString, but some custom type that just stores the strings that should be concatenated without actually performing the concatenation.

Basically, a more complex version of the following:

When you concatenate several strings, you will get a more complex type where several QStringBuilders are nested into each other. Something like this:

This type is just a complex way to say “I hold four strings that should be concatenated”.

When we request the QStringBuilderto be converted to a QString (for example, by assigning it to the QString result), it will first calculate the total size of all the contained strings, then it will allocate a QStringinstance of that size and, finally, it will copy the strings one by one into the resulting string.

Essentially, it will do exactly the same thing we did earlier, but it will be done automagically, without us having to lift a finger.

This means that all instances of QStringBuilderare a kind of a binary tree in which QStrings are leaf nodes. Whenever something needs to be done on the contained strings, the QStringBuilder needs to process its left sub-tree, then the right sub-tree recursively.

Instead of creating binary trees, we can use variadic templates (available since C++11, which was not available when QStringBuilder was invented). Variadic templates allow us to create classes and functions that have an arbitrary number of template arguments.

This means that, with the help of std::tuplewe can create a QStringBuilder class template that holds as many strings as we want:

When we get a new string to add to theQStringBuilder, we can just addit to the tuple using std::tuple_cat which concatenates two tuples (we’ll be using operator% instead of operator+ as this operator is also supported by QStringand QStringBuilder):

This is all and well, but the question is how do we process the variadic template parameter packs (the ... part of Strings).

With C++17, we got a new construct for processing parameter packs called fold expressions.

The general form of fold expressions look like this (the operator+ can be replaced with some other binary operator like *, %…):

If we wanted to concatenate strings in a template parameter pack using a fold expression, we could do it like so:

This sounds familiar, doesn’t it?

We saw the same behavior with std::accumulate. The only difference is that the std::accumulate algorithm operates on runtime sequences of data (vectors, arrays, lists, etc.) while the fold expressions operate on compile-time sequences, that is, variadic template parameter packs.

We can follow the same steps for optimizing the previous concatenation implementation that we had with std::accumulate. First, we need to calculate the sum of all string lengths. This is quite simple With fold expressions:

When the fold expression expands the parameter pack, it will get the following expression:

So, we got the size of the resulting string. We can now proceed on to allocating a string sufficiently large for the result, and append the source strings one by one to it.

As previously mentioned, the fold expressions work with C++’s binary operators. If we want to execute a function for each element in the parameter pack, we can use one of the strangest operators in C and C++ – the comma operator.

This will call append for each of the strings in the parameter pack giving us the concatenated string.

The second approach we took with std::accumulate was a bit more complex – we had to provide a custom operation for accumulation. The accumulator was the iterator in the destination collection which denoted where we should copy the next string to.

If we want to have a custom operation with fold expressions, we need to create a binary operator. The operator, just like the lambda we passed to std::accumulate, needs to take one output iterator and one string, it needs to call std::copy to copy the string data to that iterator, and it needs to return a new iterator pointing to the element after the last copied character.

For this, we can redefine operator<<:

We now know how to efficiently concatenate a collection of strings – be it a vector or a variadic template parameter pack.

The problem is that our QStringBuilder does not have either. It stores the strings inside of a std::tuple which is not an iterable collection, nor a parameter pack.

In order to work with fold expressions, we need parameter packs. Instead of the parameter pack containing strings, we can create a pack that contains a list of indices from 0 to n-1 which we can later use with std::getto access the values inside of the tuple.

We just need to create a wrapper function that creates the index sequence for our tuple, and call the concatenateHelper function:

This post dealt only with the actual string concatenation. In order to apply this to the real QStringBuilder, we would need a few more things, and the implementation would become a bit overwhelming for reading as a blog post.

We would need to be careful with operator overloading – we would have to use std::enable_iflike the current QStringBuilder implementation to make it work all Qt’s concatenable types and not taint the global space with those operators.

It would also be beneficial to be able to handle temporaries passed to the string concatenation in a safer way as QStringBuilder stores only the references to the strings which, in the case of temporary strings, can easily become dangling references. 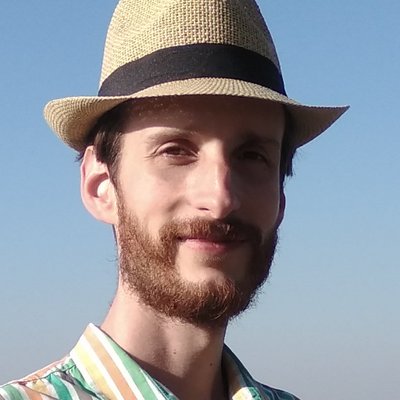 Ivan is a Senior Software Engineer at KDAB. He is the author of Functional Programming in C++, a KDE developer and an advocate of the Free/Libre Software movement. Much of his online presence revolves around the development of KDE, most notably Activities and Plasma, with frequent excursions to artwork creation. Ivan holds a PhD from the Faculty of Mathematics in Belgrade. He evangelizes functional programming and modern C++ techniques by giving talks and writing C++-related articles on his blog.