Qt for MCUs 1.6 is now available for download in the Qt Installer. Read on for more details.

Exactly one year ago, Qt for MCUs 1.0 was released. It brought the convenience of the QML language and the power of the Qt Quick  APIs to platforms that had always been out of reach for Qt: microcontroller-based embedded systems. With the introduction of the Qt Quick Ultralite engine and an all-new QML compiler optimized for ultra-low memory footprint, memory requirements for Qt were brought to record new lows. Instead of a dozen of megabytes of RAM required to run an optimized basic QML application with the regular Qt Quick framework, you could now fit the same application within a couple hundreds of kilobytes.

It didn't even mean you had to give up on the eye candy. By using technologies such as NXP's PXP or STMicroelectronics' Chrom-Art to the fullest, the graphics engine could enable fancy-looking user interfaces with silky smooth animations.

If you still don't believe it, you can give it a try with a free trial, or download prebuilt binaries ready to be flashed on a selection of popular MCU evaluation boards.

Making Qt available on resource-constrained devices was just the first step and we had a long road ahead. So over the past 12 months, we have put in a lot of effort into implementing missing features, fixing the most important issues, and in general adapting Qt to the quirks of software development on microcontrollers. No less than five new versions were released through 2020, each introducing new features and fixing many issues. Some of the most important ones were:

Today, we are releasing the sixth and last version of the year, which introduces support for the IAR Embedded Workbench build tools.

In addition to Arm GCC, you can now use IAR Build Tools for Arm V8.50 to compile your Qt for MCUs application. The C++ code generated by the QML compiler and all of the QUL engine itself is fully compatible with the IAR compiler. To make it easy to work with Qt's tools and build system, we added an integration with CMake and ready-to-use kits in Qt Creator. In addition, you can download Qt Quick Ultralite libraries prebuilt with IAR.

Thanks to this neat feature in IAR Embedded Workbench IDE, you can use all its debugging and tracing features with your Qt for MCUs application even if you built it using Qt Creator or CMake.

IAR support packages can be found as a separate item for each board in the Qt Installer: 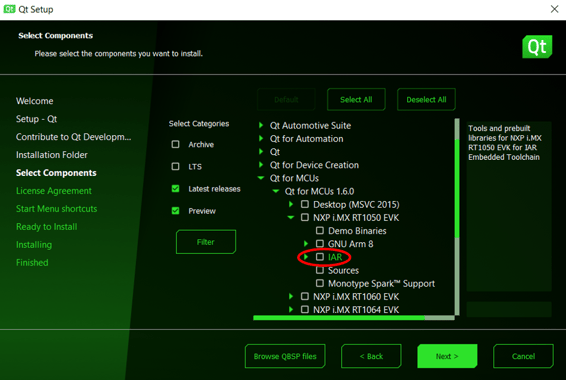 Note that you will to need to use the upcoming 4.14.0 version of Qt Creator to use the IAR kits.

The full list of changes in Qt for MCUs 1.6 can be found in the changelog.

Issues you might find or any suggestion for new features or improvements can be submitted through Qt Support or directly in our bug tracker.

For all discussions around Qt for MCUs, including sharing ideas, tips and tricks, visit the Qt for MCUs forum.

Next year, we will continue to bring many exciting new features to Qt for MCUs while raising the quality and stability of the product to the highest standards. We will also ensure all existing and future QML APIs in Qt Quick Ultralite are fully compatible with Qt 6.0 and following releases.