Remember the days when all the tools at hand looked like a Basic interpreter with 30 commands, the most usable being PEEK, POKE and PRINT? Yes, that's been a while...

Nevertheless, a few months ago I found myself doing lots of "printf-style debugging" again. Even with some basic IDE support that nicely displays QString and QByteArray, digging into more complex structures was just no fun. One of the reasons was certainly that we humans like to think of a QHash at a "higher level" of abstraction, in a way that's fairly different from the actual implementation - and it's only the low level implementation a debugger usually sees.

One solution is to bridge the gap between the low level (pointers, anonymous unions, ...) and the high level (a bunch of keys with associated values) externally. This is done by asking the debugger for the type of an object only, and then - instead of asking for the low level data - tell it what part of the application's memory is a hash key and what part is the corresponding value. This information is then transfered to Qt Creator's "Locals & Watchers" view.

Below is the result for some nested containers and two QObjects with a parent-child relationship: 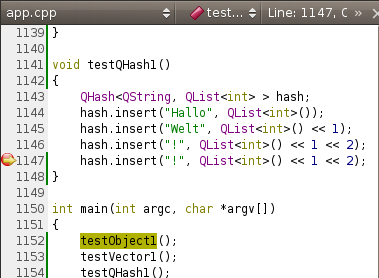 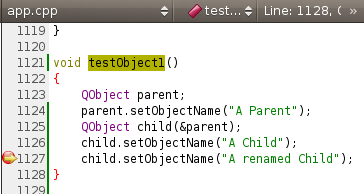 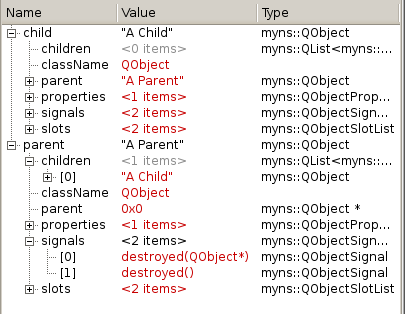 In the latter case the "more traditional" approach of displaying low-level data would produce: 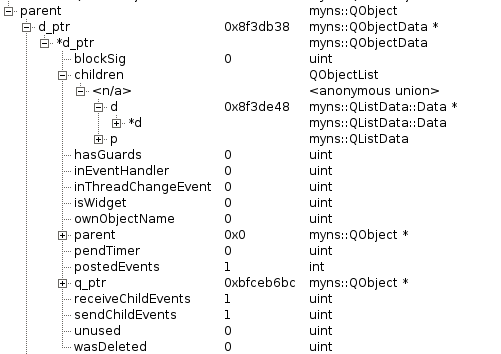 The low-level display of a QHash is even less impressive. Of course, Qt Creator can easily toggle between the views, but it's rarely needed.

For the convenience of the less Qt-centric audience similar displays have been added for a few widely used containers from the C++ Standard Library, proof coming here:

The display of aforementioned types (and a few more) works already with the Creator 1.1 release from April on Linux, Windows and Mac. All that's needed is a not-too-old version of the GNU debugger. Gdb version 6.8 is just fine and widely available, on Mac Apple's gdb will do.

Last but not least, some special news for the people on the Windows side of the world: Starting with Creator 1.2 the debugger frontend will also support Microsoft's debugger, even featuring the same friendly display of complex data.