Since Qt is cross platform, targeting several platforms with your application should be fairly easy. However, from a practical perspective it can be fairly inconvenient if you want to distribute installable packages for multiple Linux distributions like Debian, Fedora and openSUSE. It can be quite time consuming to maintain distro-specific packages for five or six different distributions. Wouldn’t it be nice to offload such work to others, focusing most of the effort on adding value to your actual application?

A community project called "openSUSE build service" (OBS for short) has answered this challenge for many developers. OBS offloads the actual building of the packages for each Linux distribution. With OBS you simply upload your source code to a server, select target distros, and a short while later you can pull down distro-specific binaries of your apps. 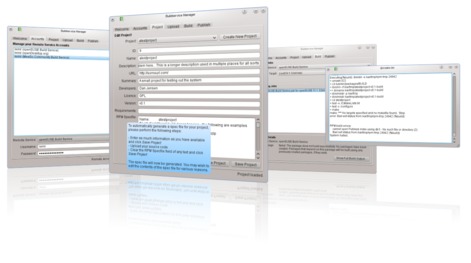 Over the past few years we have seen a number of requests come in from community groups asking for integration of a package building service into Qt to better support Linux distros. In fact, in 2008 at the annual KDE conference in Belgium, Klass Freitag was asking community developers to use openSUSE build service. Having a 'click-to-build' distro packages solution for Qt based apps, integrated in your favourite free software IDE.

Based on feedback from several community groups we agreed to sponsor the creation of a plugin that connected Qt Creator with the OBS, and we are pleased to announce that we are releasing this into beta today.

This first beta release of the plugin is made for Qt creator. Frank Karlitschek is one of the main developers, and he is urging free software developers to test it out, and engage in further development and integration with other IDE's. Frank suggests Eclipse or Kdevelop as obvious candidates. Maybe someone would integrate the Qt Creator plugin with vim and emacs too, he says.

There are some really interesting aspects to this technology. It includes freedesktop.org services with social media libraries, e.g the Qt Creator plugin uses libAttica, which is an official part of MeeGo platform.

If you want to learn more, you can read about the plug-in and download it from this page: