Last week our first Qt Champion was awarded his title in Berlin at the Qt Developer Days Europe. Samuel Gaist (SGaist on the forums) is now a Community Builder Qt Champion.

Aside from Samuels sheer amount of activity on the forums, his other distinguishing feature is his positive attitude to all questions. He sees the positive wibe as a feature of the community and wants to keep the positive energy flowing by contributing himself. in Qt people are willing to help each other with questions and problems, so it is one form of giving back.

Samuel had heard of Qt as he had used Linux and the KDE desktop about ten years ago, but he learned about Qt properly during his studies at the "HES-SO Valais Wallis" school. At the start of 2012 Samuel joined the Qt project forums and hasn't looked back since.

The biggest Qt project Samuel has up-to-date worked on has been the AgiScan film scanning software, which he worked on at Edeltech Ltd. He also did a talk at the Qt Developer Days Europe 2014 about his experiences on the project. 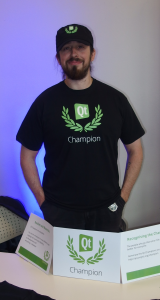 In the last year or so Samuel has also started contributing code to Qt. It all sterted with a question on the forums about a bug in QFileDialog on Mac OS X. Samuel figured he could actually fix the bug and went ahead and answered the question and fixed the bug. From then on Samuel has taken to occasionally looking at the Qt bug reporting system and finding places where he can help, like bug fixing, documentation updates and code cleanups. Lately Samuel has also done some feature work with help from other contributors.

Samuel has found that the diverse background of people involved in the Qt project makes for good discussions, be it on the forums, contribution reviews or the mailing lists. Talking and getting feedback makes for better contrbutions.

In addition to the nice cap and t-shirt, Samuel will be receiving a Qt Professional license for the next year.