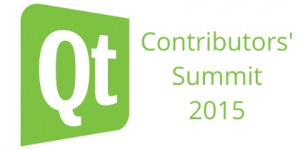 It's half a year since the 2014 Qt Contributors' Summit, and now is a good time to give an early warning about next years QtCS.

We'll be inviting you to Oslo in early June to come and discuss the current state and future of Qt.

The Qt Contributors' Summit is an annual event where the people contributing to Qt gather to have fun, discuss where Qt is going and even code a little.

The plans include a pre-party / hack event before the actual summit at The Qt Company offices, two days of unconference style workshops and an evening out in Oslo.

Oslo is a beautiful city in June well worth a visit, especially when combined with the possibility to meet other Qt contributors.

If you aren't an active contributor yet, don't worry, you still have plenty of time to start contributing to Qt. Code, documentation, tests, forum activity, helping new users... everything you do to help out Qt is considered contributing.

QtCS 2014 in Berlin was a great event, let's make QtCS 2015 even better.
The trolls welcome you to the home of Qt!