Qt 5.9 LTS already shows a great improvement of the overall performance compared to the previous long-term supported Qt 5.6 LTS release. These are summarized in a blog post about Performance Improvements with Qt 5.9 LTS and Qt Quick Performance Improvements on 64-bit ARM. With Qt 5.12 LTS we have continued to tune these further and taken a deeper look into the areas of QML engine memory consumption and JavaScript performance.

Applications use memory for multiple things and to optimize the overall memory usage a good start is typically to look into the graphics assets, leveraging asset conditioning, the Qt Lite feature system to remove unused functionality and other techniques to optimize the memory usage. As it is very difficult for an application developer to affect the memory used by the QML engine itself, we have taken a deep look into how it can be reduced.

One important optimization done with Qt 5.12 LTS are to the data structures used in conjunction with compiled QML. The QML engine creates cache files that contain a dump of internal data structures on the fly when loading a .qml or .js file at run-time (named .qmlc and .jsc). If found, these files are mapped into the application process and used directly without requiring a compilation step. We have an option to create those cache files ahead of time while compiling the application. In that case, we don't have quite the same degree of visibility into the type system as the QML engine has at run-time. This leads to a staged approach where we can't resolve quite as much as when generating the data structures at run time, requiring us to do some additional work on top of the pre-generated cache files.

In Qt 5.12 LTS two changes are done to reduce the memory consumption when using such ahead-of-time generated cache files:

In addition to the changes described above, we have done also multiple smaller improvements to reduce the memory consumption of the QML engine, while still keeping the performance on a good level (and actually improving quite a bit in some areas). 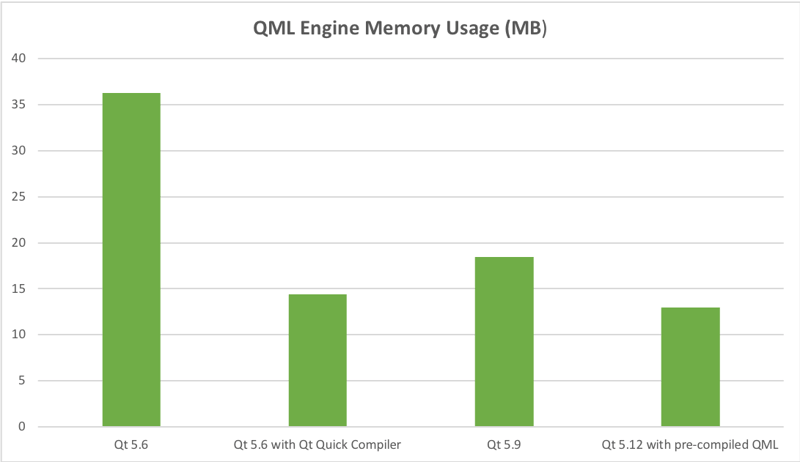 A major difference of Qt 5.12 LTS compared to Qt 5.9 LTS and Qt 5.6 LTS is the completely new compiler architecture of the QML engine introduced with Qt 5.11. The new pipeline has also enabled making some of the memory use optimizations described earlier in this post. With the new pipeline, we get a significant improvement in JavaScript performance, even with the addition of ECMAScript 7 support in Qt 5.12.

To compare the JavaScript performance for different Qt versions, we have run the same JavaScript benchmark with Qt 5.6.3, Qt 5.9.7 and Qt 5.12 Beta. The benchmark is run on 64-bit ARM processors using Linux operating system.

Qt 5.9 and Qt 5.12 both support JIT, so between these the improvements are mainly due to the new compiler architecture. Compared to Qt 5.9 the overall JavaScript performance improvement of Qt 5.12 is 21%.

Because it is so easy to break performance, we regularly run several different kinds of performance tests. These also help in analyzing how the various optimizations work across different platforms and to make sure feature development and error corrections do not have unintended side effects to performance. Some of these results are visible at testsresults.qt.io, for example the QML Bench tests.

To compare the effect of Qt versions, we have run the full QML Bench test set with Qt 5.6.3, Qt 5.9.7 and Qt 5.12 Beta. To improve the comparability of results, we are running Qt Quick Controls 1 tests on Qt 5.6, as it does not have Qt Quick Controls 2 functionality. Otherwise the functionality tested by the QML Bench is same between these Qt versions. For these tests, QML Bench was run on an Nvidia Jetson TX1 development board (64-bit ARM processor) running the Nvidia supported Linux for Tegra Ubuntu 16.04. 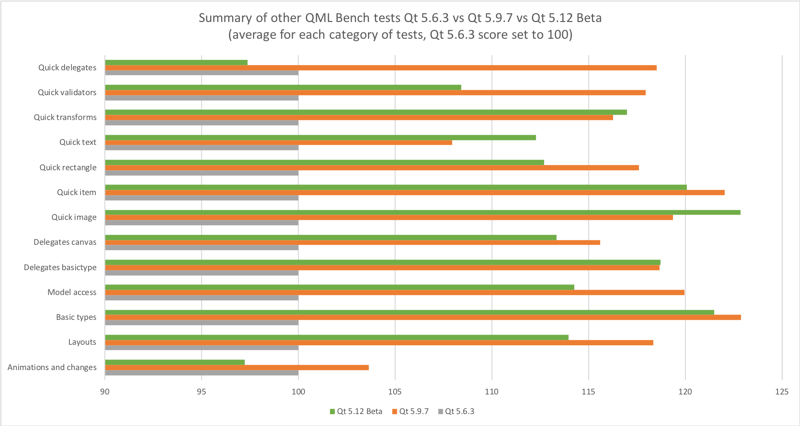 For the overall QML Bench test the performance with Qt 5.9 is double compared Qt 5.6 (109% better than Qt 5.6), and the performance of Qt 5.12 is on the same level (98% better than Qt 5.6). The improvements in areas other than JavaScript and Qt Quick Controls are smaller, typically between 15 to 25%. Comparing Qt 5.9 and Qt 5.12 gives a bit more of a mixed picture. While there are quite some areas where performance is better with Qt 5.12, we are also seeing performance regressions in a couple of test cases. Those regressions are things we will have examine closer over the next couple of months and want to improve upon in patch level release for Qt 5.12.

Note that QML Bench is not directly representative of the real-life application performance. Each application uses different QML functions, typically some multiple times. QML Bench on the other hand uses all of the functionality rather equally and does not weight results according to frequency of use in the real world – so it is always recommended to gather performance data with your own application to see how much its performance improves.

In this post the focus was in the Qt Quick performance, where we have improved the performance of Qt 5.12 LTS significantly compared to the earlier LTS releases of Qt in three important areas:

In addition to these, Qt 5.12 LTS provides many other performance improvements as well. One important improvement in Qt 5.12 LTS is the possibility to use pre-generated distance fields of fonts. Earlier Qt has created the distance fields during the application startup, which can consume a lot of CPU cycles especially for non-latin fonts (that have many glyphs) and complex latin fonts (that have a lot of different shapes). With Qt 5.12 LTS, we release a tool called “Qt Distance Field Generator”, which allows you to pregenerate the distance fields for either a selection of the glyphs in a font or all of them.

Other areas where we have been improving performance include, for example, Qt 3D CPU usage and Qt 3D memory consumption (especially beneficial for Qt 3D Studio applications). Qt 5.12 LTS also introduces a completely re-designed TableView, which takes the performance of large tables to completely different level than the old TableView implementation of Qt Quick Controls 1. Of course, Qt 5.12 LTS also benefits from the compressed texture support introduced with Qt 5.10 and improved with Qt 5.11, as well as multiple other improvements done since the previous LTS release of Qt.

Qt 5.12 LTS is currently in Beta phase and we are working hard to get the Qt 5.12.0 release out at the end of November. If you have not yet looked into Qt 5.12 LTS, please take it for a spin.