We are happy to announce the release of Qt for MCUs 1.1 Beta today!

In case you missed our previous posts about Qt for MCUs, it is a complete graphics framework and toolkit that enables the creation of low memory footprint QML GUIs for devices powered by microcontrollers.

You can find below some of the main features added in this version. The complete change log can be found in the documentation snapshots.

A new resource system is introduced, based on the qulrcc tool. It provides more flexibility to include different types of assets into your application.

You have now the possibility to choose whether image assets should be decompressed during compilation and bundled in a raw format (only behavior available in 1.0), or if they should be compressed to reduce flash memory usage. In both cases, extra optimization steps are performed to further optimize the footprint. PNG is the only "runtime" compression format supported in 1.1.

Additionally, a new configuration option lets you define the loading strategy for image data: direct read from flash memory for lower RAM consumption at the cost of reduced performance, or copy to RAM for better performance but higher RAM consumption.

In addition to running Qt on bare metal, already supported in 1.0,  we introduce support for the popular FreeRTOS operating system. The feature is provided as technology preview in 1.1 and gives you the possibility to run background tasks without blocking the Qt Quick user interface.

Qt Charts for MCUs provides a set of easy to use charts components for Qt Quick Ultralite and aims to be compatible with the Qt Charts API. The module is released as technology preview in 1.1 and includes bar charts support.

The final release of 1.1 is planned for mid-April but if you already want to give it a try, head over to the Qt for MCUs web page and register for an evaluation. The packages can then be downloaded from the  Qt for MCUs section in the Qt online installer. Note that the Preview package category must be enabled to see the Beta packages. 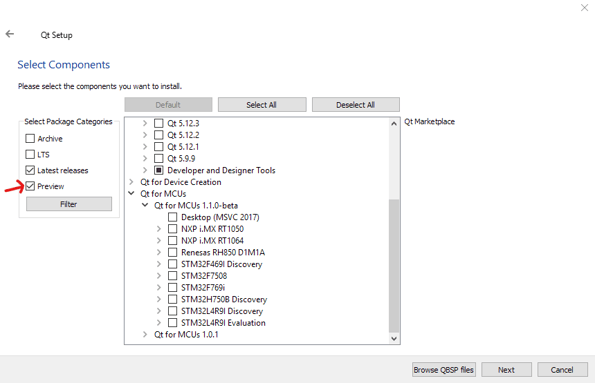 For a better integration in Qt Creator, you will also need to install the 4.12.0 Beta2 version of the IDE.

Please report any issue by creating a request in the Support Center and if you have an upcoming MCU project you want to discuss with us, feel free to contact us.