Today is the first day with Digia as the new owner of Qt. “Day 1” as we have called it internally. Today, Digia, with its new strong team, will start the journey to unleash Qt’s true potential together with the Qt ecosystem. Together we will make Qt thrive.

Earlier today we issued the official announcement summarizing some of the high level plans and directions. I wanted to write a bit more about our plans moving forward and to answer some of the questions we have been asked since we announced the transaction in August.

I am really happy to see so many of the talented Qt people joining Digia. Everyone is excited about the things we can achieve together. Qt is an amazing technology, unmatched by any other solution for cross-platform application development. Our intention is to keep Qt available for both commercial and open-source licensees and to actively continue developing both. Having a strong and united Qt community, taking the technology forward is tremendously important. Digia wishes to keep this ongoing and improving as we move forward together.

As part of the transition we have taken the responsibility to fund and operate the Qt Project and its infrastructure. Most of the systems have now transferred, and we are in process of transferring the remaining items, most importantly the CI system. Let’s go through some of these, so that you have more visibility to what is happening.

Let’s first visit a bit what does it mean in practice that the Qt technology, copyrights and trademarks have now transferred to Digia. To reflect the change, we are now changing the copyrights in all the applicable files of the Qt f ramework. You can see the progress of these changes in the source code repository as they are implemented. We expect to have these done before the next Qt release.

The copyright transfer also means that Digia is the licensing counterpart for both commercial and open-source versions of Qt. There are no changes done to the licensing: Qt continues to be available under commercial, LGPL and GPL license. It is your choice which one you see the best fit for your project. For details on the licensing, please visit our Qt Licensing page.

In addition to the copyrights, we now own all the Qt trademarks. We are in the process of setting up a new partner program and other needed items to govern the use of the Qt logos and other trademarks. 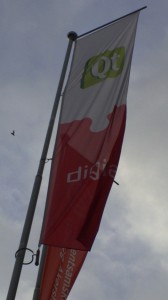 As part of the open governance, the Qt Project is hosted by a non-profit foundation. Digia provides the needed funding for the foundation in order to finance the hosting of the Qt project information systems including, the qt-project.org main site, code review and bug reporting tools, for example. Operation of these continues unchanged from this day onward.

The gatekeeper for the quality of Qt is our continuous integration, a.k.a CI, system. It is a combination of high build capacity and sophisticated procedures for constantly verifying that all modifications done to Qt are working correctly. The system is currently running at Nokia and we are in process of transferring it to the Digia data center. In addition to transferring the system, we are also changing the main tool to Jenkins. After this change, it will be much easier than before to connect external build agents to the Qt Project CI system, which helps in validating additional platforms.

We are targeting to complete the CI system transfer in about one month and naturally keep it operational during this time. After the transfer has completed, we will have some additional capacity available compared to the current technical setup. This will help us to better validate more platforms than before. We will also keep our old CI system operational for building and packaging the Qt releases during the transition.

One of the key items we are working on is to create Android and iOS in such a way that they are available for everyone, through the Qt Project. We want to have both Android and iOS platforms fully available to both commercial and open-source users of Qt. We see tremendous value in having these available for the widest possible audience.

Support for both iOS and Android already exists independently, where community driven efforts to run Qt 4.8 on the platforms has been successful. Leveraging these initiatives to provide full support within Qt 5 would be beneficial for the Qt Project. At the moment, the Android port is available from the Necessitas project hosted by KDE . It is possible to leverage Necessitas for both commercial and open-source Qt users already today. Additionally, we have had initial discussions with the main developer of the Necessitas project and both parties think it would be a good plan to continue development of Qt 5 support within the Qt Project. 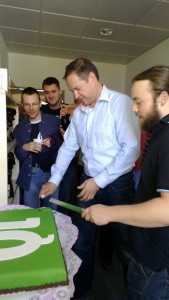 For iOS there is a Qt Labs research project done by Eike Ziller (now part of Digia Qt R&D) to run Qt on iOS. Even though it is more a proof of concept, than a full platform port, it nicely shows what is possible already with Qt 4.8. There also exists a commercial-only Qt 4.8 iOS plugin available from Mediator Software , which can be leveraged to create Qt 4.8 based applications for iOS. Although not as complete as the Android port, it can already be used for many kinds of Qt applications. We will continue discussions to see whether it would be possible to leverage it within the Qt Project. We will also need to decide how to tackle the current iOS restrictions that hinder use of Qt Quick.

Our main focus for developing Android and iOS support is on Qt 5. We will start the work on top of Qt 5.0, within the Qt Project, and target having these available for prime time in conjunction with the Qt 5.1 scheduled release for ~ Q2/2013. However, as the currently available Qt 4.8 based Android and iOS projects prove, it is possible to create applications already with 4.8 and 5.0.

Focus on Desktop, Embedded and Mobile

Qt has a large and continuously growing user base within desktop and embedded platforms. We aim to continue developing Qt further to meet the needs of these users, in addition to mobile. One of the key strengths of Qt, is its capability to create modern and interactive applications across a hugely diverse range of operating systems and devices. Unmatched by any other technology, Qt truly meets the cross-platform promise – at the same time delivering full native performance. One example of the work already ongoing is Qt Quick desktop components. And, as said before, we will make sure widgets are a viable option also in Qt 5.

Qt 5.0 is the current large focus of Digia’s R&D efforts as well as the main focus of the whole Qt Project. So far we have released the Alpha and the first Beta release and are now working hard to soon release the second Beta. Based on the feedback we receive, we will iron out the remaining glitches and aim to deliver the 5.0.0 release during Q4/12. We are making the effort in migrating to Qt 5 as low as possible and recommend that all active projects eventually migrate to it. After you have moved the ongoing development to Qt 5 it is easy to start using the new goodies it has to offer.

Today is Day 1 – the first day of Qt at Digia. It is a major milestone in the long history of Qt and marks the beginning of a new journey. We want to make Qt the most widely used cross-platform application development framework in the World. Together with a vibrant Qt community we can make it happen. We know it is the best, and we intend to keep it that way.