On Qt Data Visualization 1.1 we introduced a beta level optimization hint QAbstract3DGraph::OptimizationStatic and on 1.2 release the feature is fully supported. On this blog we’ll try to explore this optimization a bit more. We have also been asked how many items you can render on scatter graph. We hope that this blog answers to that question also.

The OptimizationStatic uses very few OpenGL calls and renders large data sets quite well. The drawback on this case is that the buffers have to be created before the rendering can start. The biggest factor for the buffer size and for the latency is the amount of vertices on the mesh type. For instance the smooth sphere has 264 vertices compared to cube's 24 vertices, whereas the point has only one vertice. So once the buffer is created it is up to GPU's power to process vertices. The best advice for large data sets is to aim to simple mesh types.

Let's tackle the question about the biggest item count. From the Qt Data Visualization point there's no hard limit for the item count. The ultimate limit comes from your graphics hardware when it just exhausts with the vertices. The question is now how many items you can have and still smoothly rotate and inspect the graph from different angles. Generally the excellent performance rate is considered as 60 FPS, but we can safely say that the usability remains good till 30 FPS.  To find out the limits we set up an application that gradually increased the number of items and measured the performance using QAbstract3DGraph::measureFps property.

The default optimization is ideal if you want to have complex mesh types instantly on the display or you are constantly updating the data. For instance like on the rotations example, where the position and rotation of the arrows are constantly updated. If you have large static data sets, you get a good performance with static optimization. Simpler mesh types like the cube and pyramid performs reasonable well and don't cause a noticeably latency. If you want to have custom mesh types, keep the number of vertices low, around 10-20 vertices. A point type is of course ideal for extremely large data sets. For instance to simulate a galaxy like presented on the example below where we have 105 000 star and dust items and the laptop is doing easily 60 FPS with static optimization. 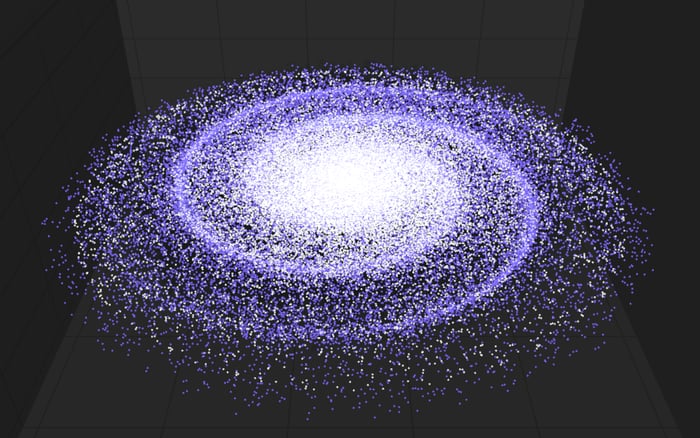