Preview of Qt 5 for Android

The first commit in the effort to port Qt 4 to Android was on Christmas Day, 2009: "Android mkspecs and semaphore" by BogDan Vatra.

On January 22nd, 2010, he committed "A small step for Qt, a giant leap for android" with a working graphics system plugin and could actually run Qt applications on an Android device. He uploaded a video to celebrate.

On February 20th, 2011, he announced the first usable release of Qt 4 for Android, under the moniker of Necessitas.

For the past 3+ years, BogDan and others have been (and are still) developing Necessitas on their spare-time, and on November 8th, last year, BogDan agreed to take his work into Qt 5 and submit the port to the Qt Project.

He pushed the first version of Qt 5 for Android to a WIP branch on January 4th, and recently we integrated into the "dev" branch, meaning that it will become part of Qt 5.1 when it is released.

For this preliminary release, we are focusing on the developer experience, working to enable Qt developers to easily run and test their applications on Android devices. While there's nothing preventing you from deploying your app to an app store with Qt 5.1, we're recommending that people wait until Qt 5.2 before they do that, as we'd like to put some more work into improving that experience: Making more options for how your app is deployed, adding more polish in general, and adding more support for Android APIs, both by allowing you to extend your app with Java code or by mapping them in C++ APIs, whichever makes the most sense.

On to the demos!

To start off, here's a video of the Qt 5 Cinematic Experience demo running on (from left to right): a Nexus 4, an Asus Transformer Pad TF300T and a Nexus 7. The Cinematic Experience demo has quickly become our demo of choice at events, because it nicely shows a lot of the new graphical capabilities in Qt Quick 2, such as shader effects, particle effects, the new PathAnimation as well as the hardware-accelerated SceneGraph architecture underneath, which makes it possible to run all this at 60 fps. 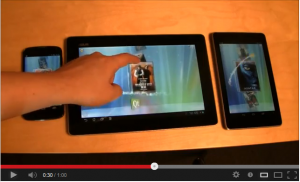 In addition to the core parts of Qt, we also support the QML media player APIs in QtMultimedia. Here's a nice video player written by Andy in QML, with fragment shader effects on top of the video, running on an Asus Transformer TF300: 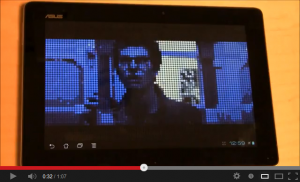 To show off multi-touch support, here's a simple hand painting demo running on a Nexus 4. This also shows the support for native menus:

The lowest Android API level supported by Qt 5 is API level 10, aka Android version 2.3.3. This means we can also have Qt apps running on reasonably priced devices, such as this Huawei Y100:

Here's the overview of what we have right now:

In addition, we plan to soon support the possibility of distributing the Qt libraries through the Ministro distribution tool, which allows you to share a set of Qt libraries across several apps on a device, and which will be the primary way of deploying apps with Qt 5.1. Other than that, this is all already available: Just check out the wikifor instructions. Let us know if anything goes horribly wrong. We can usually be found in the #necessitas channel on the Freenode IRC servers.

What's next, you ask? You can in fact help us decide! Both by reporting your bug findings and feature expectations to us, and by contributing your code. We will be working steadily on improving Qt 5 for Android, and would benefit greatly from your feedback. In the wiki, we are also compiling a list of devices where Qt has been verified to run. If you take the time to add devices you have tested to the list there (as well as any issues you have found), it would very much be appreciated :)

Finally: A big thanks to BogDan Vatra, Ray Donnelly and everyone else who has been contributing to the Necessitas project for the past years, as well as Qt 5 for Android in the past months. And thanks to everyone who will contribute in the future.