Qt Creator 2.8 provides a couple of new value additions for Qt Enterprise users. We would like to emphasize that this does not restrict the usage of the tools in our open source offering. In this release the focus is on QML and Qt Quick support.

The new extension plugins to the Qt Quick Designer and the QML Profiler add new features on top of the existing plugins.

This means smoother Qt Quick application development in the designer by:

Inline Editing in the Form Editor

The user can double-click objects in the form editor to edit their text, color, or source properties. This is quicker and more convenient than using the property editor.
Because some QML types have several of these properties, such as TextEdit, you can also right-click objects to open the inline editors from a context menu. This feature also works on custom components if the properties follow the naming conventions from the Qt Quick Items.

The visual path editor in Qt Quick Designer allows changing the path in PathView much faster than in the text editor. You can move the control points to change the cubic Bezier curve. This speeds up the process of creating the path by a magnitude when compared to text or importing them from other tools. It is also possible to add and remove segments from the curve, and PathAttribute and PathAttribute elements defined in the text are preserved.

Connection View
The Connection View is a new pane in the sidebar like the property editor and navigator. It allows the user to manage Connections, Bindings and dynamic properties through a graphical interface.  Each of these three functions has its own separate tab.

The connection tab handles Connections elements, binds them to a target item and executes an action by defining a signal handler. No need to edit QML code anymore, just trigger state changes based on clicked signals.

Add, edit and remove bindings in the bindings tab. You get also a nice overview of the existing bindings, which might have an impact on the layout or even the performance.

The tab for dynamic properties allows to add additional properties to an item.
This makes it possible to follow good practice and define values like margins in one place, reusing them in other places by using bindings, instead of hard coding them. Another use case is creating reusable Components; in this case the properties of the root item define the interface. 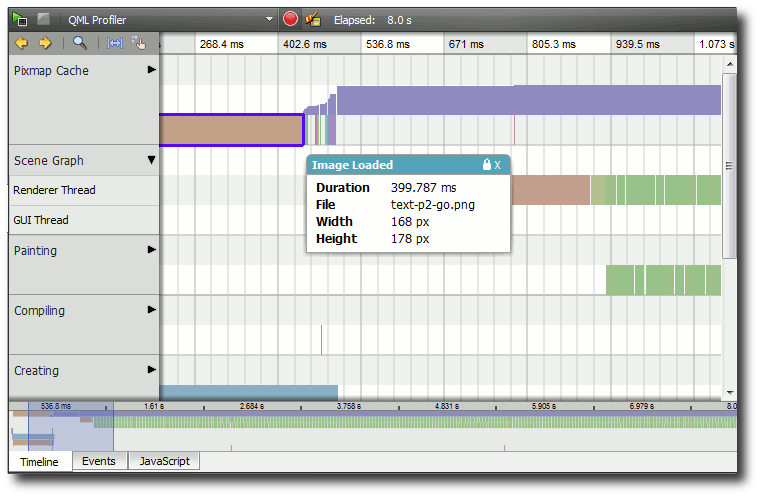 The QML Profiler is extended by the ability to trace Scene Graph events and to profile the size of the pixmap cache used for images in QML.  This is very valuable information, since memory consumption is typically related to image resources.
The SceneGraph row shows the events of the Qt Quick 2 SceneGraph renderer, split into GUI thread and Renderer thread parts. This allows a detailed analysis of the SceneGraph behavior for a given application, helping to fine-tune your QML code to achieve the best performance.
The pixmap cache row shows the loading, adding, and removing of pixmaps from the Qt Quick internal pixmap cache over time. This is especially helpful for Qt Quick applications in a resource constrained setup with slow disk loading.