We are happy to announce the release of Qt Creator 4.3.0!

For Qt Creator 4.3 we integrated a code editor into Qt Quick Designer. This allows you to use the Properties editor and the Navigator also while editing code. Additionally, you can split the view to show both the graphical and the code editor, and directly see how a change in the graphical editor affects the code, and vice versa. Of course, you can still use the code-only editor in the Edit mode as well.

There have been many more improvements and additions to Qt Quick Designer, like better support of stacked containers and a new tool bar for common actions. Please take a look at the blog post that focuses only on what is new in Qt Quick Designer.

If you use Qt Creator with CMake 3.7 or later, we now use the server-mode that was added to CMake 3.7 for the benefit of IDEs. It provides much better information about the project structure, include paths, and more, than what we could parse from the generators and Makefile before. As a result you also see products and targets in the project tree and can build them individually.

Regardless of CMake version we added header files to the project tree, even if they are not listed explicitly in the project files. You now can also import existing builds of a CMake project, like we already provide for QMake based projects, which sets up a kit with the information found in the CMake cache from the build, and registers new toolchains and Qt versions as needed.

If you are coding in C besides C++, or use files in different (sub-)projects with different defines, you will find a new feature in the C++ editor helpful: If a file is used in different contexts, a drop down menu appears in the tool bar on top of the editor, that allows you to choose the (sub-)project and language that the editor should interpret the file in (documentation).

If you are up for a bit of experimentation, enable the ClangRefactoring plugin. It adds preliminary support for clang-query to Advanced Find and uses Clang for the local renaming refactoring.

Our CDB support for debugging MSVC code now uses a Python based backend for pretty printing. This results in much better performance and, since it shares most pretty printing code with our GDB and LLDB backends, also in more, better, and unified pretty printers for Qt Creator's CDB support.

Note: The CDB debugging support moved to a separate, optional component in the installers (enabled by default). Unfortunately that means that if you use the online installer to update to Qt Creator 4.3, this new component will not be installed. You have to restart the maintenance tool, choose "Add or remove components", and install the Qt > Tools > Qt Creator CDB Debugger Support component to get it back. 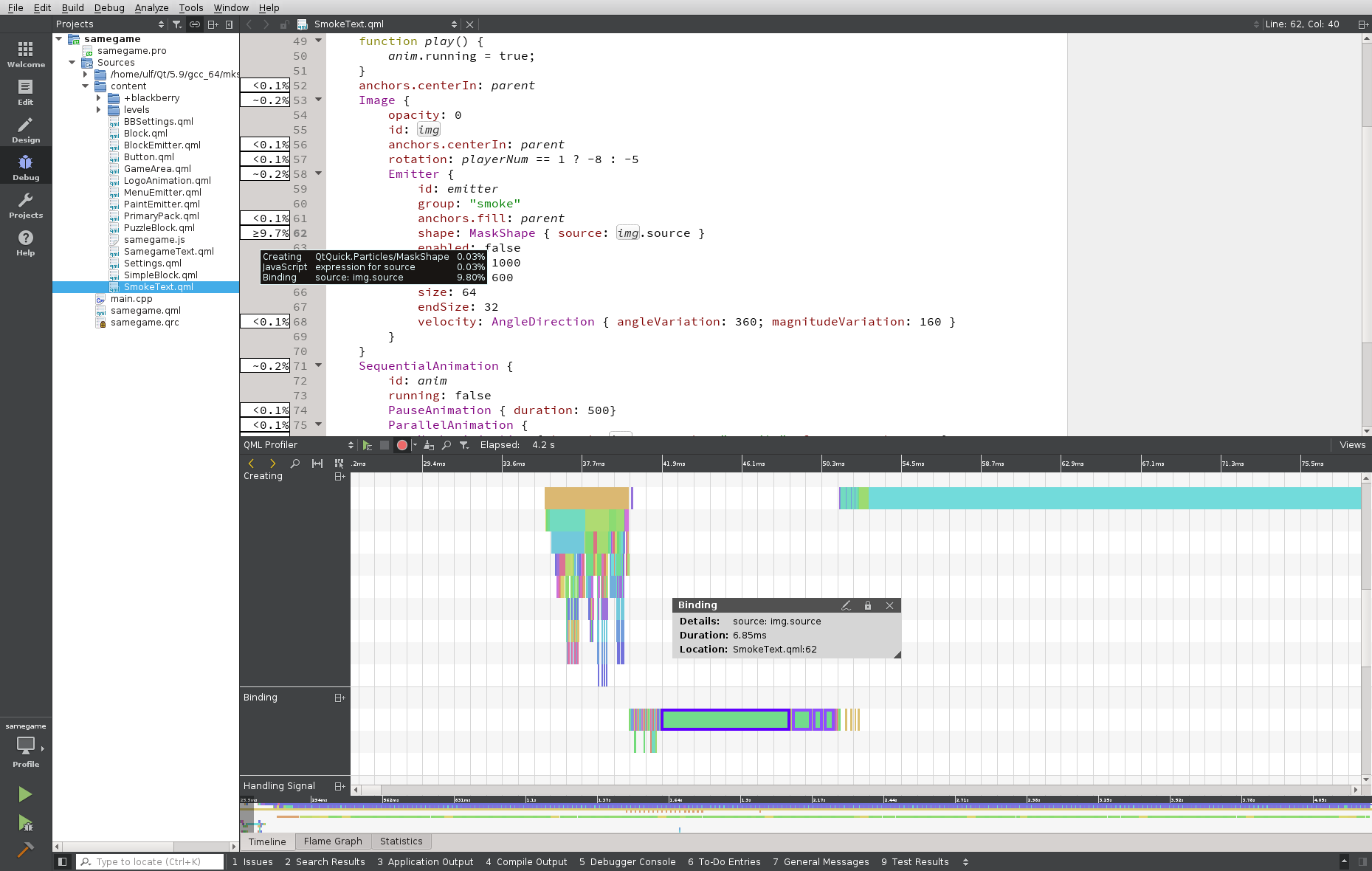 When you profile your Qt Quick application with the QML Profiler, you see performance information now also directly in the QML code editor. The profiler itself received many performance improvements as well, and many smaller UI issues were fixed.

Qt Creator 4.3 fixes the issues created by changes in the Android SDK version 25.3.1.

If you use Qt Creator for iOS development, you can now choose the developer team and provisioning profile used for signing. This overrides the default that QMake chooses and any settings you have in your project files.

There have been many more improvements, which are described in more detail in our change log.

The opensource version is available on the Qt download page, and you find commercially licensed packages on the Qt Account Portal. Qt Creator 4.3.0 is also available through an update in the online installer. Please post issues in our bug tracker. You can also find us on IRC on #qt-creator on chat.freenode.net, and on the Qt Creator mailing list.

Note: The CDB debugging support moved to a separate, optional component in the installers (enabled by default). Unfortunatly that means that if you use the online installer to update to Qt Creator 4.3, this new component will not be installed. You have to restart maintenance tool, choose "Add or remove components", and install the Qt > Tools > Qt Creator CDB Debugger Support component to get it back.