Over a thousand people, magnificent keynotes, seven tracks of talks spread over two days, twenty sponsors, fabulous evening party, what else could I ask for?

Four glorious days spent amongst the people I feel most at home aside from my real home.

First of all I would like to thank the core event team; Maria, Carl, Mira, Anu, Maximilian, Katja and Henri. You guys absolutely rock! 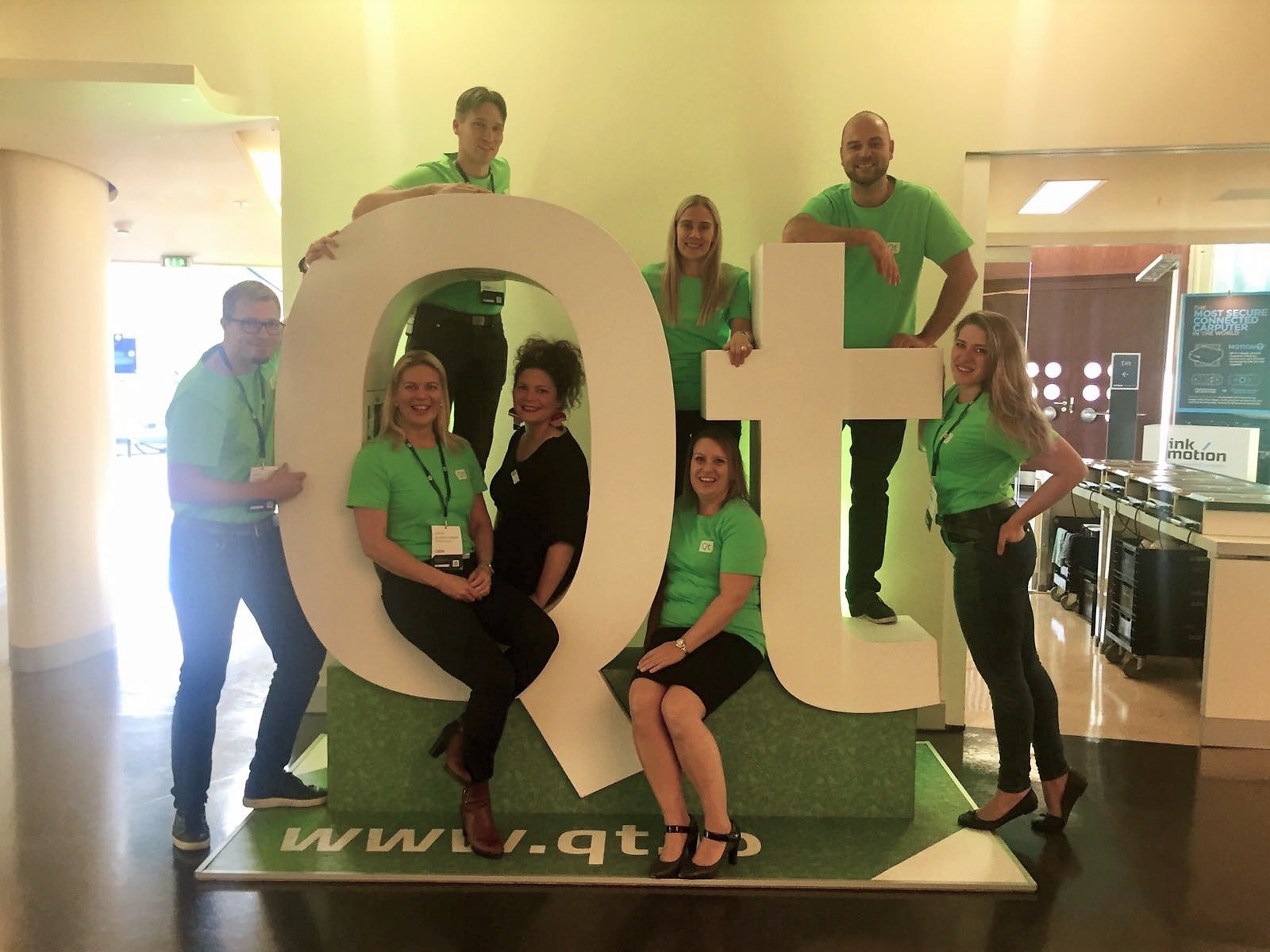 And sponsors, every single of the twenty sponsors deserves a big thank you.

Of course the event does not happen with just the core team, we had close to 50 people from The Qt Company somehow involved in booth duty, track moderation, registration, demo and customer video shooting and the evening party. In addition people to thank include partners for the venue, bcc, event management, build-up, video and still image shooting and the KDE volunteers.

But most of all I would like to thank every single person who attended the event! The event is made by the people. The feeling in bcc over the several days was one of making things happen. A positive vibe in the air, something in the sound that took over the venue on every break.

But before this post turns into an Academy award speech, let's take a look at some of the moments in the event.

Seeing the big hall of C01 fill up for the keynotes was a feeling that I will remember for a long time. During the two mornings we had some great keynotes, first our CEO, Juha, gave a good overview of where Qt is and where it is going. 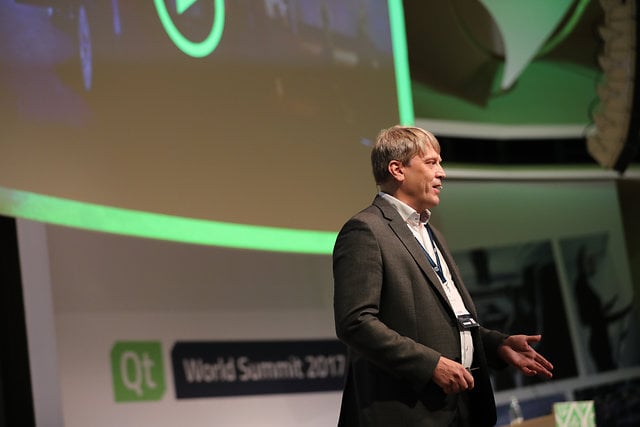 Then Dr. Steven Goldfarb took us to the limits of our knowledge, explaining how we see big and small things. And by the way, did you know that CERN uses quite a lot of Qt in their software development? 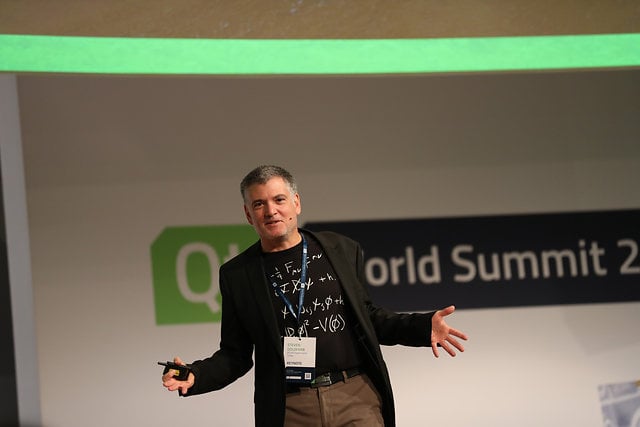 After Steven came off the stage, we had the pleasure of introducing Linda Liukas. Our whole core event team were fans of Linda before the event, but her keynote won over everyone I talked to at the event. The energy and heart that she has for teaching kids about computers, logic and programming, is an irresistible combination. 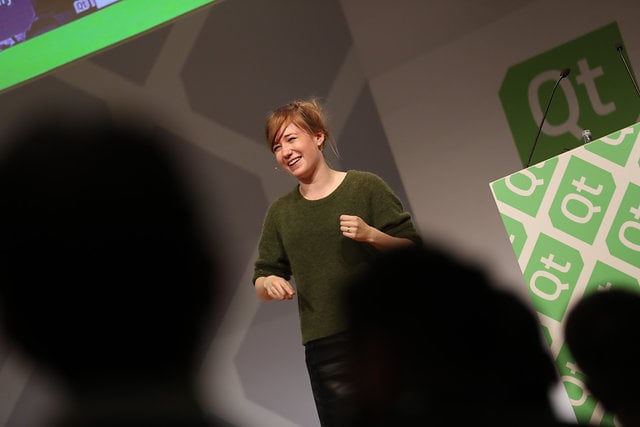 And the short keynotes from major Qt customers, telling how they see the world changing in their respective industries. Daimler, Panasonic ITS, Hasselblad, Quantitative Imaging Systems, Amazon Lumberyard and Qualcomm all told us how they have Qt at the heart of their products. 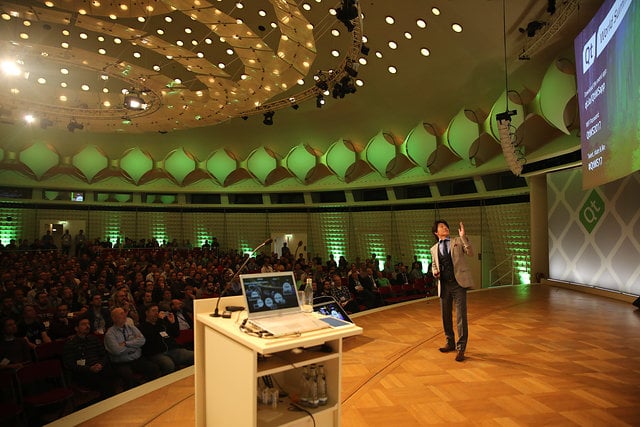 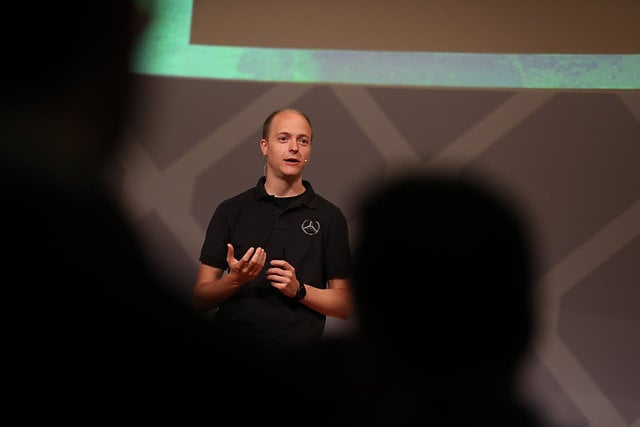 On the second day we had decided we need a high energy speaker to kick off the day and wake everyone up after the evening party.

Igor Beuker, math man in a world of mad men, got the party started, and gave us a lot to think about. 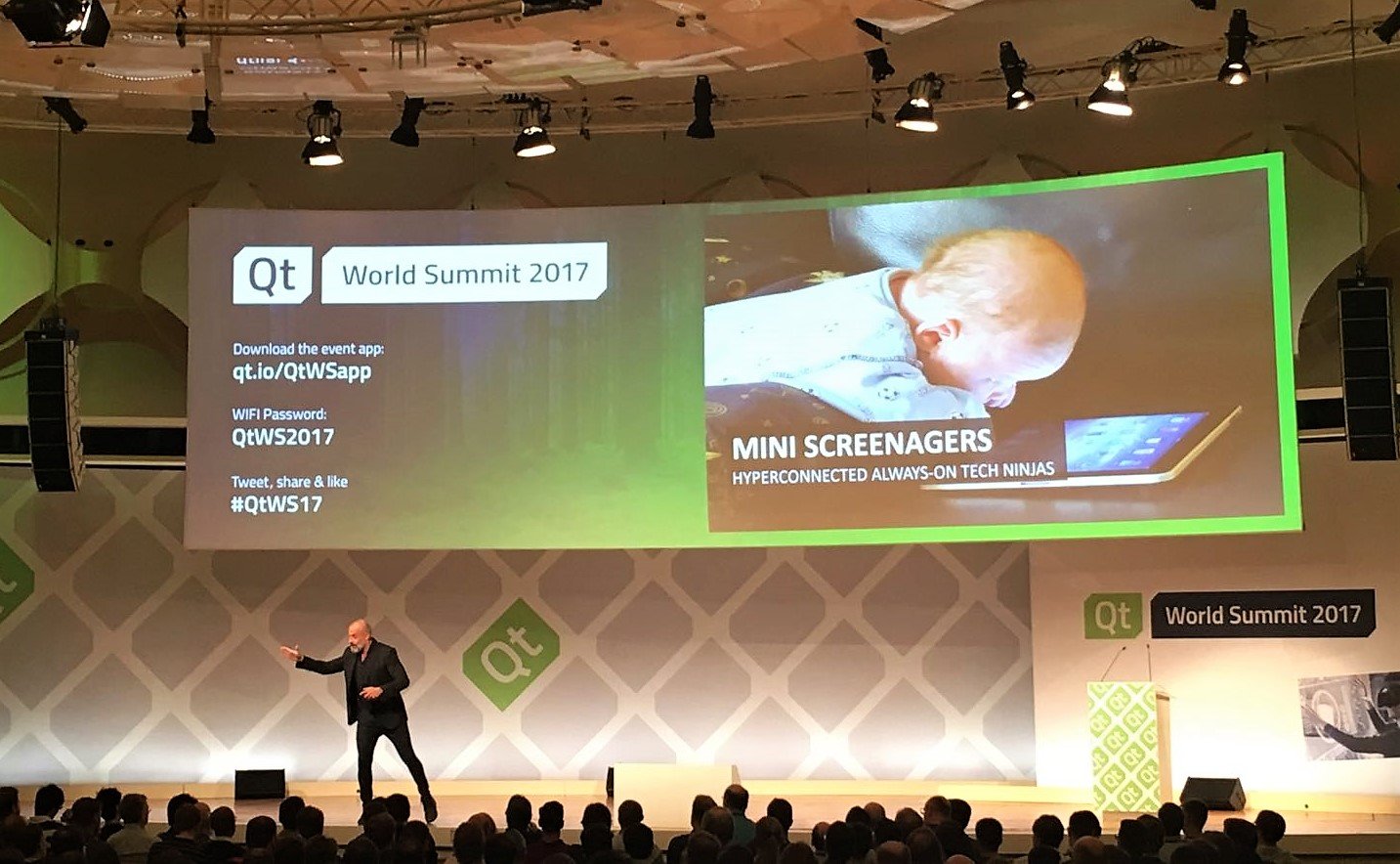 The moment many had been waiting for, was when Herb Sutter gave a keynote about some ideas he personally has on the future of C++. "Life is too short to spend it writing abstract base classes", a sentiment that I completely agree with, not that I have written many abcs lately. 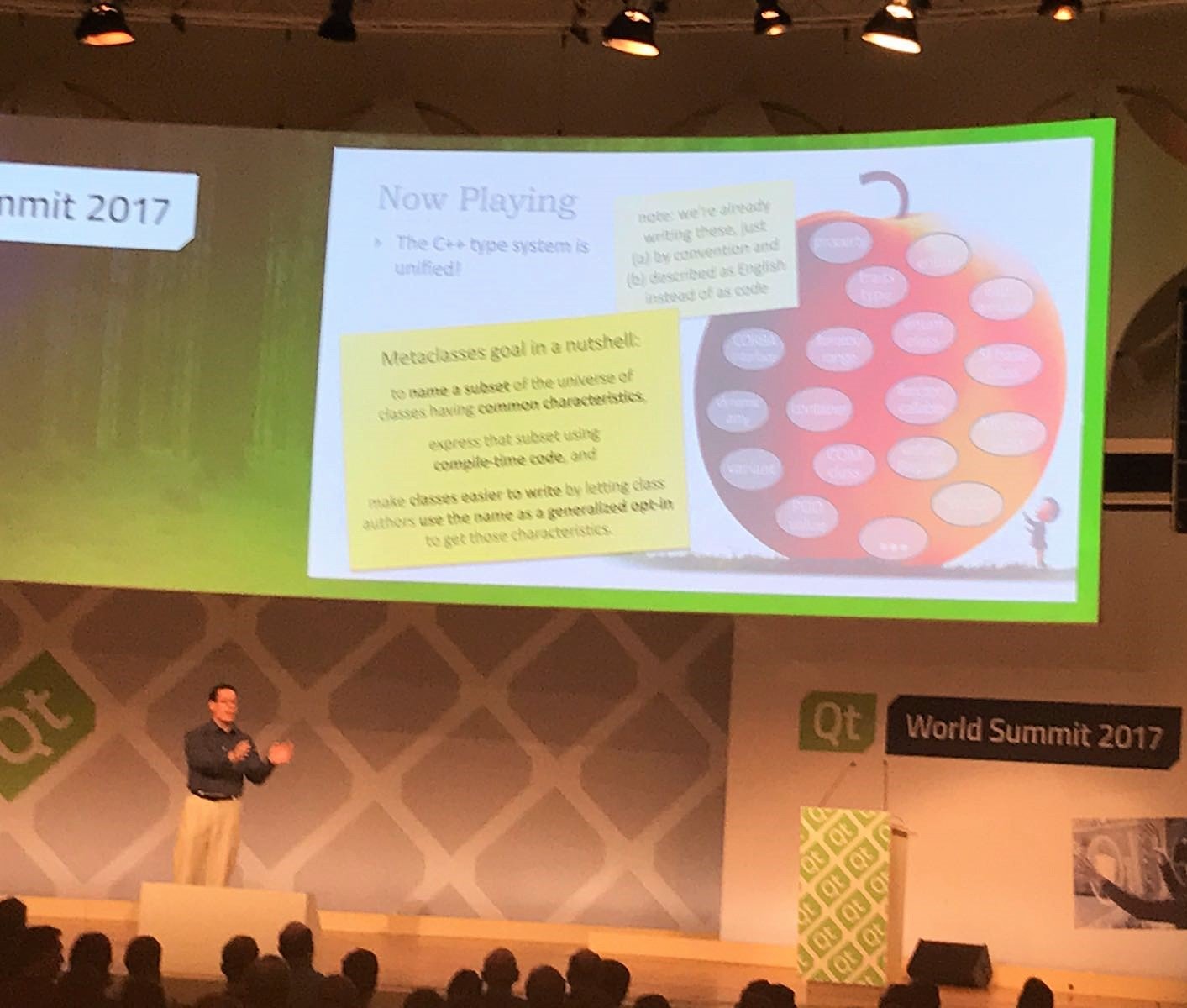 Sessions and the show-floor

Aside from the keynotes we had two days packed with presentations ranging from hard core 3D graphics to the business benefits of going with QML rather than other solutions. The idea was to have something for everyone and I think it worked out as it should.

Someone told me that when we two years ago told at the Qt World Summit 2015 that we are going into automotive, they had been wondering about the decision. Now that we this year had the Daimler EQ concept car on the floor and major speakers from the automotive industry, they were quite convinced about the decision and eagerly waiting what will happen in the medical and automation areas in the coming years. 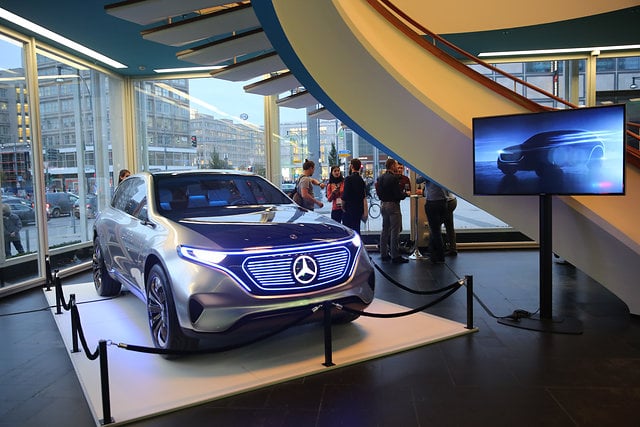 The only bigger issue I saw and heard was that some rooms were too packed with people. I and the people running bigger events know this problem well. With one large keynote hall and multiple smaller rooms, there are bound to be times when some talks draw a large audience and some rooms are less full. We knew that the Application Development track would be an audience magnet, which it was, and placed it in the large hall. However the Technical Deep Dive room was also continuously bursting from the seams. There really is no easy solution for this. We didn't want to go to the option where people need to pre-register to talks, as planning your day as you go along is something most everyone does.

I didn't catch many talks, but the glimpses I saw sounded really good! There is a lot of effort in preparing a good talk, and from what I heard, the speakers had done their homework.

I know the thing everyone is asking right now is, when will the talks come online for viewing? Especially the Technical Deep Dive talks, as some people could not get in. Don't worry, we plan to have the talks available for you really soon. We just need to do some quality checking and then we are good to go.

I already thanked the sponsors, but you can never do that enough. Aside from helping make the event happen, they every year bring cool demos and products for everyone to try out at the event. So thank you to KDAB, e-gits, froglogic, ICS, Luxoft, ISB, mapbox, Intel, basysKom, IncreBuild, Link Motion, Viking Software, Esri, HARMAN, woboq, Toradex, Witekio, Garz & Fricke and sequality! 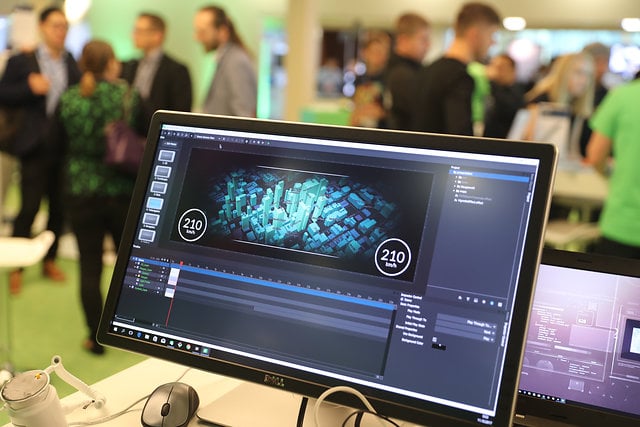 The evening party after the first day was awesome! I have Maximilian to thank for that, great job. Several people told me it was the best evening party at Qt World Summit ever. And I have to agree. Good music, food, drinks, surfing, fussball, a lot of old and new friends and music visuals built with Qt.

Before the Qt World Summit we had two days of Qt Contributors' Days, our annual event for anyone who has contributed to Qt. The days gathered about 150 contributors to talk about topics ranging from community activities to technical details in QtCore. I personally like the Contributors' Days, the feeling is that of old friends coming together to have deeper discussions for two days.

And for the future, the Qt Contributors' Days are not that technical, there is content that normal experienced Qt  developers can get a lot out of, and also discussions that are not technical at all, but rather about how the community works.

I can only talk for myself, but last week was one of the best weeks in my life. On Thursday afternoon I was smiling all the time. Again, thank you to everyone who participated!

I met old friends and made new ones, I think that is the mark of a good event!

Save the Date for Qt World Summit 2022