We are happy to announce that Qt 3D Studio 1.1 has now been released. This release introduces many improvements to the user interface and introduces an improved way to define data driven UI content.

As we have been gaining more feedback from the Qt 3D Studio users we have clearly seen that the way how application passes data to the user interface created with the Qt 3D Studio can be improved. To address this issue, we have created a new feature called Data Inputs. In 1.1. release this feature is a technology preview and it supports creating two types of data inputs: ranged numbers and text. Ranged numbers are mainly meant for controlling animation timelines. Text inputs can be used to modify the user interface text elements and control slide changes. For more details on how to use data inputs please refer to documentation 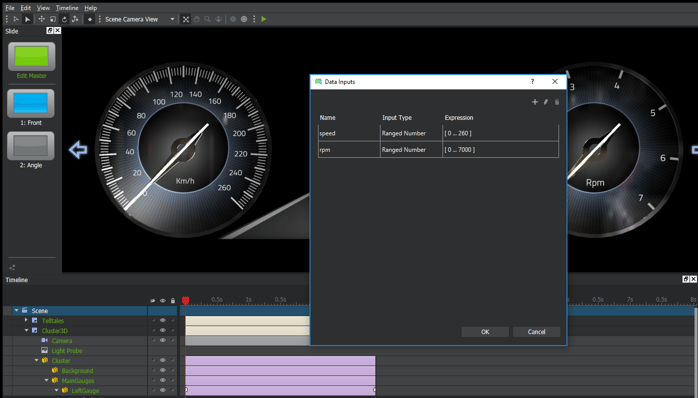 1.1 release also introduces a technology preview of the new Behavior Scripting API which enables interacting with the runtime using QML and JavaScript. Behavior scripts can expose properties which can be used to modify the script's behaviour without changing the script itself. Furthermore scripts can also create events which trigger user interface changes e.g. UI state changes.

Getting started with 1.1 release

Qt 3D Studio 1.1 is now available through Qt online installer under the Tools section. Qt online installer can be obtained from Qt Download page and commercial license holders can find the packages from Qt Account. Some example projects can be found under examples folder in the installation directory. Additional examples and demo applications can be found from https://git.qt.io/public-demos/qt3dstudio repository. If you encounter issues with using Qt 3D Studio or you would like to suggest new feature please use Qt3D Studio project in the bugreports.qt.io