Built with Qt, Thymio Drives Learning in Robotics and Programming

Thymio II is a small robot which allows children to discover the universe of robotics and learn core concepts of programming. Designed for children and artificial intelligence enthusiasts of all ages, Thymio II is an excellent way to begin learning valuable skills quickly. Thymio has been programmed with Qt and can carry out numerous activities from basic movement and light configurations to executing complicated drawings and multi-robot performances. With Thymio, the basics of robotics and programming are opened through play, allowing for discovery and fun to drive learning.

Inspiring Technology
Developed at the École Polytechnique Fédérale de Lausanne (EPFL) in collaboration with the École cantonale d'art de Lausanne (ECAL) in Lausanne, Switzerland the Thymio II is an educational robot (priced at approx. 100 Euro). The robot is programmable using a purely-visual programming language developed at ETH Zurich, Switzerland, and all its components are open source.

The main features of the robot include many sensors and actuators, featuring educational interactivity based on light and touch, and a programming environment offering both graphical and text programming. Thymio II has over 20 sensors and 40 lights and integrates with third-party languages such as Google’s Blockly and MIT's Scratch.

The Thymio II robot is driven by an educational goal, designed mainly by universities. Other partners include The Weizmann Institute of Science in Israel and Inria in France who have contributed educational material. Mobsya, a non-profit organization, manufactures, distributes and supports the robot.

Programming with Ease
Thymio II can be programmed thanks to Aseba, which is a set of tools allowing novices to program robots easily and efficiently. Thymio II utilizes Aseba to provide several programming environments.

Thanks to Qt and Qt Creator, the visual programming environment is now going mobile, taking advantage of Qt touch support.

Both Aseba and the Thymio II robots’ firmware tools are written with Qt open source and released under the LGPL.

Thanks to Qt, Aseba can be installed on Linux, Mac OS and Windows and mobile-specific versions of visual programming run on Android on iOS.

Learn more about Aseba at: https://github.com/aseba-community/aseba

Thymio Programming Adventure
By making apparent what would otherwise be invisible, augmented reality holds a strong potential for education. Thymio Programming Adventure is an ongoing effort to leverage AR and game technologies to improve the experience of learning programming using a robot. This app takes advantage of Qt 3D and cross-platform Qt abstraction for video inputs to bring AR to mobile devices in conjunction with the Thymio II mobile robot. 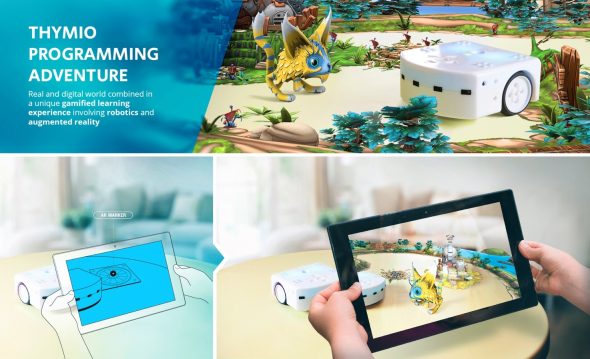 Built with Qt
Qt is a leading cross-platform development framework that is used by approximately 1 million developers worldwide. According to Stéphane Magnenat, lead Aseba and Thymio software developer, “Qt was the development tool we selected because it allows us to program once and run our software on all platforms, with native feelings for the end user.”

Qt is the leading independent technology behind millions of devices and applications across 70+ industries. Lars Knoll, The Qt Company CTO and Qt Project Chief Maintainer, said: “It’s no secret that the world needs more developers and engineers. If we are to deliver the kind of high technology future that is envisioned, the world will need more programmers, robotics experts, AI specialists to bring these visions to life. We are excited about how the Thymio II is inspiring children to program robots, ask questions, challenge themselves, and innovate at the age of seven or eight, even younger. Just imagine what they can achieve when they are fifteen, and how this extraordinary device can open technology for young people all around the world.”

About The Qt Company

The Qt Company is responsible for Qt development, productization and licensing under commercial and open source licenses. The Qt offering includes a development environment that enables the reuse of software code across numerous different operating systems, platforms and screen types, ranging from desktops and embedded systems to wearables and mobile devices. Qt is used by approximately 1 million developers worldwide and is the leading independent technology behind millions of devices and applications. Qt is the platform of choice for in-vehicle systems, industrial automation devices and other business critical applications manufacturers, and is used by leading global players in 70+ industries. The Qt Company operates in China, Finland, Germany, Japan, Korea, Norway, Russia and USA with about 200 employees worldwide. The Qt Group is headquartered in Espoo, Finland and is listed on Nasdaq Helsinki Stock Exchange. The company’s net sales in year 2016 was 32,4 MEUR. To learn more visit http://qt.io